After last week's Mayhem game, one of the guys asked "why couldn't this be a skirmish game?".
Why not? A stand of troops just becomes a single mini.I statted up my usual suspects who have seen many a skirmish rules set: Song of Blades and Glory, Pulp Alley, GASLIGHT, Mordhiem, the list goes on and on....
This fight would have two sides with 3 players each. The evil faction consisted of Orcs, Barbarians and Chaos.The good, Elves, Humans and Norse.

Sir Boris and his Retinue. 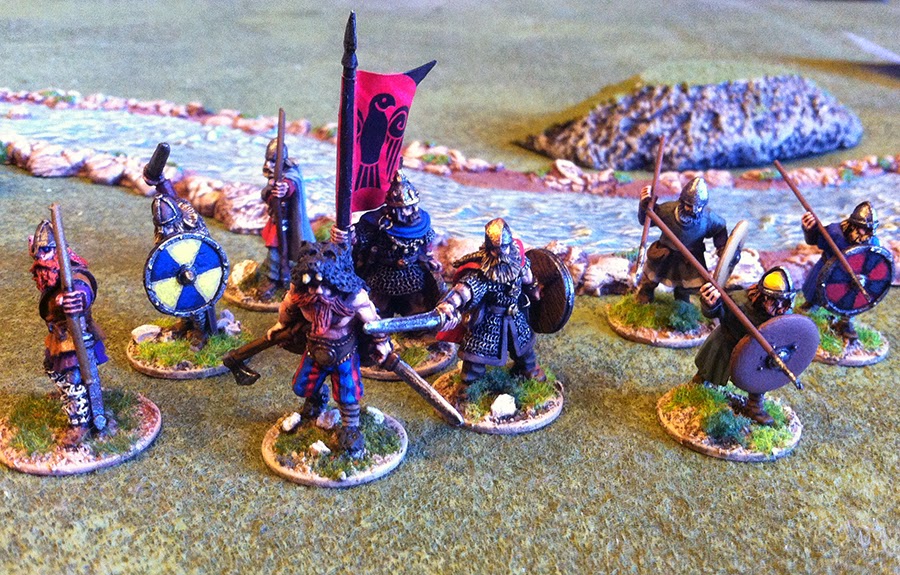 Inaar Redhand and his men 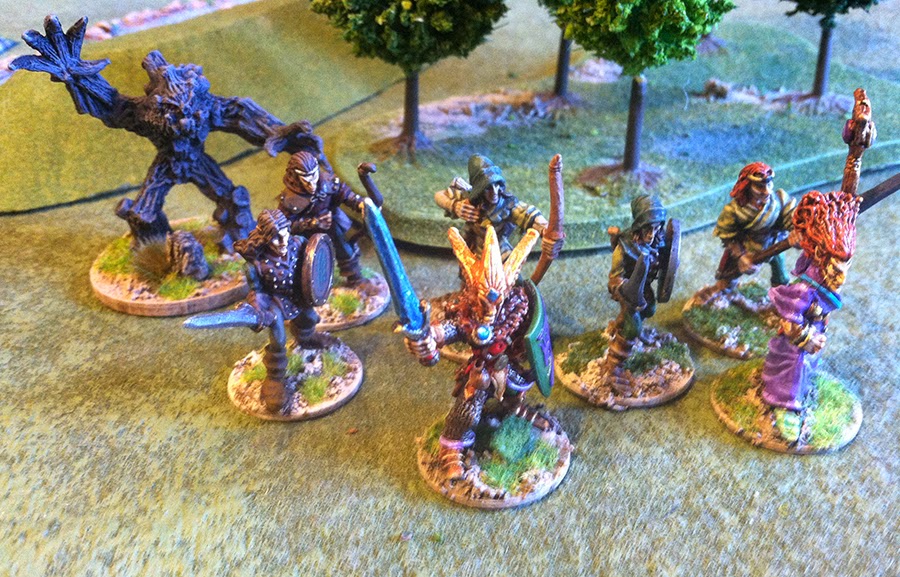 Aeleorth and the his silvan brothers 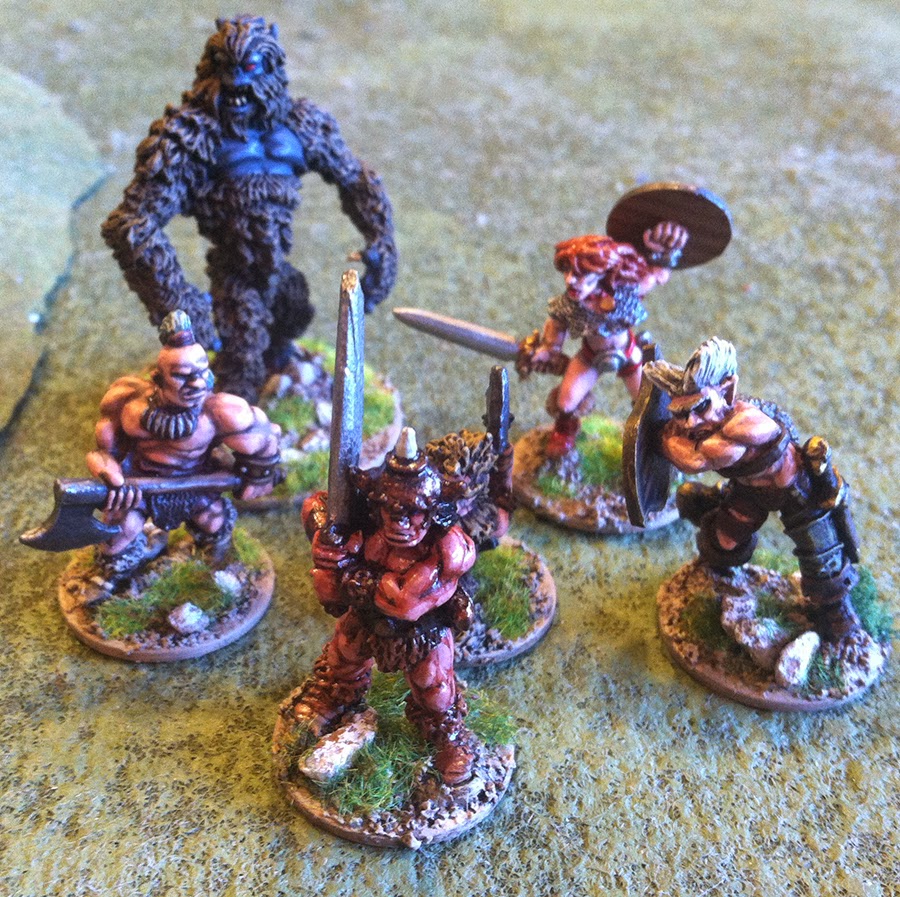 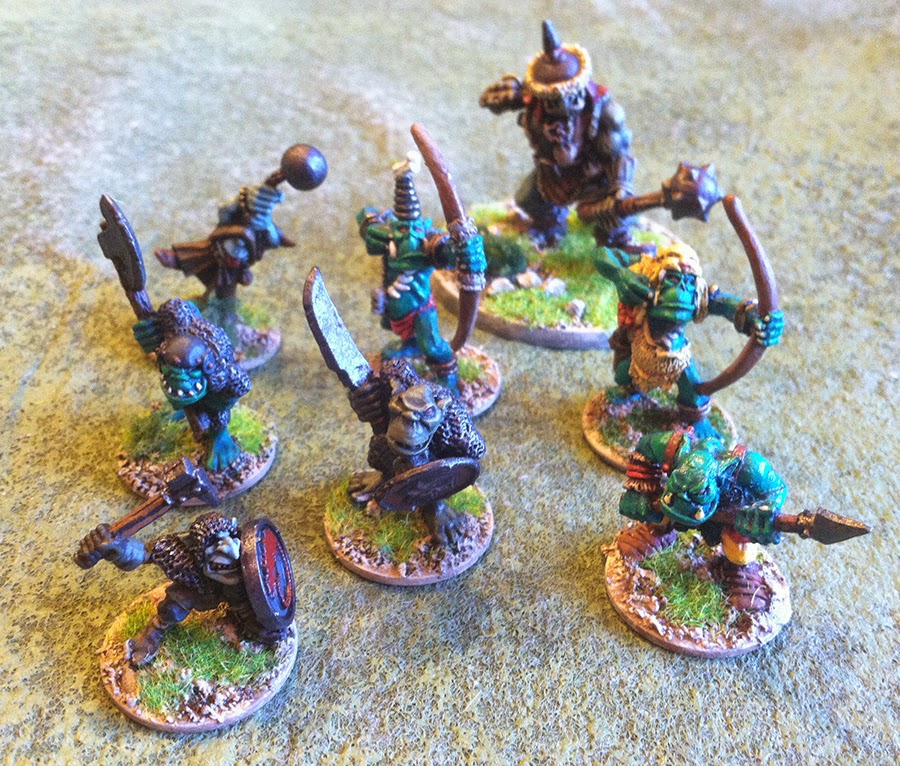 Krug the Ogre and his greenskins 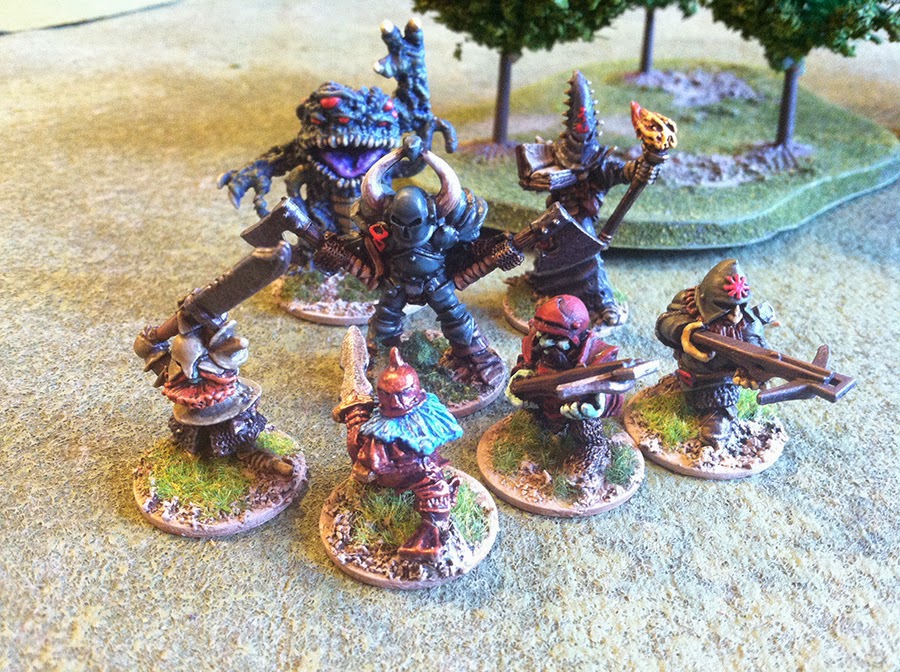 Malldor the Blackhearted and fallen dwarves
At a bend in the river stands the ruins of an old church. Over the years evil has crept into the this part of the land. The old church has now become a site for Chaos worship. Players have to not only claim this site but another in each of their start zones.
The forces of evil went first. My barbarians risked a leader roll and got a one. We let up to 3 models within 1" of each other use the "advance" rule so I at least got 3 guys moving.
The Orcs got to the ruins first. There they took on all comers.
My boys were the first to break. They took out a few of the enemy, but the mounted knight proved our undoing. 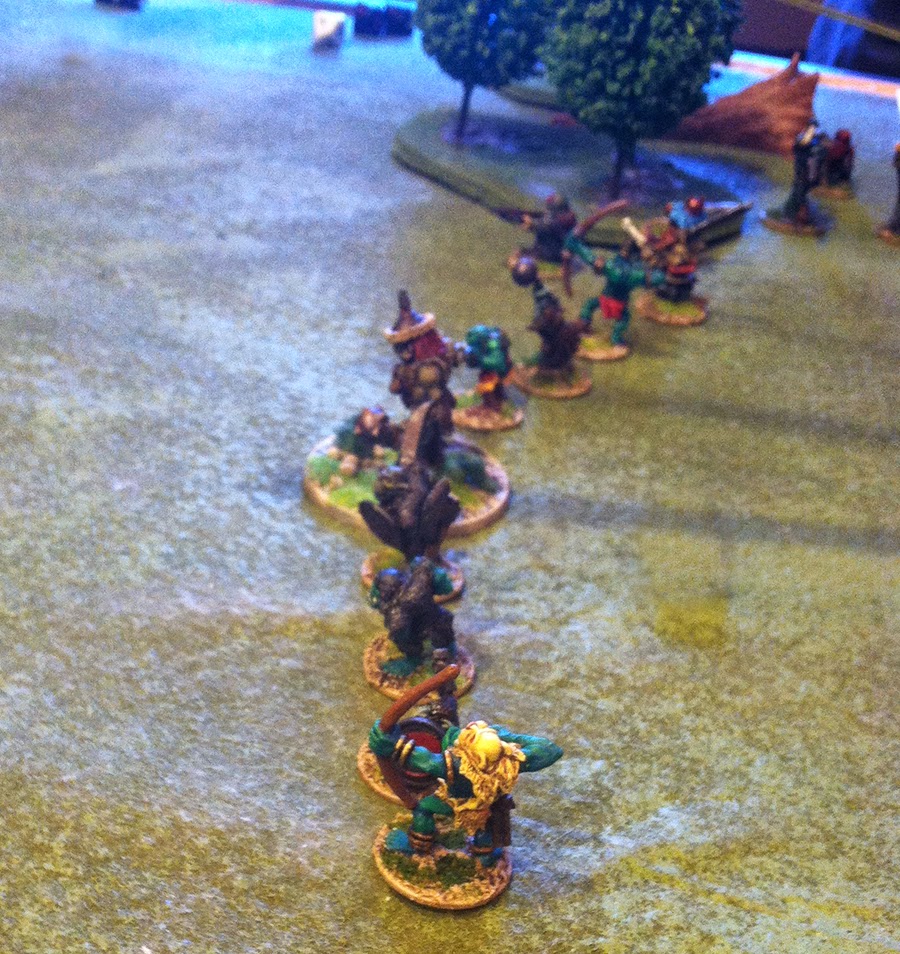 Evil gets on the move 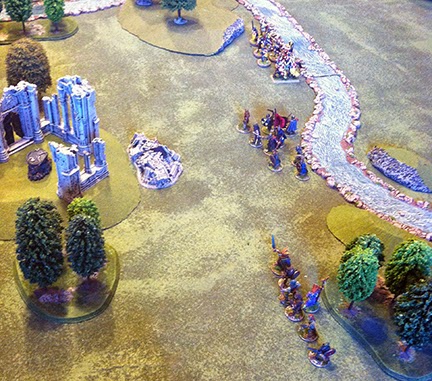 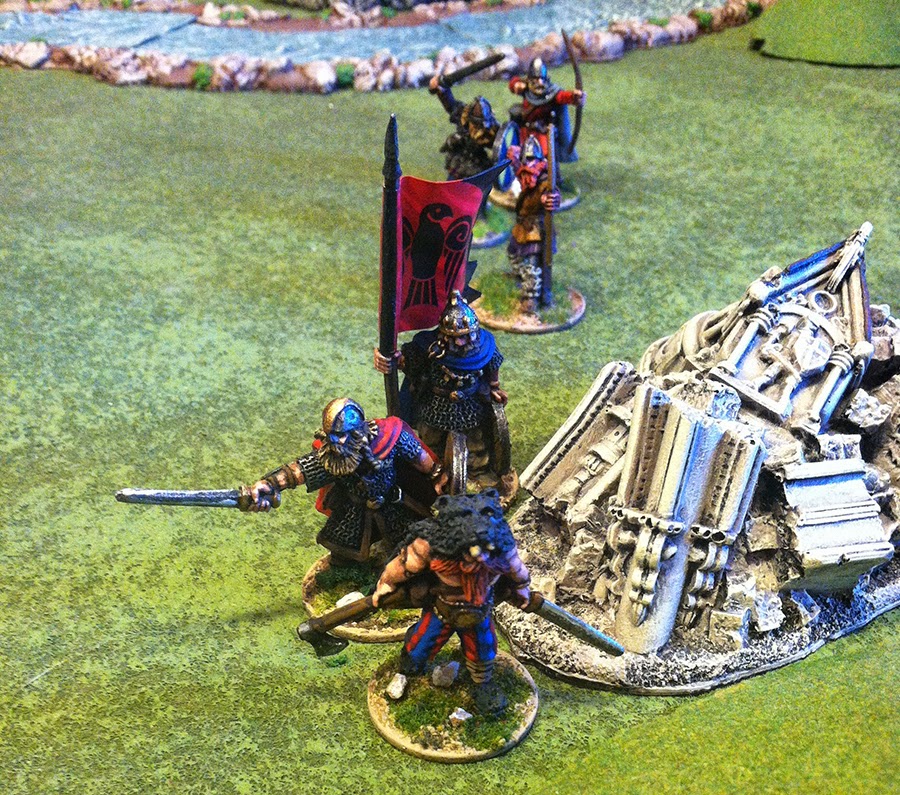 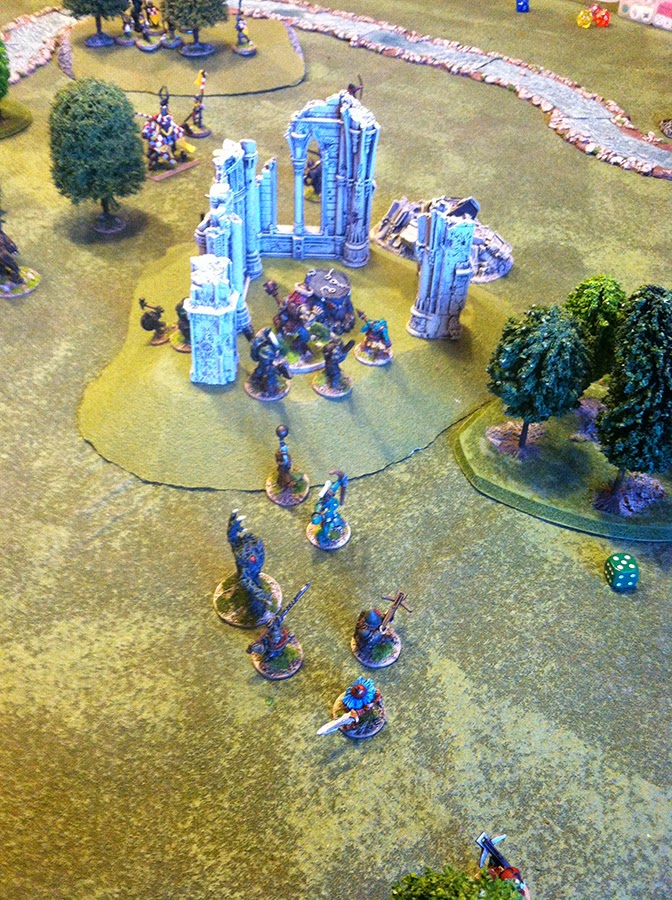 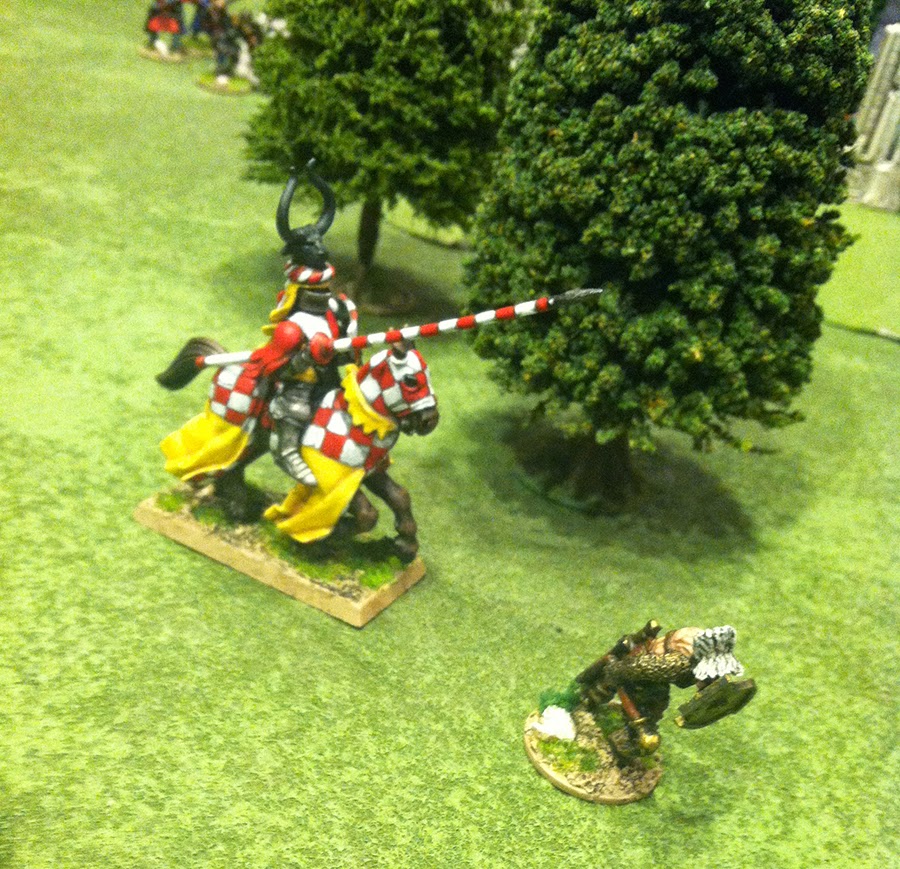 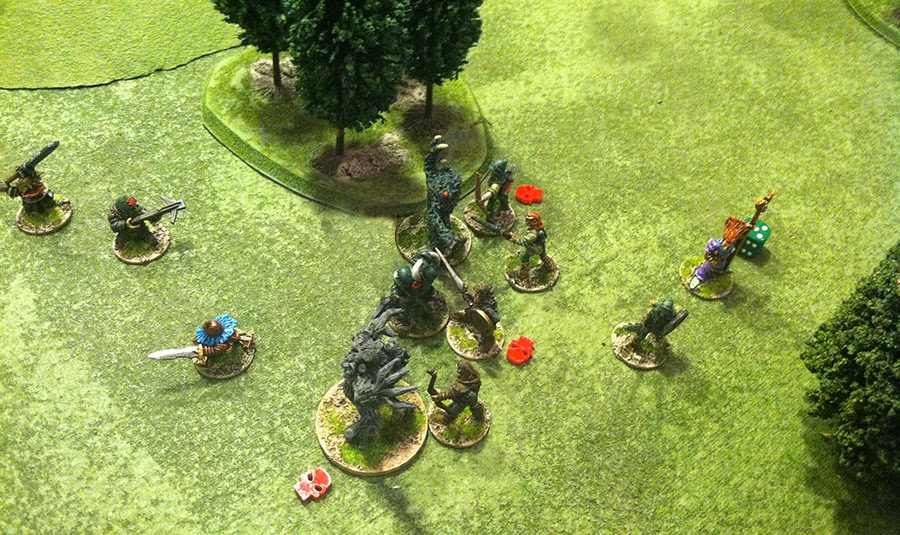 The elven sorcerer failed his Summon spell so miserably that the Chaos wizard got to steal his summoned Ent and use it against them.
The only thing we changed were the rules about leaders. They fight, and the game doesn't end when you lose them. A new leader takes their spot and the Leader die drops a level.
Movement is also less restrictive without stands.
I gotta say, this was most fun we had out of all the rules so far. There is something here....
Posted by BaronVonJ at 7:45 AM

Brent Spivey (Mayhem author) mentions on his site he is working on a skirmish system that incorporates some of the Mayhem engine. . .

Beat him to it.

Out of Curiosity (and wanting to get one) where did the Korgoth player get that yeti looking mini?

This just dawned on me yesterday, that Mayhem should work great as a skirmish game. I contacted Brent and he pointed me here. Looking forward to giving this a go of my own!