Fantastical night of Fistful of Lead

Taking a break from Big Battles play testing (or is it Bigger Battles?) to play some Fantasy FfoL.
The small village of Little Tugwaddle sits between the rivers Tug and Waddle. It's quiet green fields perfect pickings for the dark creatures that lurk beyond the forest. 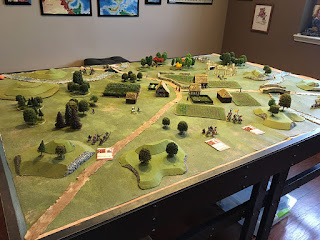 Word has reached Sir Roderick of an eminent attack. He calls upon the good folk of the neighboring lands to come to the defense of his lands. The Good guys: 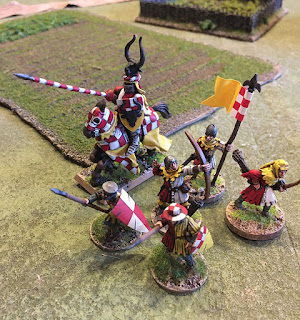 Sir Roderick and his retinue. Loyal men all! 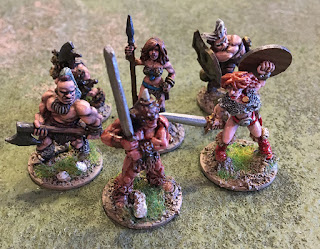 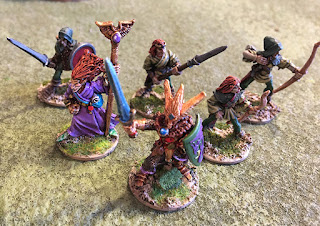 Lord Aelaroth from the forest. It is he who alerted Roderick to the impeding threat. Rangers all. 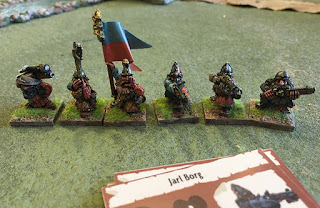 Finally, Jarl Borg, armed to the teeth from the Murican Hills. Steady dwarves for a fight.
The Bad guys: 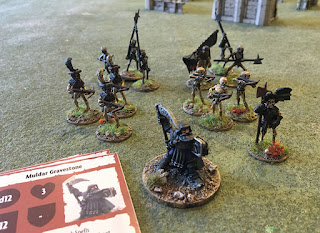 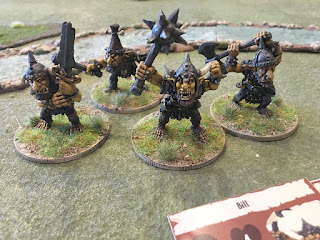 Bill and the Bugbears boys. Large beasts, for sure. 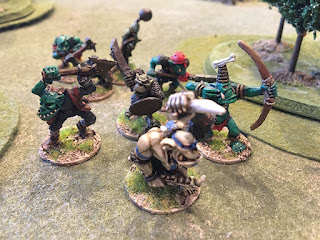 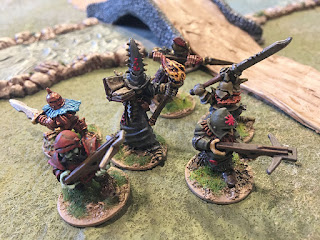 The Foul Lord Valdamyr and his Fearless Chaos brethren.
Seven players. The Good guys got Renown for protecting the village, while the Baddies got points for burning, killing and looting. 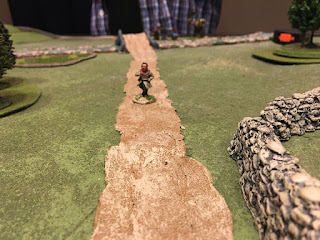 "Run!" yelled Jimmy Pickles. "Run, the monsters are coming!" A cruel bolt from a Chaos Dwarf crossbow silenced him. 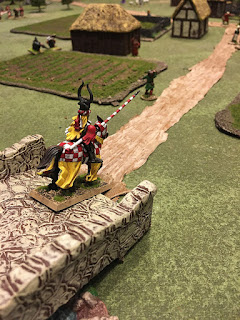 Sir Roderick gallantly charges across the bridge. "I'm here to save you, lowly peasants!" 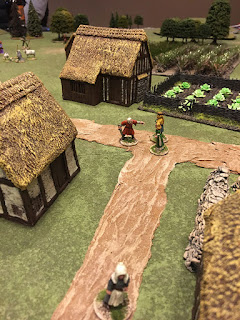 "I say, what's all the ruckus about. Get back to toiling!" 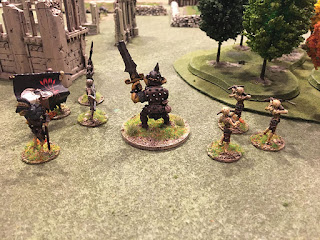 The forces of Chaos, Death and Destruction approach. The Necromancer chose the Horde trait for his retinue. Lots of troops at poor quality. Brian the bugbear spots the "Bloke on the purty 'orse. 'Orses is good eating'." 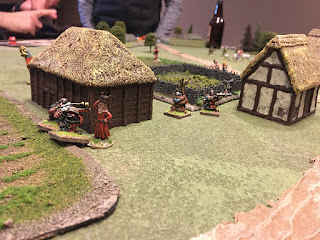 "You should get inside ma'am. Things are going to get loud and messy." The Dwarves have the firepower, but have to take time to reload. Meanwhile the barbarians have no ranged abilities but will certainly kill anyone they beat in combat. 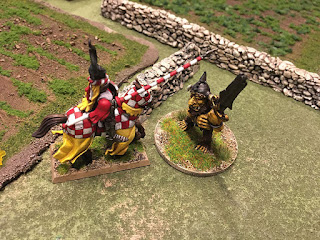 Brain gets skewered by Sir Roderick. But soon attracts the attention of the skeleton crossbows. His armor saves him from certain death, but the Shock piles up. Just in time to be ensorcelled by Gravestone. His accumulated Shock makes makes it hard for him to resist the Necromancer's gaze. He is soon Helpless... 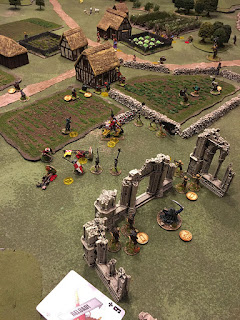 A lot going on. (markers on the field to show the level of violence. They would normally be kept on the player's character cards). Spellcasters must rest between spells. This is just like the Reload rules. 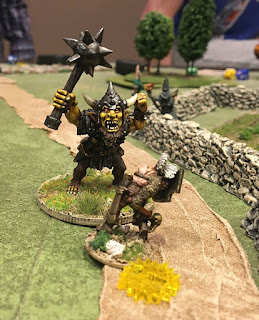 All his bugbear brothers are dead. Killed by gunfire or dirty elvish trickery. Bill goes on a rampage. His great mace is soon covered in gore. 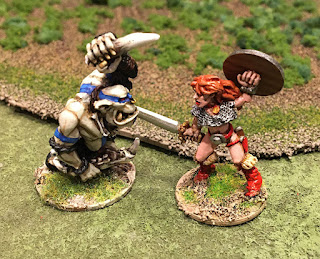 The Orc shaman discards his spells for some hand to hand combat (he has to since he's Bloodthirsty). Red Tonya never had a chance. Her armored bikini was no match for Orc ferocity. 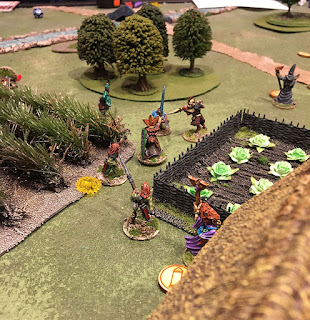 The Elves never seemed to make it past the "Cabbage Pack of Death". Many would fall. Lord Aelaroth must of forgot his folk could ignore terrain, and became mired in a melee they were doomed to lose.
Sir Roderick, helpless, fell to the blows of Skeleton halberds (technically he ran off). Leaderless his men died under black bolts from undead archers.
Dwarven marksmanship (Marksdwarfship?) left much to be desired. Jarl Borg himself dead from a cloud of goblins grunts.
Meanwhile, the Barbarians showed so much promise. On paper they would almost always kill whatever they hit. The problem was the hitting, which they almost never did. Soon the village was ablaze. Corpses were raised to join the Undead legions while no one wants to know what happened to the villagers under the Chaos horde.
Great game. The poor good guys had truly abysmal die rolling. It just wasn't their day. Some nice moments in the game. We used the "Gruesome Kill" rule where any wound result of 10+ means any friends with 6" of the victim take a Shock marker. And to speed things up, any miniature with MORE shock than remaining wounds retreats.
Other than that, no real changes to rules people already had. Retinues were built like any time period. The follow up battle will see if Our Heroes can stop the evil tide. 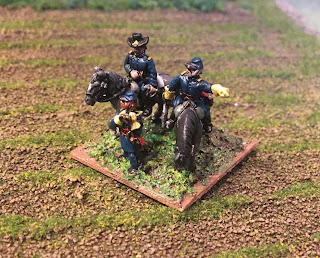 Not often I get some wargaming in with the Boy, so when he announced he had Sunday afternoon off, we jumped at the chance to get another play test in for Fistful of Lead: Big Battles. 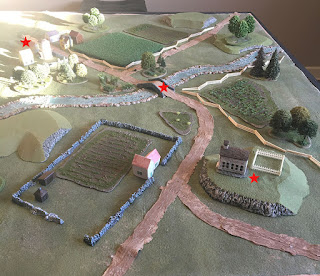 This round I wanted to see how using stands of minis vs single figures in a unit held up, along with the Heroes. I dug out my truly ancient 15mm ACW stuff, originally based for Fire & Fury. Most of these guys were some of the first historicals I ever painted and they have seen much blood.
We each had a Commander, 4 units for Infantry, 1 of Horse and a Hero. This meant 7 cards a piece. There were 3 objectives. Each turn a unit held an objective they earned one victory point. We would play to 8 turns and check to see if the day ended.
We built our units, arming them with traits. My Rebel force I designed pretty Close Combat ready to reflect their willingness to close up screaming the Rebel Yell, while my son made his Yankees decidedly "shoot". Lastly, we rolled randomly for unit leader traits. This is a fun way to add some character and sometimes throw a monkey wrench in your plans. The Boy got a Leader that ran off as soon they took fire. 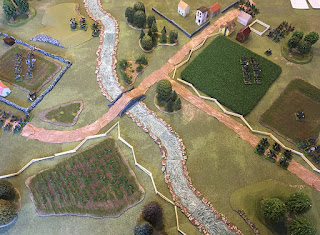 The Bluebellies got the jump with a bunch of face cards. One unit had the Ranger trait allowing them to cross the fields of crops at full speed. 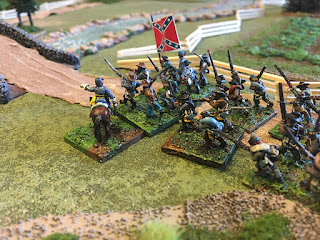 But, joined by their Hero, one of my units captured on side of the bridge. They quickly formed up and started blasting troops across the stream. 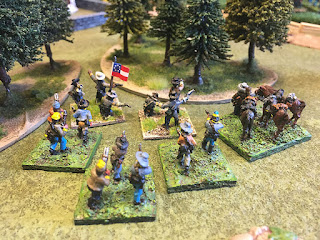 My cavalry dismounted to enter some woods across from the town. 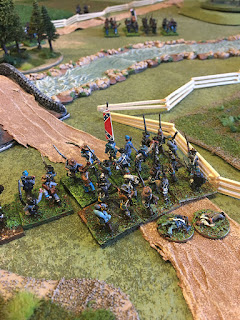 My brave boys at the bridge took Wound (remove a stand or miniature) and 2 shock (here represented by casualty markers). They lost their fearless leader in the fire. Yes, he really had the Fearless trait. The shock reduces firepower for every shock marker. in this case, the 7 stands would only roll 5 dice. 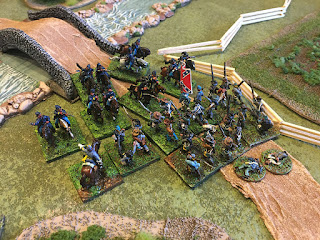 That's when the US cavalry arrived! Poor bastards. My attached Hero not only threw in some extra dice for us, but his trait allowed us ignore Shock in Close Combat. we rolled a whopping 10 dice to the Federals 6. 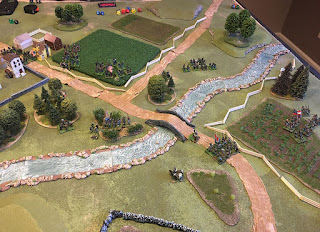 The beginning of the game made it seem like a crushing Rebel victory. By turn 5, though I had the edge in points, I had lost most of my troops. The cavalry in woods were crushed by fire and follow up charge. The boys at the bridge just couldn't hold on.
All in all, a really fun game, with lots of swings.
Designer notes: This is NOT a historical recreation of the Civil War. It won't be for everyone. Like all our games, it was meant to have a Hollywood feel to it. You don't have to play with Heroes, but the Heroes did heroic things.
Assigning traits to units is what really makes them distinctive. Using the right unit at the right time makes all the difference.
Posted by BaronVonJ at 8:31 AM 9 comments: 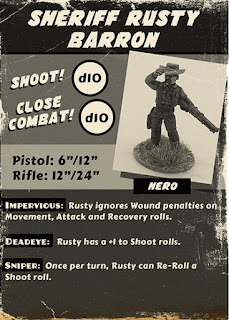 The Hero of the Month, Sheriff Rusty Barron. Veteran of many a Fistful of Lead skirmish. Don't get on the wrong end of his Winchester!
Miniature is a Pulp Figures Movember charity figure.
Posted by BaronVonJ at 10:16 AM No comments: