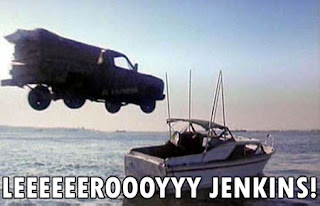 Don't you just hate it when life, your job and everything else gets in the way of gaming? The above picture is how I feel right now. A lot of pans in a lot of fires, and no painting of tiny lead men to relieve the stress anywhere in the immediate future. Pray for the Baron, loyal subjects.
Posted by BaronVonJ at 1:51 PM 5 comments: 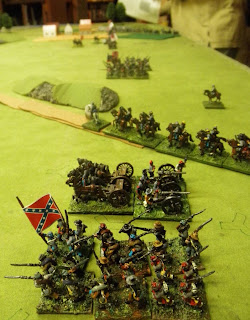 Must have been feeling nostalgic last night, because I pulled out an oldie-but-goody, "Fire and Fury", to me, the only rules for American Civil War. My ACW collection was one the first (and few) armies I ever finished, and they look great en masse. F&F does a great balance of looking the right size, but sacrificing playability. 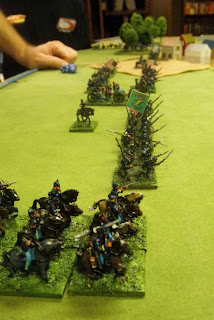 This scenario was Union push over a river. They held one town, and were going to cross and claim some rebel held territory. The Rebs got wind of the planned crossing a raced to meet them.
Now being a dy-rect descendent of those heroic partisans of the Missourahh known as Quantrill's Raiders, I was duty bound to fight on the Southern side. We got the jump on e those dirty blue-bellied invaders and got across the river before them, taking the fight to the Federals. 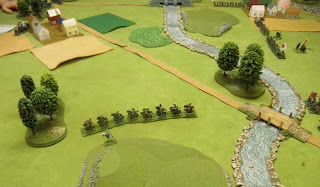 Southern cavalry heads deep into Union territory
My Reb Cavalry flew across one the bridges to hold the crossing point. Now, as many who have wargamed with me will tell you, if I had an Indian name, it would be "Horse Killer". If I'm your cavalry commander, you might as well right off those pretty ponies, cause they'll be dead soon. And sure enough the boys in blue counter charged and drove me back with heavy causalities, but I managed to hold the crossing point long enough to get the infantry across. 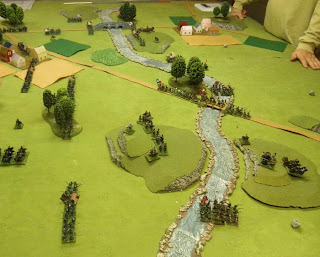 The Rebel crossing
One of the things I love about F&F, is the see-saw push and pull the battles give you, which to my opinion, tipified most real life ACW battles.
We smashed into the Union lines, got pushed back, regrouped smashed in again, they pulled back, etc.
In the end, the Union lines fell slowly back to regroup around their town. We weren't going to dig them out, "they was dug-in like a tick". So, a marginal Rebel victory, as we kept from our side of the river. And, a major victory for me. I still had horses at the end of the night, actually poised to do some damage to the Union supply lines. 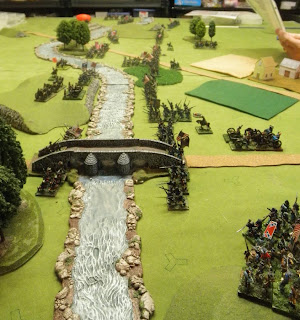 A fire-fight erupts at one of the two bridges. Neither side had the guts to cross.
Posted by BaronVonJ at 8:20 AM 6 comments:

Wow! Was it a year ago I blogged about the big 4-0?
Recently, I've been following a couple threads on being a Gamer Dad, both over at "I See Lead People" and Lead Addict.
This has had me in my time of reflection which always comes around B-Day time, thinking of my own Proud Gamer Dad moments, and my little spawn. The more I think about it, the more I see what little clones my children are.
The Girl was first, and she has grown up next to my painting table. She was the first to ask to paint her own miniatures and the first to realize how frustrating it can be. She has inherited both my need for perfection, not in all things, but in things creative. It's hard for both us of to continue if we don't paint it, draw it, or do it right the first time. Then, go back after months, tear it off the stand and remount or generally "fix" it. I often find half finished drawings in her trash can because she didn't "get it right". She has also inherited my strange eye color, artistic abilities, and the love of the quiet and balance. But, in everything else she is like her mother, along with her mother's looks and mannerisms.
Favorite Gamer Dad moment: Her character , Miss Adventure, used all her money to save her brother's PC from the Land of the Dead. And then constantly reminds him of it.

The Boy, on the other hand, is so much like me it's scary. I often find him sleeping with a copy of the Monster Manuel under his pillow, or staging an elaborate wargame on the floor of his room, with rules he made himself.
When it came time at school to do "Wax Museum", an assignment where the students research famous people, then become them in a sort of "Hall of Presidents" ala Disney, he chose Napoleon, when others kids did Johnny Appleseed and George Washington.
He is ruthless in games, both video and tabletop. Full of bravado, he is inside, a very sensitive kid, quick to be hurt. I dread the day his character dies, as I know he will, with the kind of "charge in, ask questions later" character he has.
Favorite Gamer Dad moment: Fighting in a 8 way skirmish, he had wasted most his troops in a futile battle with Lead Addict's middle boy. They agreed on a truce. Not five minutes later, he turned to player on his left a whispered, "Hey, how much to kill this guy?" nodding his head towards the kid he just made a truce with. He wasn't going to attack, but that didn't mean he couldn't get someone else to do it for him. Ahhh, my little Machiavelli. As Darth Vader would say, "Ruthless and Inventive."

Friday nights, we feast at the coffee table, and watch some SciFi or mindless blockbuster movie on TV. Then, dig out a boardgame and play as a family. No, not Monopoly, but Carcasone or Settlers of Catan. They say they'll never get tired of it, but I know they'll grow up soon enough and not have time for Gildrid and Miss Adventure. But, I know they will. I just hope they look back fondly on there own Gamer Moments fondly. 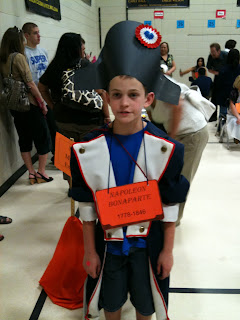 For a "I don't have anything planned but the boys are coming over" game, I always fall back on Ganesha Games product, especially "Mutants and Deathray Guns". I usually just throw out a scenario. In this case, find the drinkable water source. I have cards made up for all the figures, so we just randomly deal each player 5, and make sure one has the "Leader" skill. So, with that said:
Somewhere in the Null zone, at the scene of an ancient battle between Giants, a source of untainted water springs. Five desperate factions fight for control... 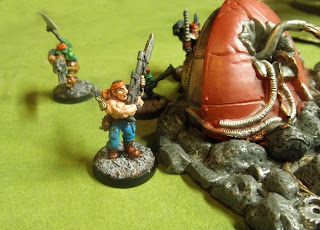 Rombo and other members of the gang take cover behind a destroyed Giant Robot. 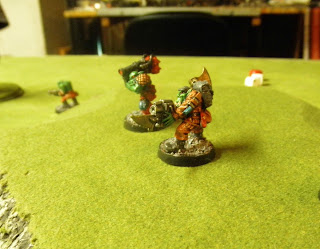 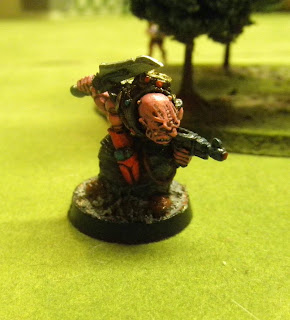 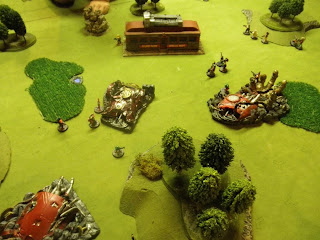 The battle rages.
In the end, it was called because of time. We could have finished quicker, but it was one of those nights where we spent alot of time BS-ing. The figures are mostly old GW stuff, repurposed for the dark future. I have more of a Kamandi / Gamma World / Thundarr take on the post apocolyptic theme. So the minis are painted in more of a comic style (bright colors) than a dark. dirty realistic vein.
The destroyed bots are old bases for Marvel action figures.
Posted by BaronVonJ at 9:06 AM No comments:

Hey everybody, just a quick note to mention we started a new adventure over at my OD&D (That's Old-School Dungeons and Dragons) blog:
http://walllandbeyond.blogspot.com/
I run these games with my gaming buddies from "back-in-the-day" and our kids. It's creative outlet and chance to dig out the sketchbook. 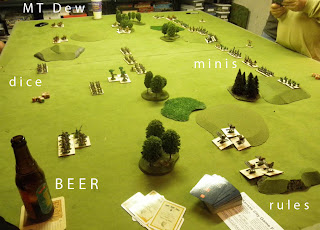 Ahh, the essentials for wargaming...
Last night was the 3rd or 4th playtest of Commands and Colors with minis and a fantasy army bent. Like a lot of people, we found Battle Lore too limiting. Simply using the existing C&C Epic classifications and a few house rules worked great. It also helps that the Demonworld minis are great. Wish they were still around.
The elves were able to keep the greenskins at a distance for most of the game with a few probes here and there. The allied centaurs crushed their opponents on the left flank, but paid dearly for it. Elf victory! 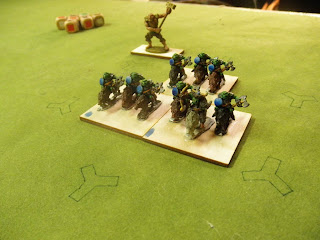 Orc wolfriders in their "hex"
Posted by BaronVonJ at 8:28 AM No comments: 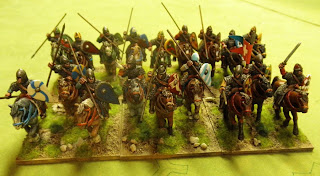 Here's a fresh batch of Crusader Normans (or I guess they could work as Crusader crusaders, too). These fellas are on the chunky side, but a joy to paint. 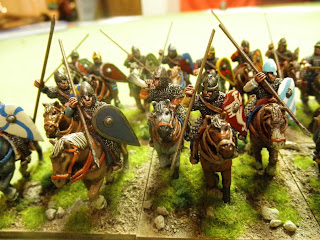 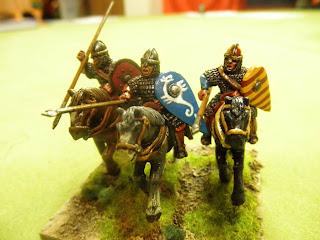 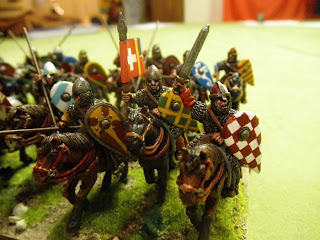 On another note, I've been doing a lot of rules reading while sitting around waiting for soccer or volleyball practice to get over. I'm about halfway through the 212 pages that is Fields of Glory Renaissance. The book itself is beautiful to behold. Hardback, done by Osprey, so it has ll kinds of great art and miniatures with superb graphics. The rules are well laid out with color coded bars done the page to highlight each section and plenty of examples.
That being said, I don't think this will be my rules of choice. I know there are lot of FoG fans out there. Its very Armati to me.
Things I liked: whole base removal ( I hates pulling single figs). Things I didn't: they tried to cover too much. I know this is a core book, with lots of expansions to spend your money on. You get 2 sample armies in the book (and not from the same period). Six pages is way too long for a "Quick" reference sheet.
I might playtest them, though.
On the other end of the spectrum, I'm reading HAVOC a set of rules for medieval and fantasy battles. Compared to FoG Renaissance's layout and strict structure, HAVOC has almost a zen-like read to it. No charts, no illustrations on how to organize your units or how to wheel or anything like what most rule sets have. That's because you don't need them, dude. That's how the Man keeps you down. That's what the "establishment" wants, man. Sorry, I digress.
I wil give a fuller report when I finish them.
Tonight: Commands and Colors Fantasy. No, not Battle Lore.
Posted by BaronVonJ at 7:52 AM 3 comments: