The Campaign for the Kingdom 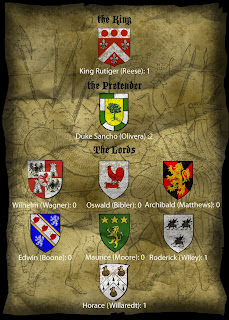 Thursday was the first game of our mapless medieval campaign.
The kingdom is in turmoil. King Ruprick the Mad has died under mysterious circumstances. His son Rutiger has assumed the throne, but his uncle Oswald has also claim.
The forces have met on the field of battle. All seemed lost for Prince Rutiger. His flanks were collapsing. Suddenly, Sancho, the Prince's trusted commander, broke Oswald's center, and scattered his forces.
Oswald went into exile, swearing revenge. Many felt Sancho have proven his worth, and thought him a better leader than now King Rutiger. The stage is set for the next battle.
Posted by BaronVonJ at 8:22 AM No comments: 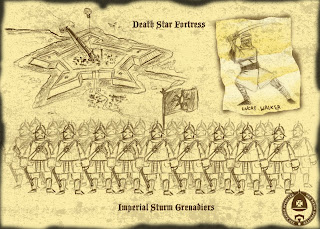 Presented is sketch from Lord Ogden Cotswald's personal collection. It depicts not only the now imfamous Death Star Fortress in action, but also Imperial Sturm Grenadiers and a rare drawing of a young Lucas Walker still in the native dress of his desert home.
Posted by BaronVonJ at 2:03 PM No comments: 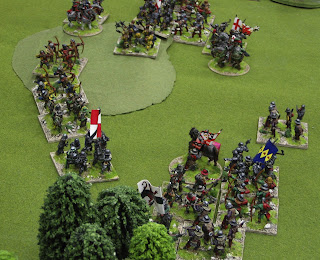 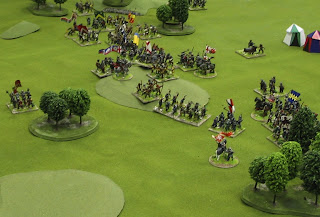 Pictures from RECRUITS!
Posted by BaronVonJ at 1:46 PM No comments: