Yes, another period. I'm drowning in Renaissance miniatures, early Italian Wars to these fellas from the French Wars of Religion. This is a pike and shot unit of 24 with equal parts of both, from OGs Wars of Religion line. 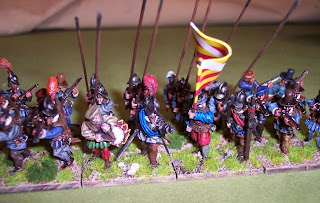 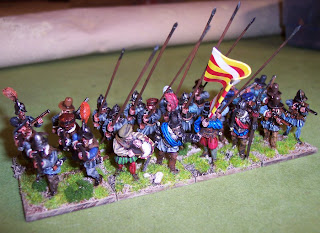 Posted by BaronVonJ at 7:56 AM No comments:

The folk of Helmgard are a pious, hard working people. And by pious, I mean puritanical zealots who see witches around every corner, and outsiders as heretics in need of a good burning. It is their mission to cleanse the world of the non-believer. Fortunately for the rest of the world, Helmgarders, like most Unkerlantians, seldom leave the confines of their own border. Helmgard’s neighbors tend to tolerate them, as long as their missionaries keep to a minimum. Occasionally, however, the surrounding provinces will gang up to teach Helmgard a lesson. Helmgarders take these beatings in stride, as it only adds more martyrs to the cause.
The Arch Bishop Bloefeld runs his lands like a well oiled machine. The towns of Volgen and Herzig are operate with the precision of a clock, only stopping for a random witch burning now and then.
Helmgard soldiers fight with a righteous fury seldom seen on the battlefields of today 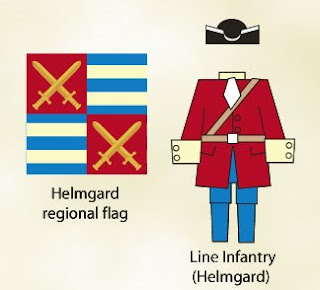 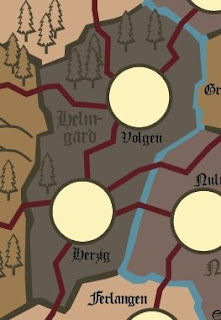 Posted by BaronVonJ at 2:22 PM No comments: 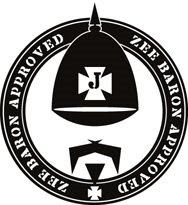 As I approach the 6 month mark of Zee Baron's Blog, I thought I'd give a special shout out to all of you who "Follow" my misadventures. I'm taking a break for Memorial Day weekend, but will be back next week posting more pictures, adding more flavor to the kingdom of Unkerlant, and starting a war!
I'm simultaneously painting troops to add to the growing armies of Unkerlant, my VSF horde, and Retro SciFi. I'll be running campaigns for all the afore mentioned and building terrain. In short, pray for me.....
Posted by BaronVonJ at 7:49 AM No comments: 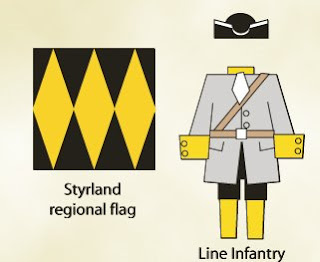 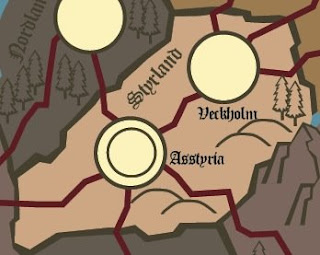 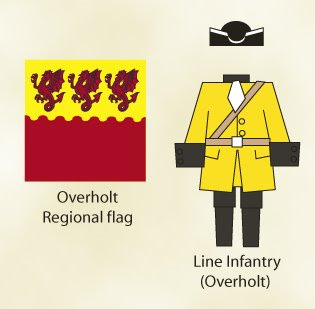 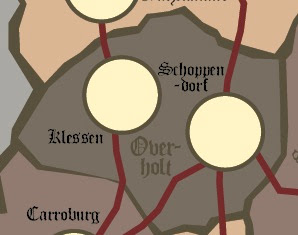 Posted by BaronVonJ at 2:20 PM No comments: 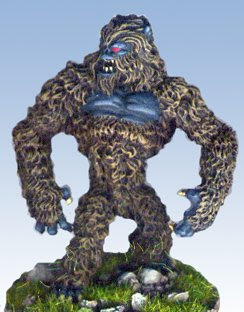 Don't know where this fig came from, but I dug him out and painted him. He'll be great for multiple uses: Super Heroes, Pulp Sci Fi, and Song of Blades and Heroes.
Posted by BaronVonJ at 8:42 AM 2 comments:

I added fellow General, Steve's blog to the links.
Posted by BaronVonJ at 2:44 PM 1 comment:

Deep in the woods of the east lies Reichwald. Though one of Unkerlannt’s largest provinces geographically, it has one of the smallest populations, mostly trappers and huntsman. Reichwald is a dark, forbidding place, where an unwary outsiders can easily be lost to its vastness. The hearty people who make it their home are very protective of both their land and their ways. Reichwalders make excellent light troops, guides and scouts, masters of ambushes and traps.
Two tiny villages make up the only places of mention in Reichwald, Zhufbar and Pfugzig. The names may seem strange, but Reichwalders speak an odd dialect of of Unkerlanter, mostly foreign outside the province. Zhufbar is a merely a crossroads on the way between Middelhiem and Franistover. Furs and lumber are its main attraction along with a briny liquor supposedly made from pine needles and sap.
Pfugzig is really just a coaching station but claims to be the original capital of Unkar’s kingdom. Scholars find this highly unlikely, but locals still cling to the tradition and stage elaborate festivals around their mythical founding.
Huntsman General, Voltan Grenzhoffer holds sway over this forested land. He is a loud, boisterous man, always ready for a good brawl. 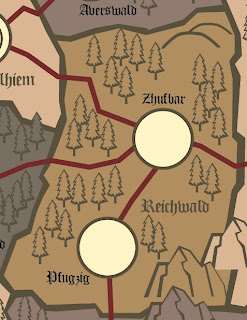 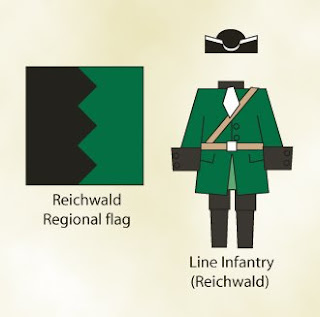 Posted by BaronVonJ at 10:19 AM No comments:

Battle of Grenzburg, a M and R playtest

Last night, as is the Basement General’s custom on a Thursday, we had a battle. This one was to playtest “Might & Reason”. I’ve owned the rules for awhile, and am a big fan of “Grande Armee”, but never played M&R. So, with the Second War of Unkerlantian Succession looming, it seemed like a good time to try them out.
The Setting
With the beloved King Karl Franz III, deathly ill, the tiny kingdom of Unkerlant was already on edge when news arrived that Borogravian troops were massing at the southern border. The small village of Grenzburg was the obvious target. Grenzburg was no longer legally part of Unkerlant, being annexed in the last war a generation ago, but most Unkerlanters still considered it part of the realm.
With the monarch on his deathbed, the defense of the kingdom’s honor fell to his sister, the Arch-Duchess Bruhilde of Volborg. Orders to march to the defense of Grenzburg quickly went out, though not from the duchess herself, but from her consort Augustus (a man despised as much as Brunhilde is loved). Troops quickly moved south and in the early morning a few days later, the battle began.
Forces were remarkably equal. Both sides had 5 regiments of dragoons and 3 of cuirassiers, 6 regiments of regular infantry and 4 of grenadiers and guards, including on the Volborg side, the Duchess’s Own Elite Grenadier Guards. Four batteries of artillery.
The armies arrayed in a mirror of each other. Dragoons faced dragoons, the guard the guard and so on down the line. The commanders too were both men of equal ability, good by the standards of Unkerlant, poor by the rest of the world.
Commanding the forces of the Grand Duchy of Volborg would be the Duchess Consort himself, Augustus. The Borogravians were led by the exiled Prince Ruprect.
Volborg began the battle, marching forward boldly, full of love for their duchess and pride in their arms. Volborg would hold the initiative for most of the battle, but was plagued by indecisiveness. On the far left, General Baron Von Bombast sent his cuirassiers into a narrow pass between two woods, in hope of forcing his opposite into fighting him on a narrower front. On the right, the mad General Biblenburg sent his massed dragoons up the hill to his front. The center left and right marched steadily forward. General Reddentropp seemed unsure how to deploy the grenadiers in the center left, and spent a lot of the battle milling about.
Across the battlefield the whole Borogravian line trundled forth, except for General Mathias on the right. It seems his gout had acted up again, and he was having trouble mounting his horse. Thus, the Borogravian heavy cavalry sat.
When the cuirassiers finally moved, they were forced to meet their rivals in between the woods, just like Von Bombast planned. The two met, and grueling fight of attrition began. The same was true on the opposite end of the line. Volborgian dragoons charged and charged again. After three attacks and counter attacks, the Borogravians under General Moorstadt finally broke. One regiment managed to break through the other side, later to threaten the Volborgian rear and baggage.
Meanwhile, Borogravian infantry under General Reezburk captured Grenzburg.
This was an acceptable setback to the Volborgians as they thought they would soon be driving them out.
In the middle, General Reddentropp’s indecision was about to cost the Volborgian the left flank. The bloody cavalry battle between the woods was on and both sides were locked in combat. While the Volborgian grenadiers sat on the hill and watched, their opposite number moved in behind the pinned cuirassiers. Now stuck between the heavies in front and the grenadiers behind, they were destroyed. Their whole left flank was open.
The center had become a large infantry slugfest with no clear winner emerging.
This was the scene when night fell. Both sides were equally bloddied, but Borogravia held the town. Retaking it proved too much for Augustus. Grenzburg would remain a foreign possession.
Aftermath
I think everybody thought the rules worked great, except for one instance where a lone cav unit was holding up several infantry units, with them unable to engage the cav. All attempts at whittling them down with musketry failed.
The forces were completely balanced and so were the losses.
I created some printed blanks to playtest and this inspired me to get back to painting. 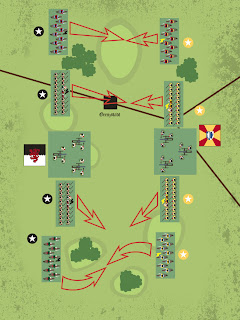 Posted by BaronVonJ at 3:33 PM No comments: 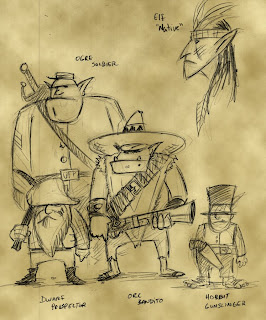 Inspired by a Victoria Lamb miniature, I decided a fantasy twist to the Old West was in order.
Dwarves would miners, prospectors and mountain men. Elves the Natives trying to protect their lands. I think it could work.
Posted by BaronVonJ at 10:24 AM 4 comments:

Scratch built and cobbled together, ready to enter battle! 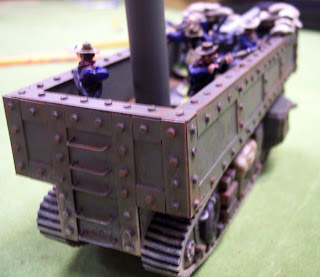 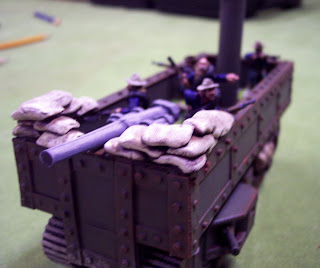 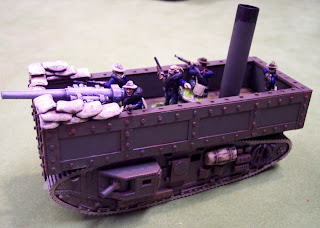