The ancient Templar Shrine has been targeted by Imperial Forces. They have sent the Dark Templar Oshiro with a Imperial Tac squad and a band of Ornk mercenaries to destroy it.
Standing in their way is a small group of locals led by Templar Wilja Stind (my Jedi name according to the internet). 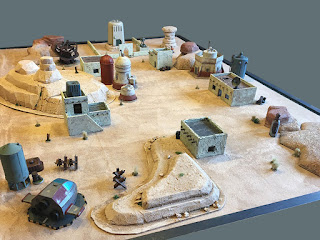 A sleepy settlement on Felines V. 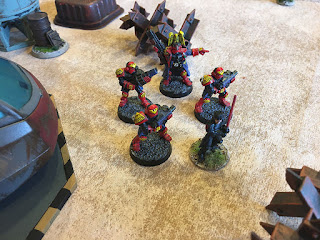 Lord Oshiro and the forces of the Empire 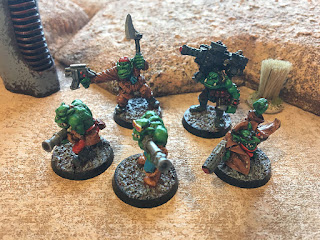 Skanky Muldoon and his greenskin mercenaries 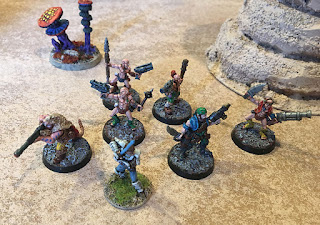 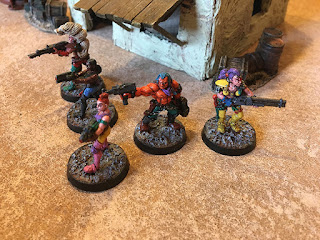 Orange Julius brings out his Girls to do battle. 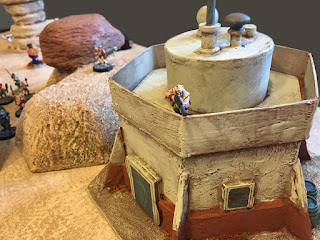 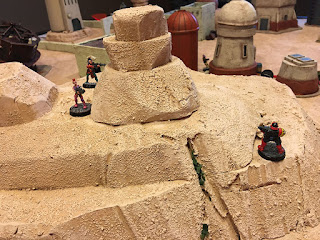 As usual, the much muscle bound, armed to the teeth Orange Julius went down in a hail of gunfire first turn. Oshiro, confident in his dark abilities walked down the middle of the street, defying snipers and armed locals. 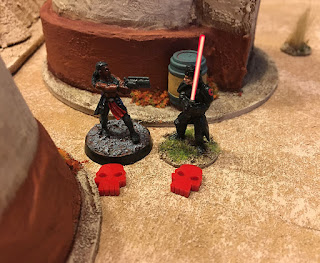 He attacks one of the Bettys. Somehow she defies the odds and puts a wound on him. A shot from the sniper, puts him down for good. So much for the Blessings of the Emperor.

(We usually keep the markers on the character sheets to avoid clutter, but we kept them out for this game for pics) 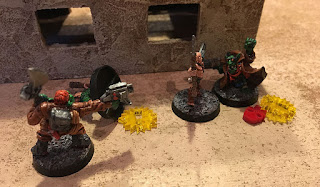 The Ornks try a flank but run into a horde of Grunts. It turn into a bloodbath for both. 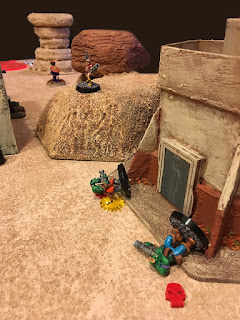 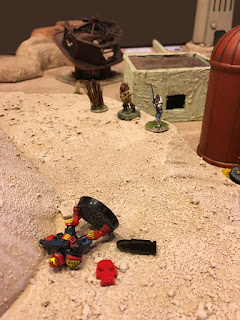 ...while Wilja Stind reflects a shot back t a Trooper, dropping him. 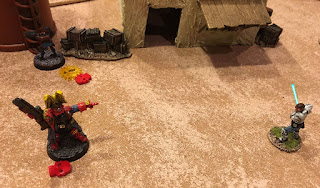 Only the Captain remains to fulfill the mission, but he too is dropped by a deflected shot.
Great game with lots of twisted and turns. Shades, one of the mercenaries, almost made it to the shrine, but detoured by his "Bloodthirsty" trait. I had too much confidence in my Dark templar abilities. One of my opponents, "Other Jay", ran his Templar better to win the day.
Posted by BaronVonJ at 10:07 AM 4 comments: 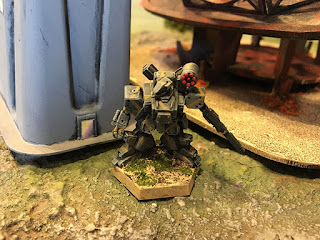 Poor Hawk, we hardly knew you...
I had someone online ask me if you could use the upcoming Fistful of Lead: Galactic Heroes with anime type giant robots/battlesuits. The answer: "Why not?!"
To test the idea, I made up 3 opposing teams using the Crew creation rules. I fudged just a bit to give the battle-suits armament to match the minis. I dug out my much unused DP9 Heavy Gear minis and through out some terrain.
The scenario: I recently bombed Rebel listening post contained highly classified Alliance intel. The comms tower was able to download it to 3 large severs before the dish was blown. The rebels want to download it, the Alliance destroy them, and a poor group of mercenaries is caught in the middle. 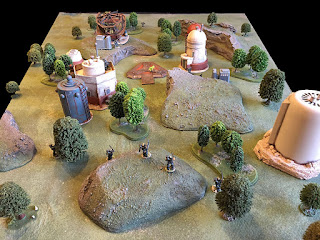 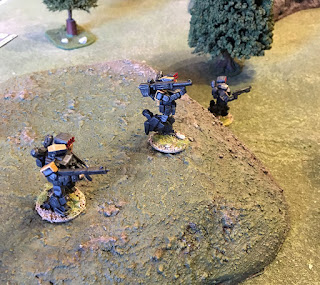 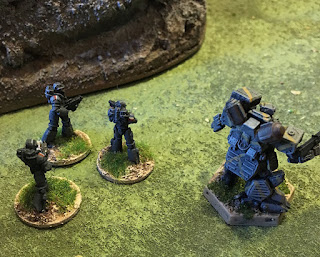 Mercenaries in the middle. "They don't pay me enough for this...." 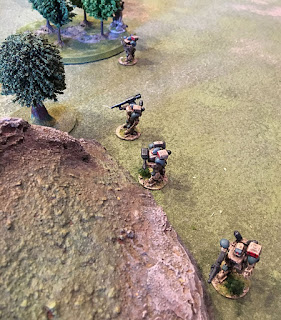 The game started with a bang. A Rebel sniper, callsign "Deadeye", lived up to his name and dropped a mercenary, "Hawk", guarding a download point. The two Alliance troopers showed up to investigate and were hit with a one shot rocket pod barrage. 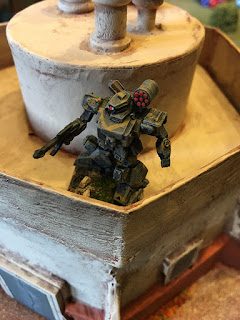 The Mercenaries spring to action! 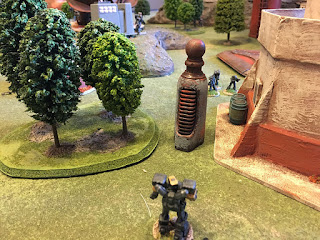 Infantry caught in the open! 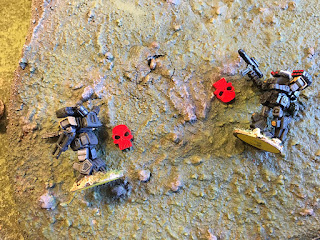 The Rebels are hit by a rocket barrage. 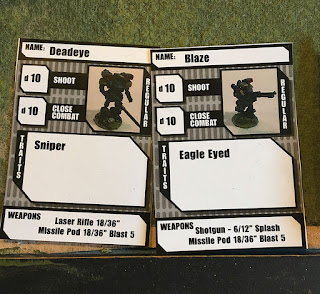 Here's an example of the record cards. These are Regulars, so each gets a 1 trait. Sniper let's Deadeye preroll one shot a turn, Eagle-eyed let's Blaze improve the range of his oversized shotgun. 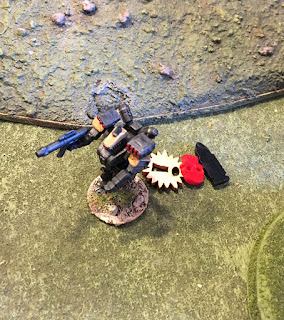 The Rebel leader, callsign "Shark", has the Fistful trifecta: Shock, Wound and Out of Ammo. 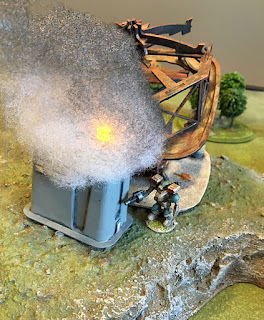 Scratch one intel tower.
Victory went to the Rebels. They were able to reach two towers and download the intel before they were blown up.
The game went really smoothly. Each trooper had a personality thanks to the traits assigned, and more importantly it had that anime feel. The squads of non-battlesuit infantry I just treated as a single miniature. Each "wound" removed a miniature. They were treated as "Small", so harder to hit, and to show their reduced firepower against the battle-suits, I gave them a d8.
Posted by BaronVonJ at 10:17 AM 1 comment: