It's less than a month from our local KC area convention RECRUITS. I'll have a vendor table this time selling Fistful of Lead: Reloaded and the new Fistful of Lead: Horse & Musket.
I'll also be running 3 games Friday through Saturday night. I host a Western game, Chris "Cluck Amok" Cluckey will be running the Horse and Musket rules with his stunning 54mm soldiers and terrain, while Ken "Lead Addict" Boone will run a sneak peak version of Wasteland Warriors with equally cool models and terrain, which I hope to coincide with the Kickstarter launch of WW.
If you are anywhere in the Midwest, I strongly urge you to make this convention. It's run by great people specifically geared for getting a new generation of Recruits into the hobby. Plus, it's dirt cheap!
$5 for the whole weekend, and free to students and veterans. And believe me, cheap entrance fee doesn't equal cheap looking games. There are a host of great games and Gamemasters. And you can say "hi" to me!
Check it out here.
Posted by BaronVonJ at 12:49 PM 2 comments:

GASLIGHT: The Staff of Osiris

When a newly discovered pyramid yields a strange new artifact, it can change the balance of power. It's up to legendary explorer Percival Armstrong and a band of stalwart British soldiers to get the artifact to the approaching Royal Navy skiffs before the Hun attacks. 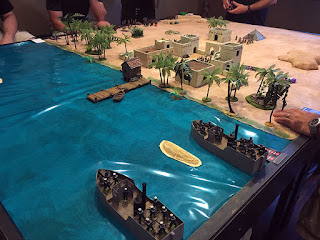 The Navy chugs up the Nile 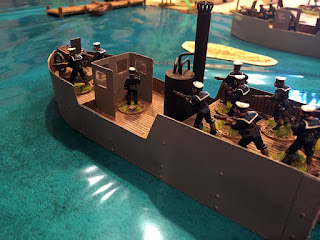 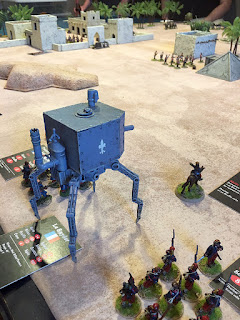 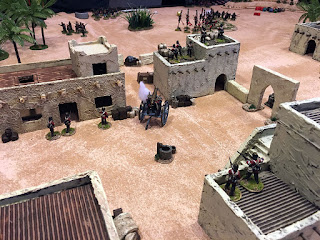 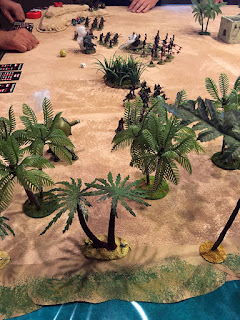 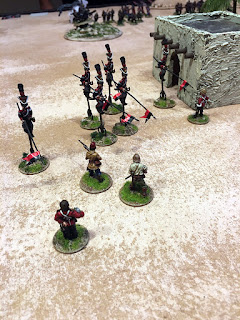 The Unicycle Uhlans wipe out most of a British unit and charge through to face Sir Percival and faithful man servant Mpopo. 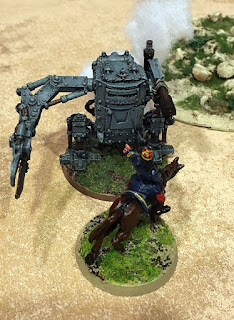 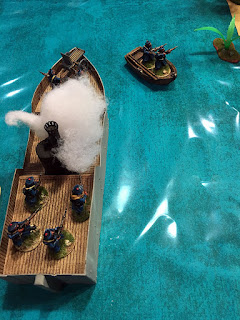 Some tricky French Marines take a rowboat from the dock to meet the awaiting artifact. 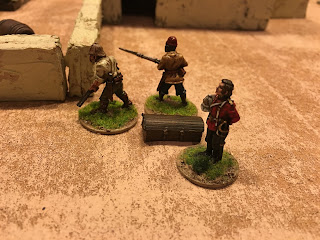 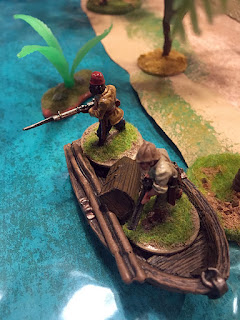 And they escape. It was a great game full of triumph and hilarious mistakes. Both the Rokkitruppen and the Uhlans shook off their history of terrible performance and almost turned the tide. If not for the direct intervention of the heroic Col. Framauge, things might have gone the other way. He was awarded the Legion of Honor Posthumously.
Posted by BaronVonJ at 10:53 AM 9 comments:

A day at the games. 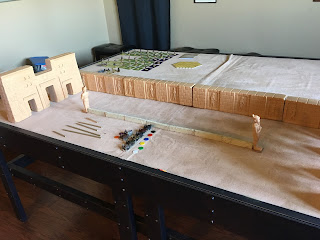 I recently picked up the latest by Ganesha Games, Faustus Furius, a chariot racing game using the the Song of... mechanics. I'm a sucker for Gladiator and Chariot games, and with the new, probably terrible, reboot of Ben Hur coming out, I was inspired to pick up yet another rules set. 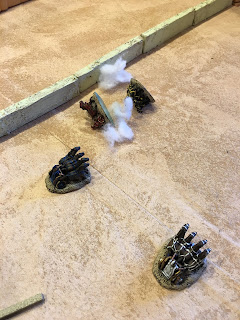 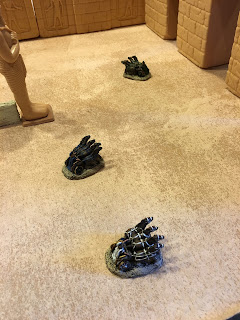 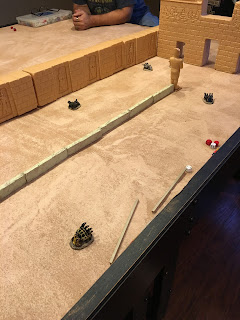 I dug out the makings of a hippodrome from my $10 Playmobil-ripoff Egyptian set ( hey, they had arenas there during the Roman Empire) and some chariots.
It was great. The mechanics force you to make risks if you want to win, and plenty of dirty tricks. Our Green Chariot, driven by Don Magicus Juan, was in the lead for most of the race, then tried to get dirty and the end and it cost him the race.
After the race, we took the winnings to fight a Gladiator match. For time, we just did a bunch of 6 player duels, where given time, I would have set up some 1 v 1 matches. 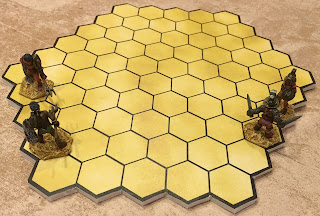 My arena is on loan at the moment, so a quicky arena made do.
After all the gladiator rules I've tried, I always go back to "Death or Freedom". They make for some fun games without taking to long. There are some nice rules out there, but this is one I always come back to.
Posted by BaronVonJ at 1:41 PM 2 comments: 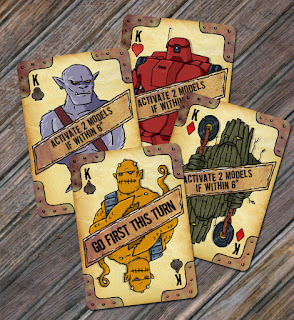 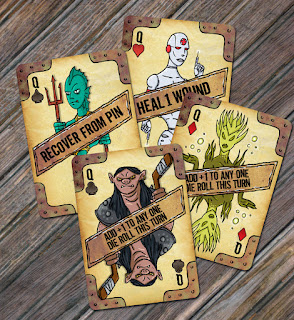 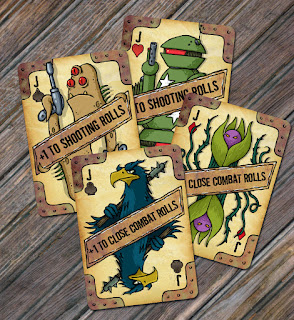 Time to start on the card deck for Wasteland Warriors. As always, you don't need this deck to play, but why wouldn't you get it...
These represent 4 of the 5 "races" you can play in Wasteland Warriors: Robots, Mutants, Mutated Animals and Mutated Plants. The other one being Humans.
Each type as advantages and disadvantages. Mutants, of course, start out with mutations like tentacles, wings or mind blast, but have trouble figuring out tech of the Ancients. Humans, on the other hand (or claw), have no mutations, but don't have trouble figuring out artifacts (in fact, they get a bonus) and even start the game with one piece of advanced tech.
Posted by BaronVonJ at 10:57 AM 4 comments: 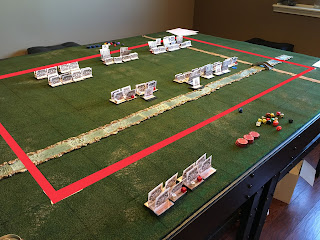 To the Strongest by Simon Miller is one of my favorite rule sets for Ancients. We've used it for Fantasy battles and Renaissance. When I found out he was writing a new version for the English Civil War I was very interested. Combine one of my favorite rule sets with one of my favorite periods? Hell, yes!
Simon was nice enough to give us a draft version and a sample Battle of Montgomery to try. Luckily, I had just enough paper armies to try it out (the humidity of Missouri in August was not kind to them).
If you are familiar with TtS then you'll pick these rules up quickly. We got quite a few things wrong at first, then cleared them up later. Simon answered questions right away this morning.
Parliamentarian forces already had their backs to the wall (or river in this case), and out numbered. That's the thing about historical battles, they are rarely even fights.
The Boys fighting the King got trounced, big time. That's not to say it wasn't fun. Looking forward to another scenario. 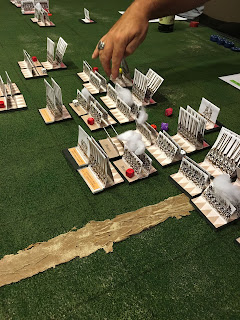 Using smoke for disorder and tracking hits & ammo with dice.
What you don't have lead armies for this period? Actually, I have them in about every scale, unpainted. It's weird. I've been looking for the right rule set to paint anything up. Maybe now I can get started. But 10mm or 6mm...?
Posted by BaronVonJ at 9:18 AM 1 comment: 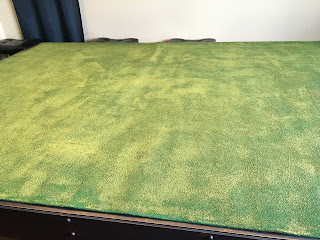 I got a great tip from a fellow wargamer (can't find link so speak up if it was you) about these Eco-Rugs. $20 for a 8x6 outdoor carpet piece from Lowes. These are way different from grandma's cheapo outdoor carpet. It's not so "green you'll never find in nature" and doesn't have the flakey weave to it. It's made from recycled plastic.
the rug is nice and heavy so it lays flat.
It's still an awful color for realistic grass, and a little part of me dies whenever I see nicely painted armies sitting on putting a green. So, I painted it.
I grabbed a cheap gallon of my favorite green ( great to have extra for making hills, etc) and rolled it on. No need to be precise. Let those happy mistakes take over. It will soak in. It was more important to knock back the color than completely cover. 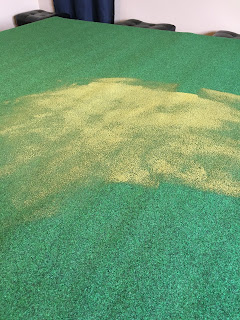 Next step it taking a sponge and adding bits of brown. This mat is for To the Strongest. It's getting a 6' grid on it. Great part is, I can flip in over and make a different grid, or none on the back. 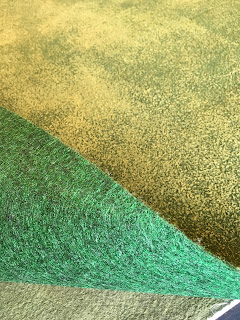 This project cost me about 2 hours of time and under $40. Considering the new printed mats I see everywhere would cost me close $90 just for half my 8x6' table, I call it a bargain.
Update: Here's the original article: Anton's Wargaming
Posted by BaronVonJ at 8:08 AM 6 comments: 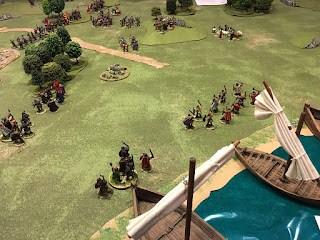 Last week seemed like such a close game, we decided to keep it set up and finish, Miraculously, the dragons (cats) that live in or castle let them survive.
When we last left our battle, the Normans were getting the worst of it. Even though they out numbered the Viking invaders, a rash of failed activations and poor dice rolling had kept them on their side of the board, and beaten back at every flank. One lone cavalry unit had managed to flank the the Vikings on their left, and were in threatening to burn one of the boats. 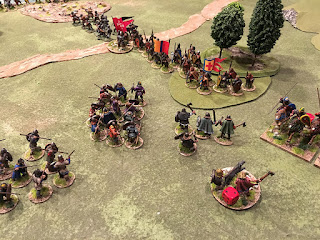 Until the Berserkers attacked. They were in wild charge range of the Norman cavalry. The Normans failed their own counter charge roll and took the charge at a stand still. It was a slaughter for both sides. The Berserkers went to Valhalla but took all the horsemen with them.
The Vikings pressed forward across the line.
Then, the brilliant Norman commander, who had failed rolling all last game, and was on course to repeat, came up with a plan.
He gave all his troops to his subordinates.
Sure enough, they performed brilliantly. The best unit on the table, a Norman Mounted Men-at-Arms unit cut a swath through the vikings like butter. Crossbowmen, filled the sky with arrows. It all looked like the tide had turned. And it had. 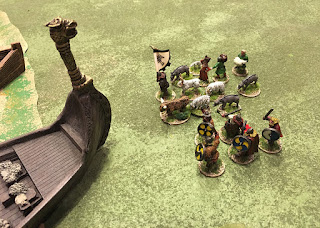 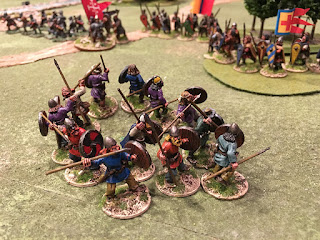 The tide was going out, and the Vikings started loading up the ships. One of units stayed behind, formed shieldwall and single-handedly held up the Normans while their brothers escaped. The Valkyries delivered them personally to Odin's side.
Posted by BaronVonJ at 9:14 AM 1 comment: