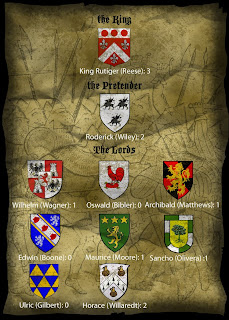 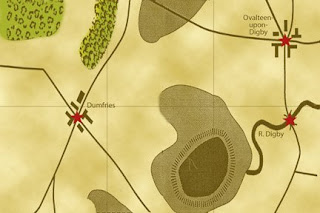 On a cold and rainy day, two armies collided at Old Digby Hill. The new king Rutiger was only able to muster is household troops along with Sir Maurice's troops and gaggle of mercenaries. Facing him was his formerly loyal commander, Lord Roderick. Roderick fared no better calling up troops on that miserable day. Only Sir Archibald (who had been on the losing side constantly since the campaign started) and a mercenary from the north, Ulric arrayed for battle.
Rutiger's army held the hill, with the river Digby on his right and the town of Dumfries anchoring his left. Roderick would be faced with an uphill fight he couldn't get his enemy to charge down after him. So, he decided to task the mercenary Ulric to take the hill.
From the start Ulric was hesitant to move. Though he urged them on from the front, the northern troops stayed rooted the spot. Eventually they would move up, only to be showered with arrows and driven from the field.
The rest of the battle was a bloody mess. Most troops on both sides broke and ran at the slightest damage or were killed to a man in one round.
In the end, though it initially looked close, Roderick's army broke first. He was hunted down later and executed. His son, Roderick the younger swore revenge. Sir Archibald was rewarded or his lackluster performance by the king.
Thanks to all who made it out. I love these rules....
Posted by BaronVonJ at 7:49 AM No comments: 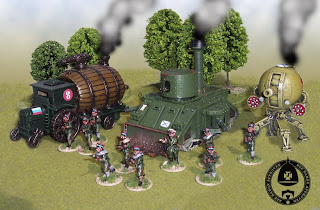 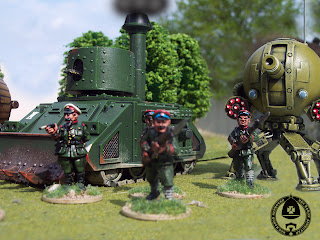 Presented is the newest chromeograph from the Alaskan Front. Colonel Ivan Kersplatski of the Czar's armed forces, is cooly enjoying a cigarette as his troops advance. An older model MkII Flame wagon, is escorted by latest "Deathball" armored walker and T-73 "Gulay-Gorod" Mobile Fortress. We wish him the utmost success against the mechanical monstrosities of Professor Nightshade.
Posted by BaronVonJ at 8:38 AM 1 comment: 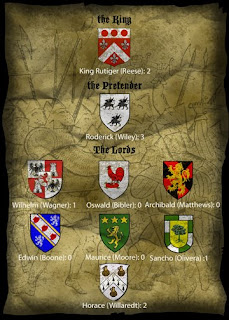 Campaign for the Kingdom Pt. II 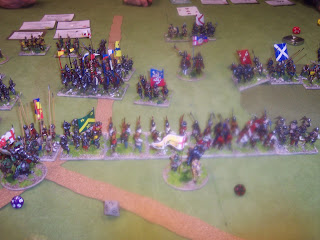 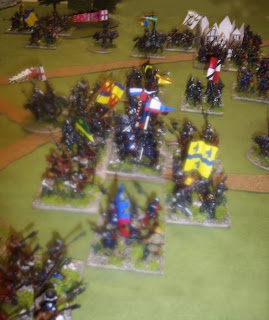 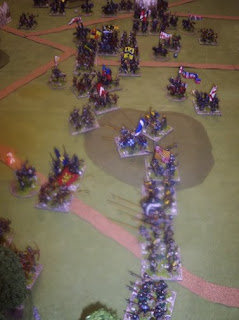 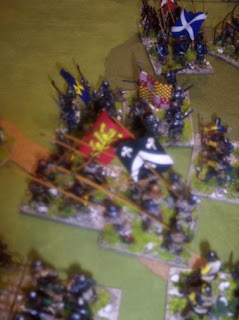 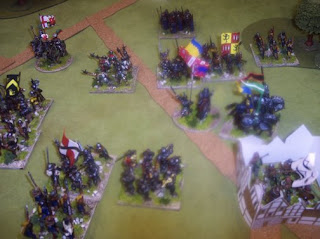 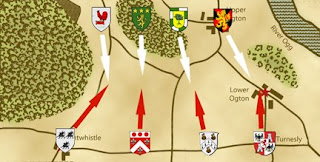 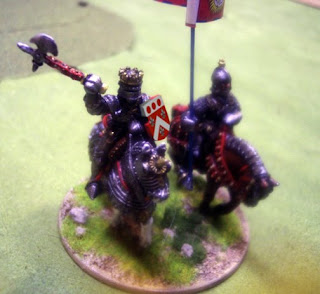 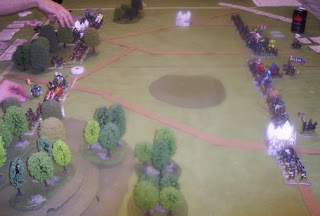 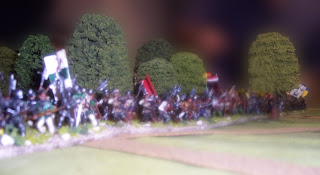 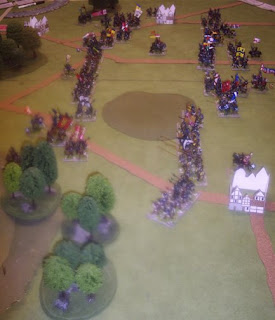 Last night the Basement Generals gathered again to decide the fate of the Kingdom. Prince Rutiger squared off against his one time lieutenant Sancho. As defender Rutiger chose the ground. The vital towns of Entwhistle and Lower Ogton were on his side of the field. Sancho's troops would be forced to march through some rugged wooded areas to fight.
Sancho's forces moved first, and decided to move cautiously, but his commanders on the wings were unable to control their troops which charged out ahead of the center.
Rutiger's side fared better a steadily moved up, except for the Prince's own host which decided to wait.
Sir Horace, under Rutiger sent is large cavalry force ahead in the middle to break up Sancho's advance, but several troops fell victim to Sancho's archers.
Sir Archibald on Sancho's left wing was able to capture the town of lower Ogton before Sir Wilhelm could reach it. His pikemen would hold it until the end of the battle.
When the two sides finally clashed in the middle the blood letting began. Rutiger, in the center, was rapidly losing men. His household troops were being cut down while his Irish and Burgundian mercenaries retreated. Luckily, Horace's cavalry got into the fray and cut down quite a few troops of the enemy. Meanwhile, Roderick on Rutiger's left flank, made short work of Oswald the Usurper troops. It was all over.
Both sides put up a good fight, but Sancho's troop had enough. A general retreat was called. Sancho tried to rally the men but was captured and soon beheaded. Roderick was rewarded with an earldom for his battlefield work. But in that lied his undoing. Soon Lord Roderick would be gathering his own troops to claim the throne.

Thanks to everyone who braved the weather to battle. Beer has made some of the details foggy, And fingerprints on the camera lens made pictures foggy.
Posted by BaronVonJ at 11:28 AM No comments: