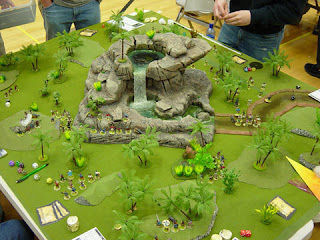 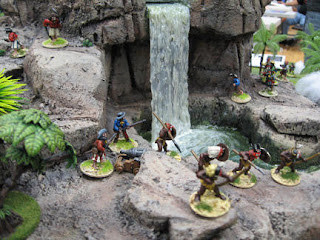 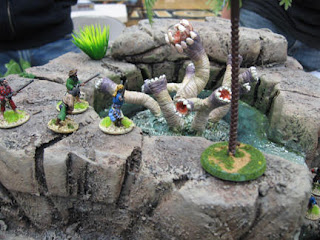 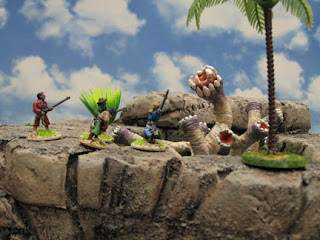 A few pictures from the battle of Isla de la Morte.
Posted by BaronVonJ at 8:07 AM No comments:

Around the World in 80 Days

Zee Baron has entered the fray over at "Yours in a White Wine Sauce"
http://pauljamesog.blogspot.com/
Posted by BaronVonJ at 7:53 AM No comments:

Pt. II: The Medieval Period
Like most of Europe around it, Unkerlant embraced the feudal system. Unkar had ruled a single kingdom, but his descendants parted out the lands to various family members, favorites and and the newly emerging knightly clases. The first four lands to be dispensed were to Unkar's great grandson's, Borog, Volbor, Franz and Zlobo. These became the duchies of Borogravia, Volborg, Franistover and Zlobenia.
The brother's fought incessantly. They fought over everything from territory to who had a better onion crop. Unkerlant's soil was already unforgiving, the poor peasants lives were made even worse by the constant battles.
Finally, a solution arrived in the form of Bishop Arnulf. The feuding parties would take up the Cross, and go on Crusade.
The brothers returned, their relationship made richer by shared hardship. One brother, however, did not return. Borog was ambushed on the road back. Rumors abounded that he wasn't done in by Saracens, but by his own brothers. The loss of one of the royal line so far from home only served to confirm the suspicion in most Unkerlanters minds that the outside world was treacherous place that should be avoided.
There would be no more crusading. In fact, besides the formible terrain that kept Unkerlant so isolated, the kingdom spent most of the Middle Ages content to war with itself, only uniting on those occasions when the Turks stumbled into their realm.
Posted by BaronVonJ at 2:28 PM No comments: