Not too long ago in a basement not so far away...

​May 7th, in honor of May the Fourth, we hosted a GALACTIC sized Star Wars game. I’ve done games that were linked, where the outcome of one is directly linked to the next game in the series. But I’ve always wanted to a set of games that were linked but also simultaneous and interconnected. Three separate games, going on at the same time, but each game has an effect on the others.

Luckily, I’ve got a large enough gaming space at my house to host my mad idea.

Imperial base Omicron on the planet Covid Prime has been a thorn in the side of the Rebellion. Most of the planet has been taken for the Rebel cause, but Omicron has been able to hold off several assaults due to the forcefield protecting it. A massive Rebel army has assembled for one final attack, but only if the rest of the mission goes as planned. 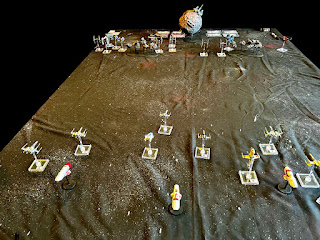 An asteroid base in orbit above Covid Prime is providing the force field to Omicron below. The generators must be shut down before the final attack can begin. A Rebel assault team has landed and is tasked with shutting down the forcefield. They are dangerously outnumbered by Imperial troops, but luckily, help is on the way. 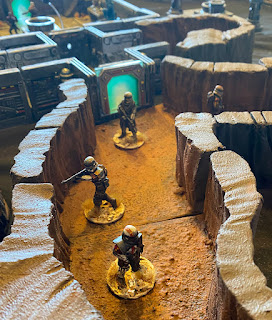 Rapidly approaching the asteroid is a group of assault ships carrying Rebel reinforcements. They are protected by fighters and escorts. The Rebels must get through if the assault team on the asteroid has any hope of success. The Empire has an ad hoc squadron to try and stop them. 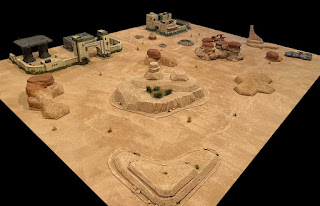 What this broke down to:

A 6 person Starfighters! game that was an assault on an orbital generator asteroid providing a force field to the base on the planet below.

A 6 person Galactic Heroes game that was the actual attack inside the orbiting field generator in the corridors of the base.

An 8 person Bigger Battle that was the assault on the Imperial planetary base.

Set up and briefing

Each team on each table was giving their objectives along with unit or character cards for their command along with any special rules that applied. All teams were informed they couldn’t communicate with other tables except through the referees. The referees decided if the transmissions got through or how long based on battlefield conditions. This allowed for some role playing. The teams were also informed there were 3 reinforcement tokens available. These would provide additional troops but are finite. And since communications were limited, there was a possibility one team could use them all up when another table desperately needed one.

Rebel squadrons: The main objective was to get the assault ships carrying a squad of troops to asteroid base. There are 3 assault ships to start with. Additional ships can be brought on with the use of one of the three reinforcement tokens. If a Joker was used (see notes on Fistful of Lead later in the article), the Rebels could move the asteroids on the table potentially causing problems for the Imperial fighters.

Rebels had the option to peel off ships to make strafing runs on the battlefield below.

Imperial squadrons: The main objective for the Empire is to protect the asteroid base from the incoming assault ships. Like the Rebels, they could elect to move ships off the table to strafe the Rebels on the planet below. If they used a Joker to activate, they could fire the base’s Ion cannon at the Rebel ships causing almost certain destruction to any ship hit. 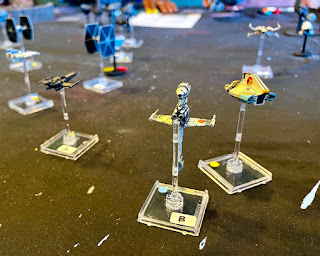 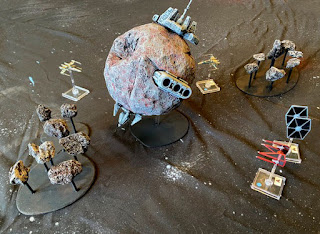 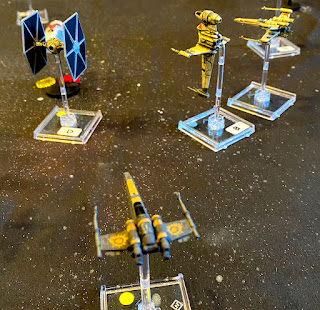 Rebel Assault Teams: Two teams have successfully infiltrated the base, and they are outnumbered. They must shut down the force field generated located at the center of the base. The Rebels had their choice of 5 start points after seeing where the Imperials set up.

A Joker in this case allowed the Rebels to collapse a wall (from the raging battle out in space no doubt) anywhere in the base, helping them contain the more numerous Imperials.

Imperial defenders: The imperials had the simple job of holding the base but could be overwhelmed if enough assault ships landed.

An Imperial Joker allowed them to collapse a wall anywhere in the base, helping them contain the attacking Rebels. 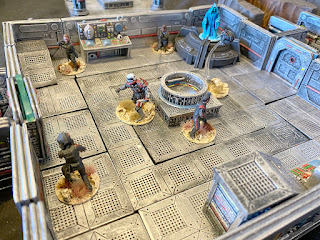 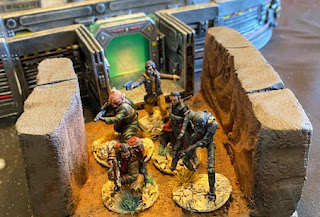 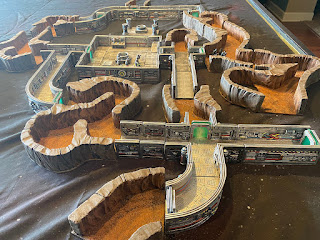 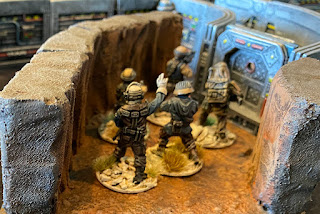 Rebel Attackers: They’ve got the guns, but you’ve got the numbers. The entire operation is to take the Imperial fort of Omicron. The fort is currently protected by a force field generated by the asteroid above. No weapons can be fired into the base or out. Ships and vehicles move to quickly or have too much mass to pass through the force field as well. The only way to enter the fort is with infantry until the force filed is shut down.

Omicron Defenders: It’s safe for the forces inside the fort, at least as long as the asteroid base above holds. Unfortunately, not all the Imperial troops can fit in the fort, and any troops inside are prevented from shooting out into the battle.

If a Joker was played by either side, any fighters that were pulled from the space battle could make their strafing run. 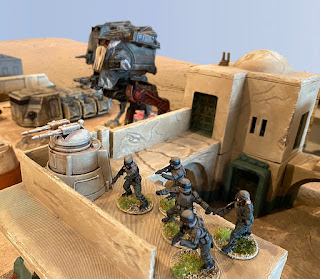 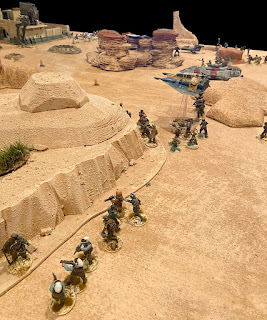 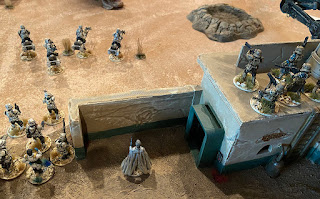 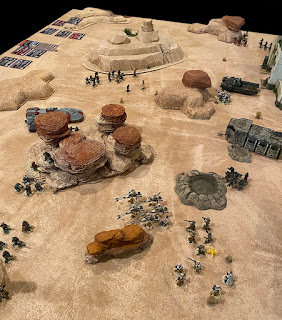 How the game went

The Rebel fighters flew straight at the base blasting away. The lighter armed and armored ships of the Empire were losing two for every one Rebel fighter they destroyed. The Rebels peeled a fighter bomber off to strafe while the Imperials used their single bomber.

The Rebels were aggressive with their fighters, but not the assault ships, which seemed to have their parking brakes on. The Imperials used a reinforcement token bringing a flight of TIE fighters on the board and the Imperial fighters that remained broke through the Rebel battle line and attacked the assault ships. All three were destroyed.

The Rebels were forced to use a Reinforcement of their own to bring new assault ships in.

Despite being outnumbered, the Rebels managed to inflict serious casualties on the defenders. The Imperial troops, not sure of where the attack would come from, had to spread their forces out.

The Imperials used a Reinforcement and the Dark Troopers waiting deep in the base activated. Desperate, the Rebels called for troops of their own, but none were coming. No assault ships had made it.

On the planet, the battle raged. Vehicles on both sides were the first casualties. Big things on the battlefield attract a lot of blaster fire. Then came the strafing runs. The fighters and bombers that left the space battle dropped bombs and blasted the infantry crossing the open terrain. An entire squad of Imperial speeder bikes went up in flames.

The losses for both sides were almost equal. But the Rebels would need more than that if they were going to take the fort. There was no sign of the force field dropping. The fort was going to have to be stormed the old fashioned way.

As epic and grand as this undertaking was, with all the terrain, vehicles and sheer number of miniatures, the games were really over by turn 2. During the space battle, the Rebels were not aggressive enough in trying to get the assault ships to the asteroid base. The ships were picked off by Imperial fighters and the assault teams on the asteroid were slowly being crushed.

This had a cascading effect down the line. The Rebels could have still pulled off is everything went just right. But that’s the fun of it, isn’t it? A close run set of games with lots of chaos and possibility. Making the fate of one table dependent on the others gave each game a real tension and need to succeed. It was great fun.

This approach to a set of games can obviously be used for other periods or genres. The space battle can be moved to the seas or the skies. The attack on the asteroid can instead become a key strong point that must be taken to support a larger battle happening. Or the set of 3 battles all become the same scale, fighting different flanks of the same larger battle.

The key to running the interconnected game comes from preparation, clear objectives and having a referee or game master for each game. Having communication between tables reduced to a minimum can reflect the realities of the battlefield and provide some fun roleplaying elements. “Why hasn’t General So-in-so responded to my communique? Has the messenger been killed? Are subspace transmissions be jammed?”

If you have a large enough club, like we do, you could easily run this at a convention.

Why we chose Fistful of Lead

Well, besides being unabashedly biased as the author, the core system lets you play multiple scales and genres. Once a player understands one rule set, its super easy to pick up the others. The players involved in the Starfighters game flying half a dozen fighters, could easily move to the Galactic Heroes game running a squad of 5-6 individual characters. Those players can easily move to the large Bigger Battles game where they are controlling squads of troops and vehicles.

All the same mechanics, all moving seamlessly between games.

Of course, you can use whatever your favorite rules are and do the same thing. It’s more about the idea of interconnected games than the type of rules used. Whatever gives you the best outcome.

This was a fundraiser for our local wargaming convention, March to Victory 2023. Players paid a fee to cover drinks and food with a little extra going towards the fundraiser. All profits went directly toward next year's convention. It was so much fun it was decided this will be yearly event. 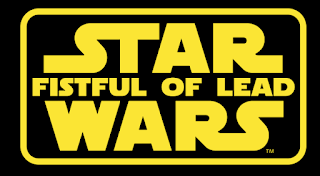 This Saturday we'll be running 3, count 'em 3, simultaneous Star Wars battles in honor of May the Fourth, Star Wars Day!

Battle #1 is a Starfighters! game with an attack on an asteroid base. The base is projecting a forecfield to the planet below. Rebels are attempting to get reinforcements to the assault team already aboard.

Battle #2 is an assault on the base itself using Galactic Heroes. The rebels must shut down the forcefield to the planet below.

Battle #3 is the attack on an Imperial base on the planet using Bigger Battles. The actual base can't be taken unless the shields are down.

All 3 games will be interconnected and have direct effects on the the other games. It will also show the versatility of the Fistful of Lead system playing 3 different sized games.

Posted by BaronVonJ at 8:58 AM No comments: