Just passing by: a TMWWBK game 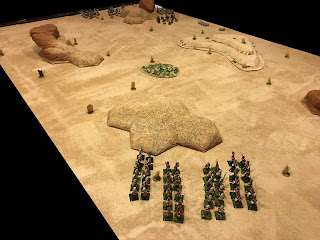 I played "the Sword and Flame" for years. I have had good games and really abysmal games. Too many of the mechanics really bugged me, and others too, if the number of house rules I've run across mean anything. 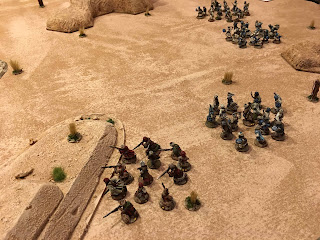 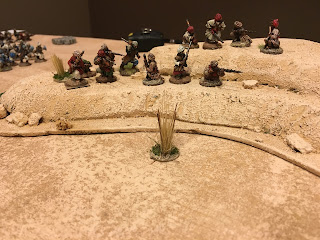 Don't get me wrong, it's one of the classics, but it's showing it's age.
Therefore, I was very excited when the "The Men Who Would Be Kings" came out by Danial Mersey. Readers will know I love his other rules, Lion Rampant, Dragon Rampant and Dux Bellorum. Our group has only played TMWWBK once before, and as a VSF game. I'm sorely lacking in opponents for my colonial powers so all miniatures in this game were provided by Scott Mathews.
The scenario involved two opponents running into each other on the way to another place. The victory goes to the player(s) who can get the most of their forces off the opposite side.
We rolled up Leader attributes and values for each unit and the Pathans got the worst of it. Two leaders with a 9... That means they need a to roll a 9 or above to anything besides free actions. 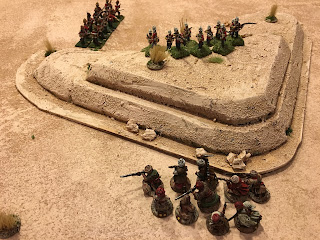 What followed was a slaughter. The Pathans had a hard time getting their shooters going and the close combat troops couldn't get close, while the Brits calmly moved forward, steadily annihilating the natives.
Historic? Probably. Fun, not so much. However, do not take this a s a negative review.
I emailed Mr. Mersey who quickly responded. I think what we both decided was that the Pathans definitely have to play to their strengths and weakness and need tactics beyond ATTACK!
The pinning rules make it really hard to do anything if you're stuck out in rifle range. Even if you manage to rally, you're stuck for a turn, surely to get hit again. What you do to protect them is leap frog another unit in front to protect them. An "going to ground" is every Native's best friend. More terrain too.
We'll try again stripped down with equal Leadership values and no traits until we get a handle on it. No House Rules yet... 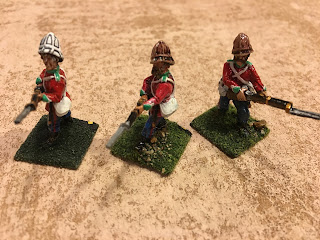 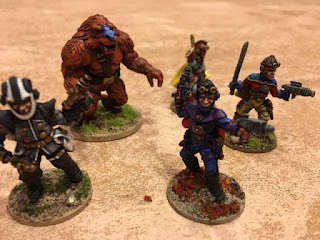 Kronos, High Tech Priest of the Robot Legion, has been captured on the planet Helios V by Emperor Xorg-Khan's forces. That villain, Xorg-Khan must think that by holding Kronos, he will gain control of the vaunted Robot Legions.
Our Hero, Dash Dixon has been alerted to the kidnapping, and with help from the Robot Legion is attempting to intercept them. Meanwhile, the native miners have surfaced to see what all the ruckus is about. And did that rock move...? 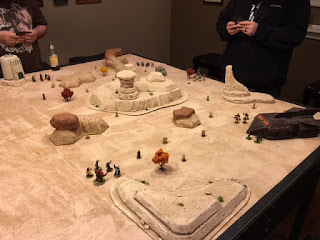 The action started with Xorg-khan's elite Azullian Shocktroopers dragging Kronos from his temple of the Mighty Cog and towards the awaiting Imperial corvette. Dash and his gang moved in from one side while the leaderless robots moved in the from opposite. The robots tried to engage the Imperial Navy troops but got three, count 'em, three "Out of Ammo" results in a row. Must be the targeting computers are off without their master. 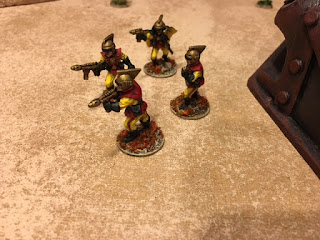 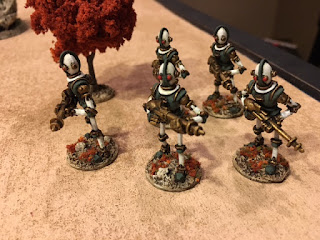 Amid the blazing laser fire, our Hero, Dash Dixon went down along with Lance Vortex. Dash wounded, Lance pinned.
Somewhere during the first turn, a Joker was played. I put one in the deck as an activation system for encounters. They function like the lowest value Ace for the player, but trigger game effects. For the first Joker, the miners moved. But what is their purpose....?
The next turn, Dash tried to get up. He didn't. If fact, he expired from his wounds. The Galaxy shuddered at the prospect. But wait, that isn't blood! It's hydraulic oil. It's a robot-clone! Somewhere, Dash is still alive!
But back to the action. 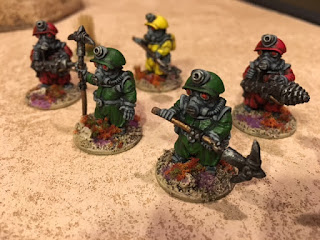 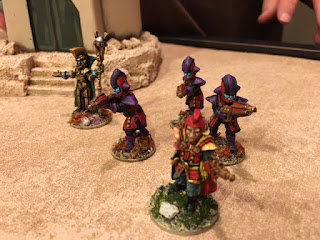 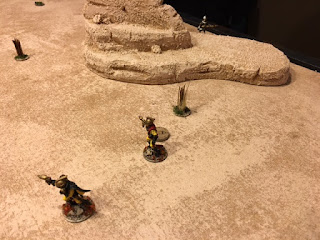 Imperial forces were making their way across the battlefield to the corvette while laying down blistering fire from blasters and mazers.
The miners were making a beeline for a damaged bot. Only Groth, hairy companion to Lance Vortex, remained of Dash's original crew. He fought valiantly, tossing Xorg-Khan's troops around with abandon. That was, until the second Joker activated the Grunk! 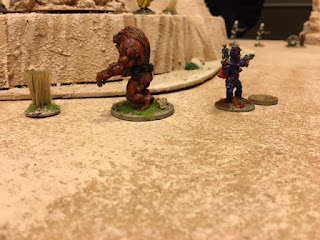 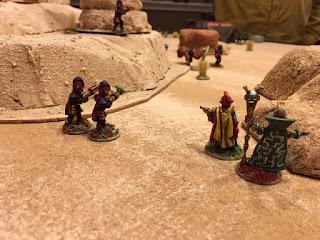 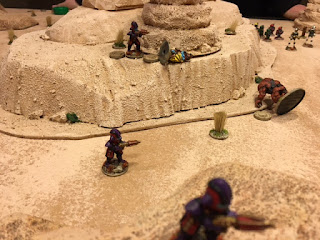 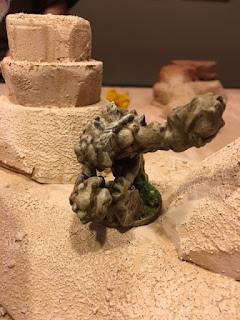 A precision shot from Robot 323B dropped Kronos's captor and freed him to race towards the Robot Legion. He didn't make it far. An Azullian Shocktrooper grabbed him and put a mazer to his head.
That's when Groth, fighting both the rock elemental and Azullians knocked the trooper holding Kronos into the next solar system.
The third joker "released" the corvette's crew to attack Robots, but it was too late. Kronos escaped, no doubt plotting his revenge against Xorg-Khan.

I wanted to reset play tests of Wasteland Warriors from the start. It was getting too cumbersome and losing some of the things that make FfoL great. So I really stripped it down to essentially Fistful of Lead.
The Robots got the Robot rule (duh). They have no sense of self preservation so can be targeted with ranged attacks at +1, but they ignore Pin results on the Wound roll.
Laser rifles and pistols, for this game, were just rifles and pistols. Although I gave the makers (essentially microwave guns) shorter range but can ignore partial cover.
Dash got the "Lucky" trait as well as Veteran. It didn't help. Lance Vortex had "Two Gun Terror". If he uses both actions to shoot, he rolls 3 dice and picks the best 2 results. It didn't help.
Stella Starfaie got a Sonic Boomerang that was basically a reusable grenade. She blew herself up.
Xander Zan got a bonus in Close Combat with his Stun Baton. He never got to use it. And finally, Groth was "Large" making him an easy target but more powerful in Close Combat. Because they had all the extras I balanced in with arming them with shorter range weapons.
All in all a good start and most of all fun. The miners kept everyone guessing until they rolled up on an injured model and fixed it. They just wanted to help the injured...
Wish the pics were better, but I was full of Azullian Ale. 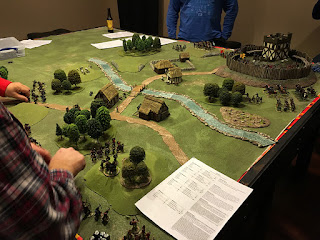 The Vikings were back. Mostly because I haven't painted any other Dark Age troops, also just because I love these miniatures. 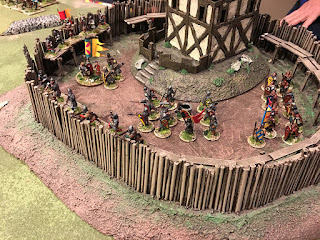 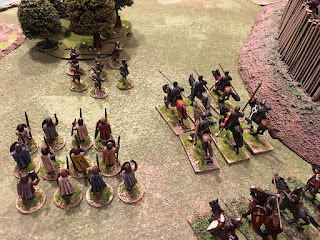 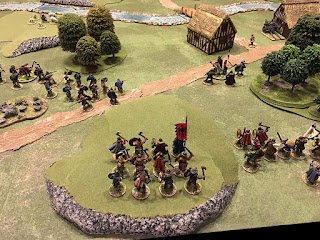 We played a variant of the "Tax Collector" scenario in the Lion Rampant book. We had one of the objectives in the Bailey. WE had 6 players controlling 12-15 points of troops.
The Vikings had a hard time getting started despite the house rule of always getting Move at least one unit. It didn't help one of our side didn't know you rolled 2d6 instead of 1. How did he think he'd get those Bidowers shooting on a 7+?
The Norman heavies crashed across the stream and bashed into a couple of unprepared Viking units. 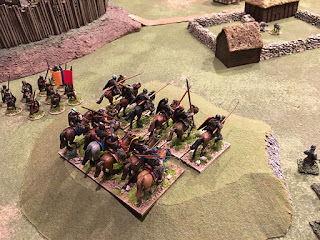 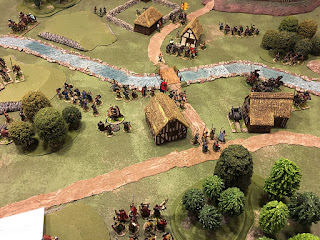 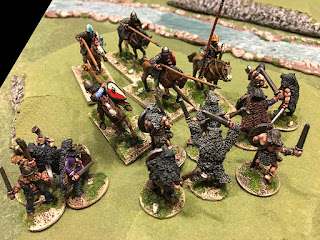 They didn't last long. The first two Norman units to be destroyed (along with their leaders) were said heavies. On the other side, the Berserkers had a poor showing.
The Normans were able to secure some tax tokens, but the Vikings surged forward finally and moved forward looting and burning.
It was a rough day for Leaders. Snake eyes were rolled 3 times for Lucky hits. All in all a great game. Still my favorite rules for the period. Now I just need to paint some Scots, Welsh, Saxons....
Posted by BaronVonJ at 4:57 PM 7 comments: