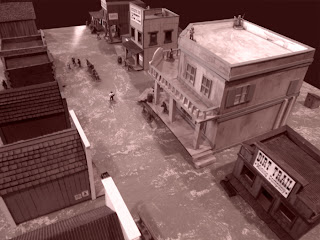 The Marshal finally captured the notorious rustler and bandit, Johnny One Leg. Now its a simple matter of holding him til the cavalry arrives to take him away to federal prison.
Problem is, nothing's simple in Lesterville. Word is, Johnny's gang is out to spring him. Not because of any loyalty, but because Johnny knows where the gang's loot is buried.
Then there's the Dirty Dixon Gang. Oh, how they hate Johnny. They just want him dead.
And then there's El Guappo and his bunch from South o' the border. Seems Johnny got a bit "familiar" with El Guappo's sister. Now the Mexican bandit is out to make Johnny an honest man.
The Marshal's got his work cut out for him. 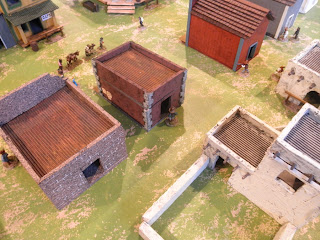 The mean streets of Lesterville
The Marshal could have locked Johnny in the jail, but that was too obvious, instead, he had him hidden somewhere in town. Manning the rooftops, the deputies had clean shots at most of the incoming groups. Johnny's gang took the first hit. Once the guns start going off, the people of Lesterville get a might spooked. They shoot at anything, that sticks there head in their businesses. (I borrowed this idea from one of the Yahoo Group. As soon as the first shot is fired, anyone entering an unexplored building, unless it's the Marshal's men, gets a shotgun blast at them. This keeps people from using the "hold up in a building all day" plan. It also helped the Marshal's men on the roofs. Anyone trying to get up at them was going to have run the gauntlet.) 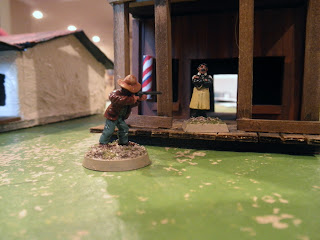 "What're you lookin' at?!"
The Dixon's smelled blood and went after Johnny's gang. There was fierce shoot out in on of the alleys. Almost all of my games end up with what we call "Blood Alley". Don't know why it happens, but it does. In one section of town, the bodies just pile up.
After much gunfire, El Guappo's gang figured out Johnny was hold up in the Saloon. He managed to get one of his men in, but he went down to a deputy. 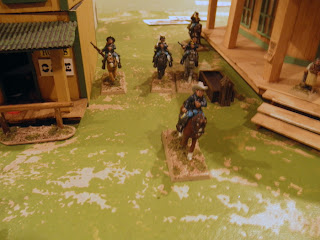 That's when the cavalry arrived. For a while they cut a swathe through town, but the concentrated gunfire from what was left if the combined gangs brought most of them down. In the end, only one cavalry trooper survived, but he got Johnny. And for once, Marshal Bill survived. 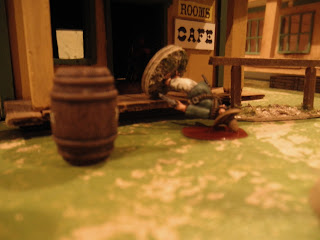 The infamous bandit El Guappo dies
Highlights of the game included one of Johnny's game fighting El Guappo's men in what amounted to a prolonged slap fight. Hand to Hand in Fistful of lead is notoriously brutal. Someone almost always dies. Not this time. One would knock the other down. Then next turn, the downed player would get up and do the same.
Also, one of the Dixon gang blasted away 4 times with a shotgun at one of Johnny's gang pinned on the ground . The poor guy missed every time. The downed player soon got the nickname "Lucky", only to bolt from town the next turn on a failed morale roll.
On a side note, I've had a jump in members to the Fistful of Lead Yahoo Group. We are a small but loyal group. Welcome to Lestervile!
Posted by BaronVonJ at 8:07 AM 1 comment:

Some highlights of this tear's convention include a 20 foot long pirate gameThe RECRUITS convention is just around the corner (September 9-11). Once again I need to stress what a great con this is. In fact, here's an interview about it. 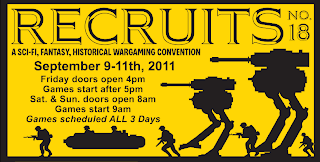 Some highlights of this year's con include a 20 foot long Pirate game, and the unveiling of Tomorrow's War by Ambush Alley games.
I think I'll cave and run something Friday night. Not the epic cave crawl I had imagined, but favorite of some kind. Saturday, I'll be helping Lead Addict run his Post Apoc version of my Fistful of Lead rules. Hope to see you folks there.
Posted by BaronVonJ at 7:58 AM 4 comments: 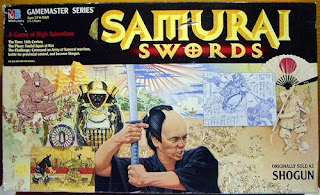 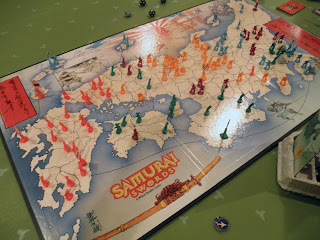 Some favorite images from "the other blog"

I just thought I'd post some images from my OD&D blog, in case you missed 'em. 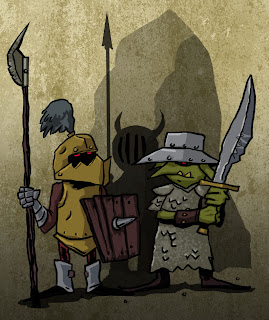 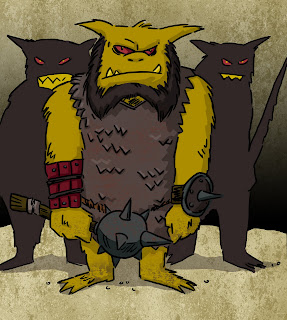 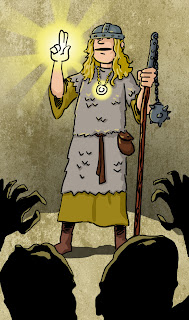 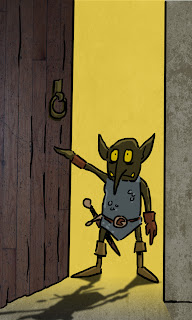 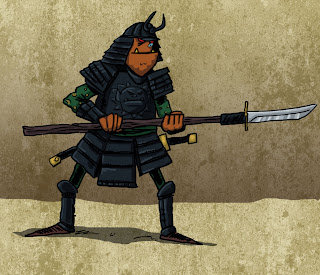 Posted by BaronVonJ at 1:16 PM No comments:

Thursday's game featured a playtest of Fistful of Lead: Wasteland Warriors. Full report over at Lead Addict.
This was prep game, not only for the rules, but for RECRUITS mid September. If you are anywhere near the KC area, make this convention. It's worth it. I have to work on preparation for my own game using the oft mentioned caverns. I'm leaning towards a Pirate or Viking game right now. As much as I'd like to do a retro SciFi game, I don't have the figs right now, or the money to get them.
Sunday I tried out the "in the Emperor's Name (or ITEN) 40k, non-sanctioed skirmish rules with the Boy. ITEN's been getting a a lot of good press and I had some old 40k figs laying around. It's about as simple as you can get, but still fun. Best of all they're free!
Individual pieces of the rules aren't new ideas, but they've been put together in new ways. We had a Chaos contingent vs some Space Marines. I need to try some other troops because its almost impossible for these boys to miss, and really hard for them not to save. So some turns there was a lot of dice rolling and no results. We played it twice, switching sides. The Boy won both.

Posted by BaronVonJ at 7:34 AM No comments: 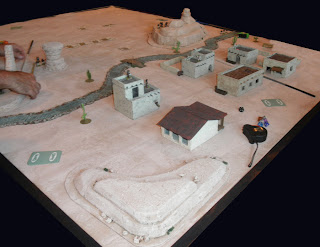 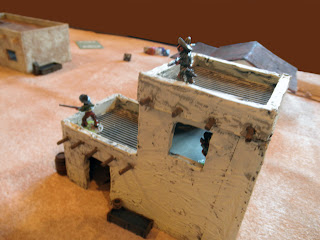 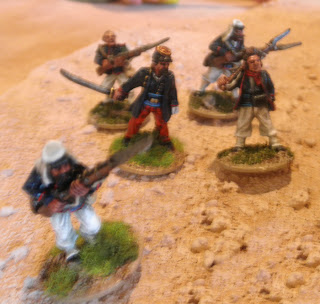 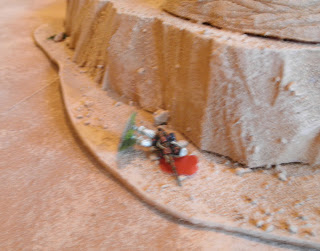 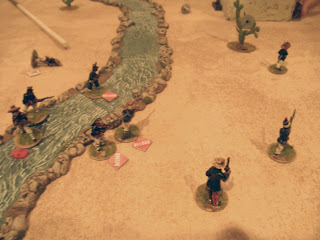 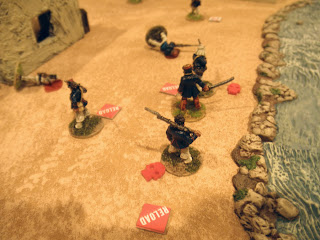 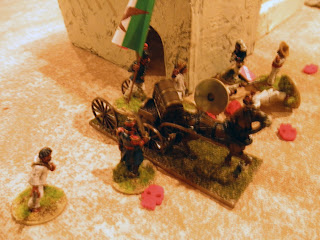 The fight for the gold becomes fierce
Posted by BaronVonJ at 7:34 AM 2 comments: 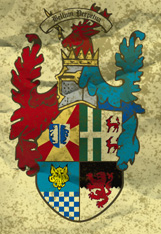 I realize news from the current struggle in Unkerlant has been sparse. Life and missing participants always plague campaigns, but I hope to soon kick start some activity.
Recently, Borogravian forces were bloodily repelled in the Arch Duchy of Volborg. The battle itself was particularly brutal on horse flesh, and both sides have become scarce on cavalry. Borogravia was able to find a pass through the mountains and across the treacherous River Vollen, thanks to traitorous cur of a local lord.
Meanwhile, across the country, Franistover and Zlobenia face off for control of the west, in what is sure to be a titanic battle (by Unkerlant standards).
Posted by BaronVonJ at 10:48 AM 2 comments:

I'm getting ready for the RECRUITS Fall convention in September. Usually it falls on my wedding anniversary and I can't attend, but this year's different! I can't say enough good things about RECRUITS. If you're anywhere in the Midwest, it's worth the trip. It's very kid friendly, has great vendors, great games and dirt cheap (free for kids and service members, $5 for everyone else). 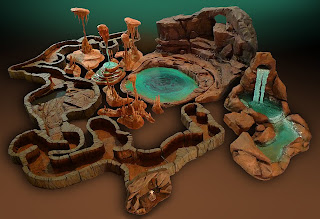 I want to unveil the the great cave system Ludstuff did for me a while back, but still haven't hammered out what the actual game will be. Pirates looking for Conquistador gold? Vikings seeking a great wyrm's horde? Spaceman Spiff vs the mole-men of Moon Six?
Any suggestions, people of the Internets? Needs to work for 6-8 players.
Posted by BaronVonJ at 8:32 AM 8 comments: