The Spectacular Six: A Fistful of Lead AAR

Last night was one of the most enjoyable game of FfoL I've played. And I've played a lot of Fistful of Lead over the years. It was a scenario I wrote years ago. So, in honor of the late, great Eli Wallach who passed away last week:
"The poor village of Pocoloco has been terrorized for months by the infamous Bandit El Guapo and his band of banditos. Now, the poor villagers have cobbled together enough pesos to to convince some down on their luck gunslingers to help fight the bandit king."
The scenario starts with the Gunslingers set up hidden within the village. El Guapo and d10 banditos start a one point somewhere outside of town. There was only one gap in the walls, and that's where the majority of the gunslingers laid in wait. One took position in the church bell tower.
At the end of each turn, a d10 was rolled. If the number was higher than number of live banditos on the table, another d10 was rolled to see how many showed up. Also, for each bandit killed the previous turn a villager was added to gunslingers.
Each gunslinger got use a d12 and randomly drew one trait. The banditos used the usual d10, and the lowly villagers had to use a 8.
To win, the banditos had to kill all the gunslingers. The gunslinger won if they killed 12 banditos. 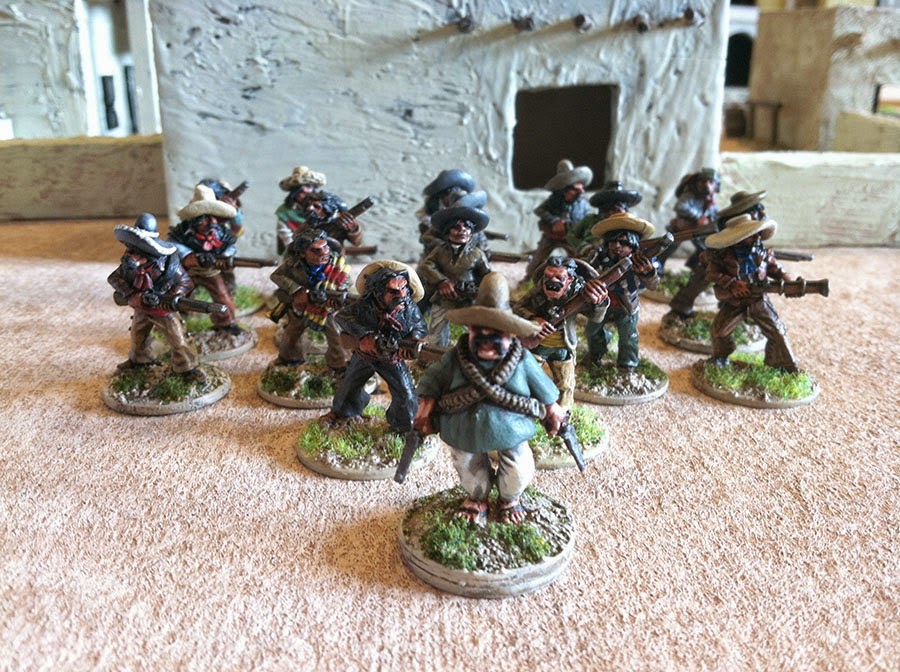 The infamous (I believe that means more than famous) El Guapo 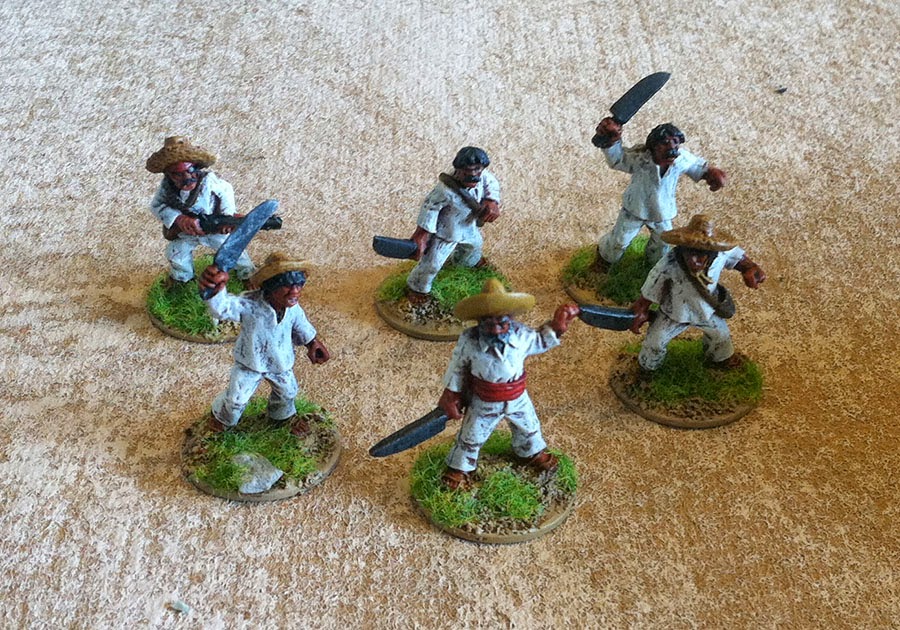 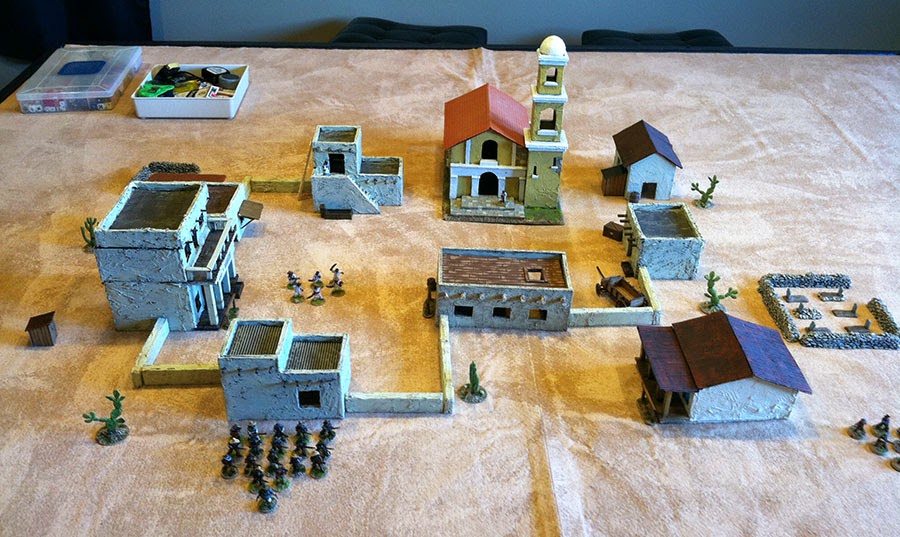 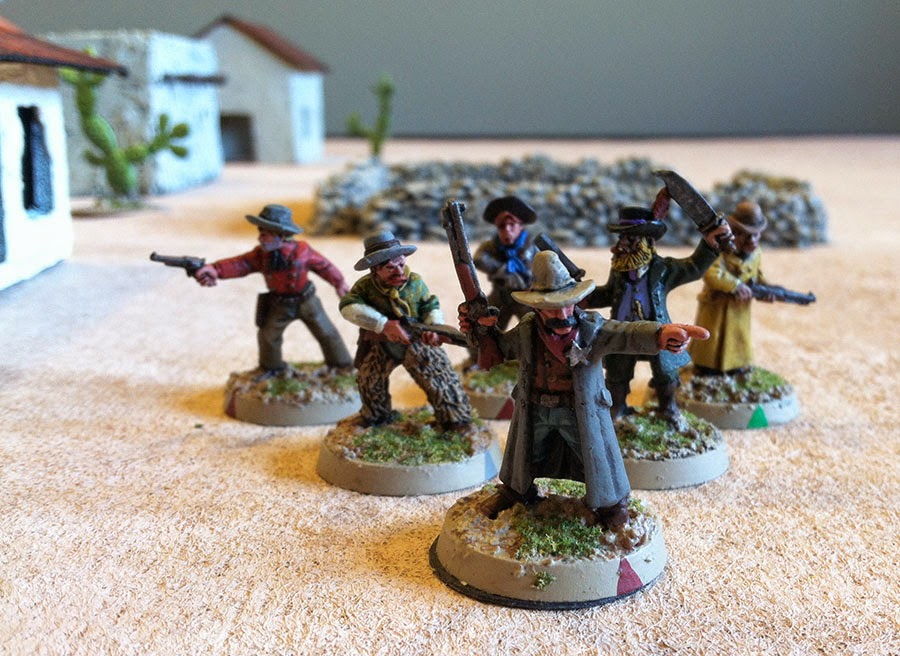 The ex Marshal and the other Spectacular Six 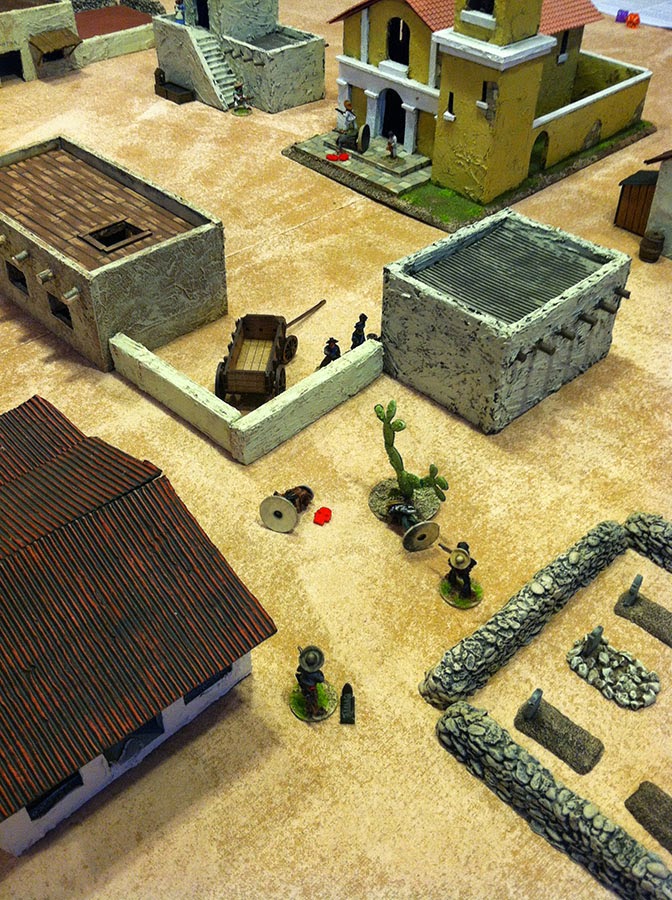 Rusty in the bell tower draws first blood to the banditos. While the Marshal drops so more in the street before he too is too wounded and seeks refuge in the church. 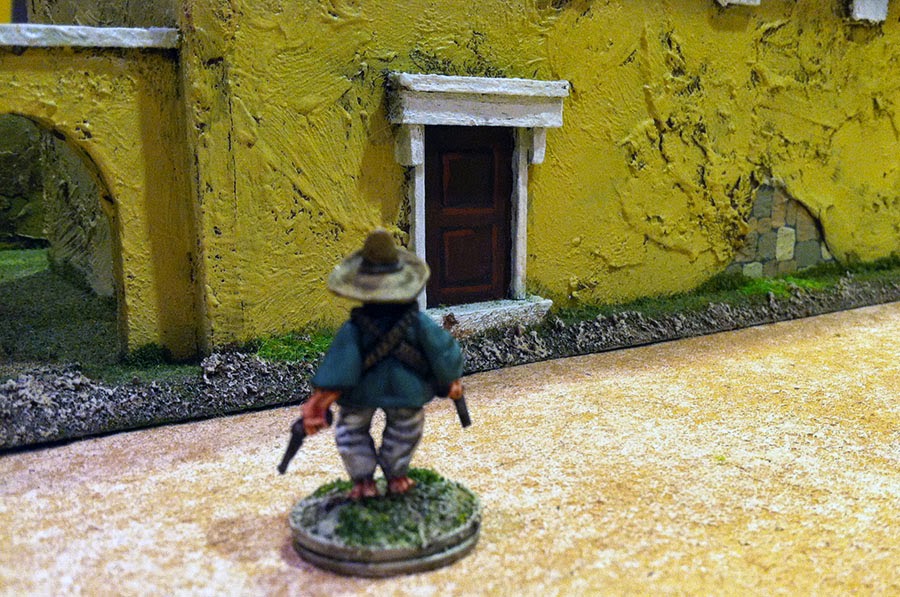 El Guapo makes a visit to the church via the back door. 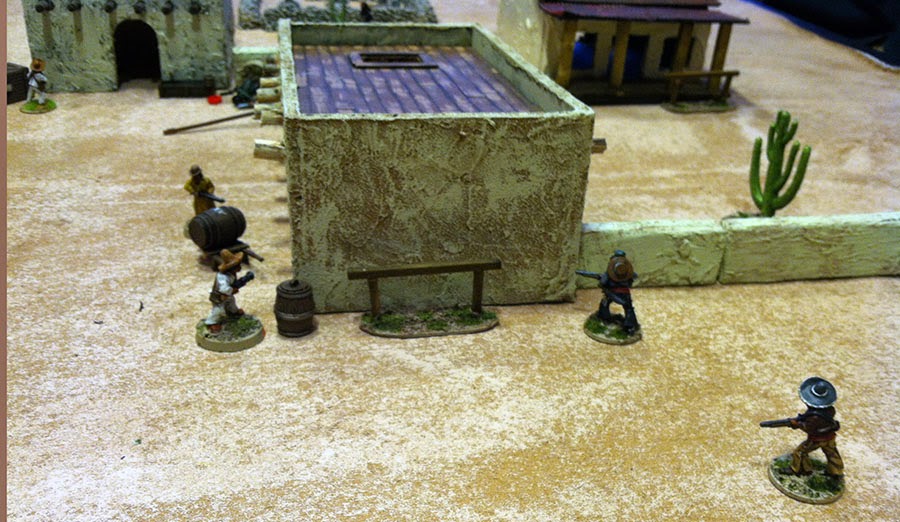 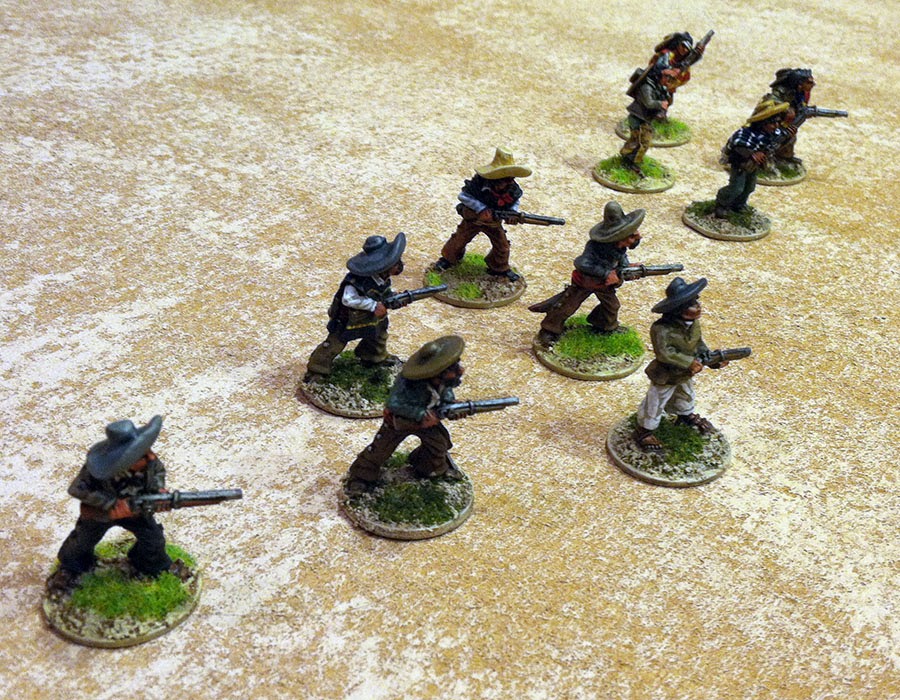 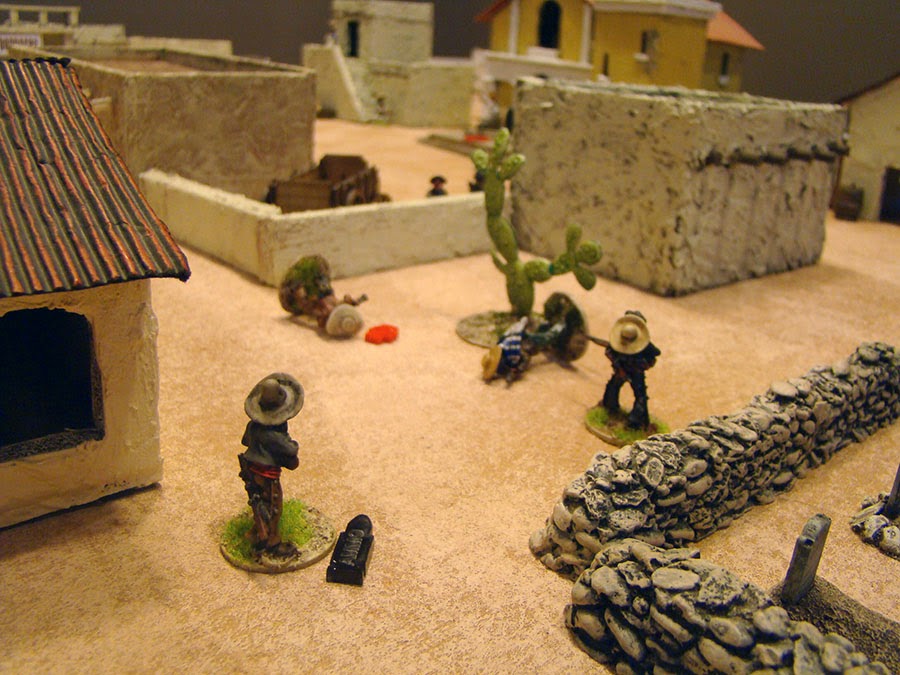 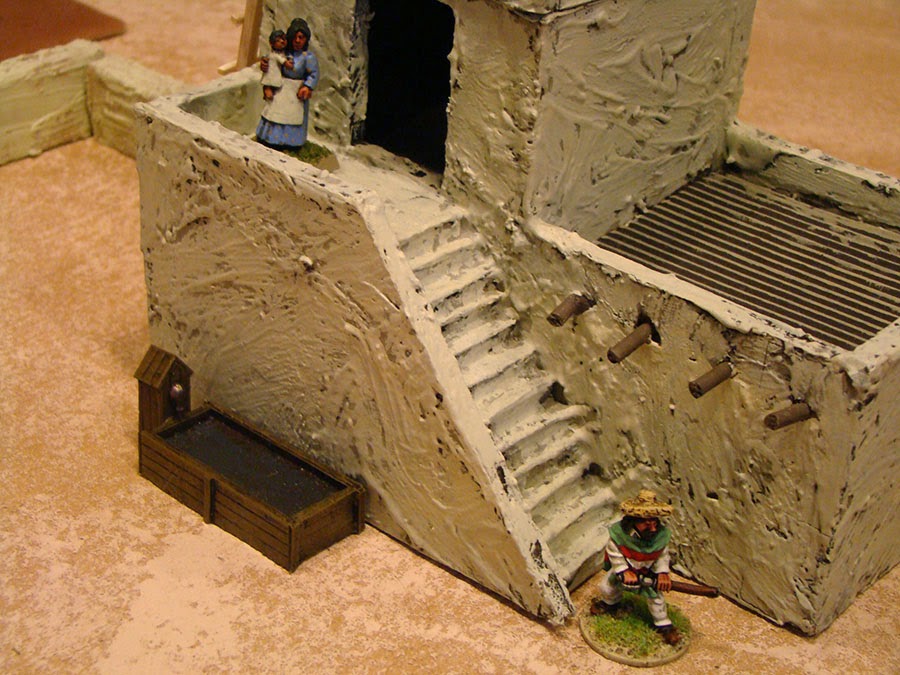 Can you hear the guns Fernando? 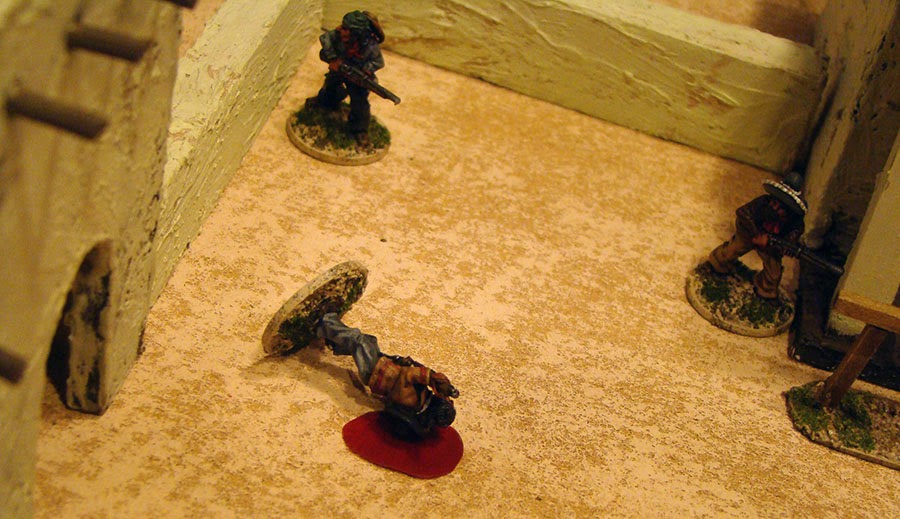 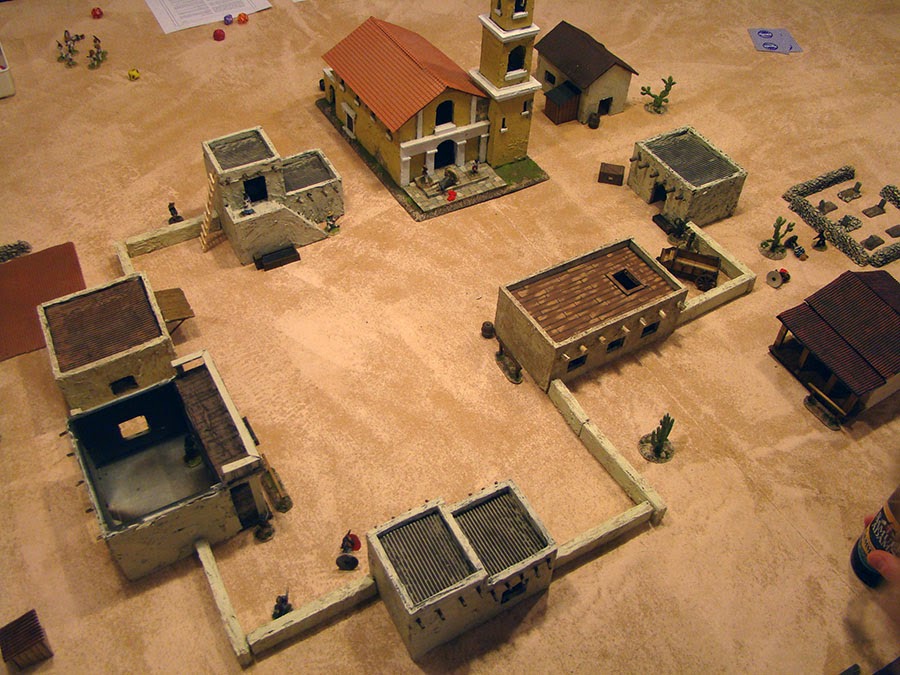 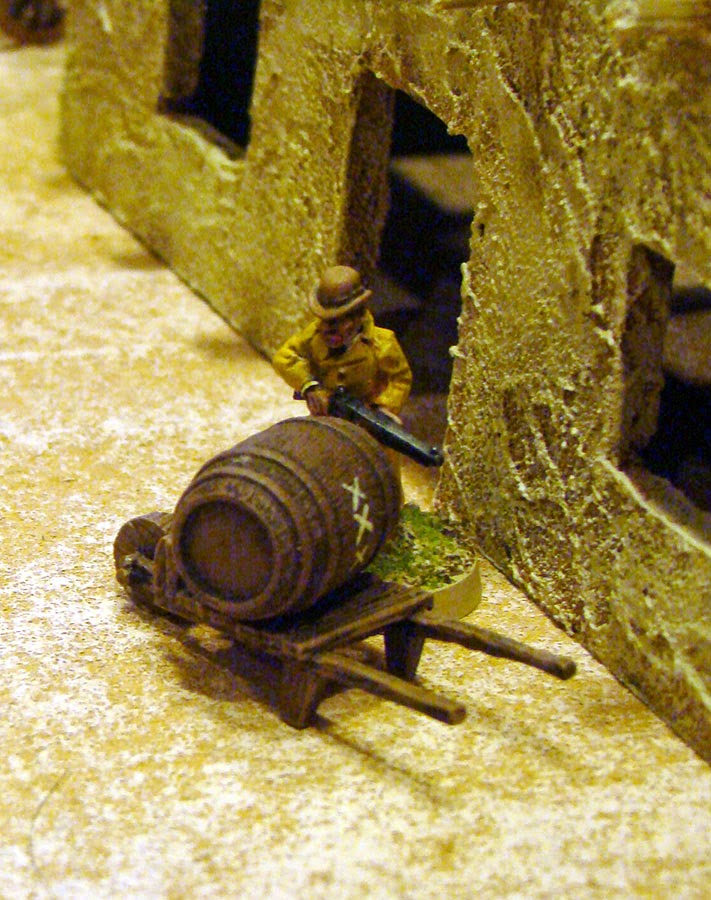 Handsome Pete hides behind a barrel of tequila 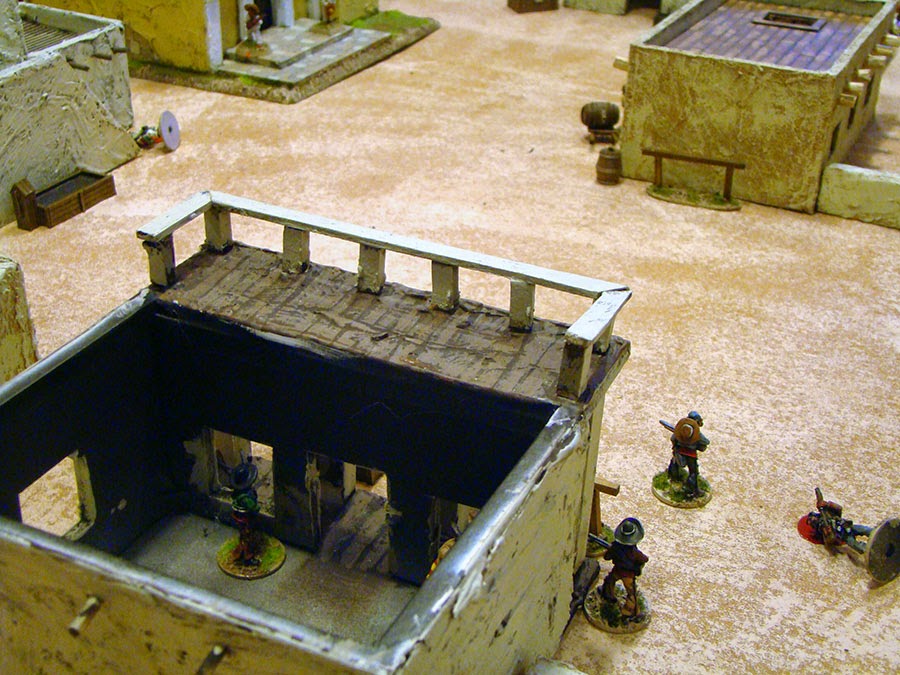 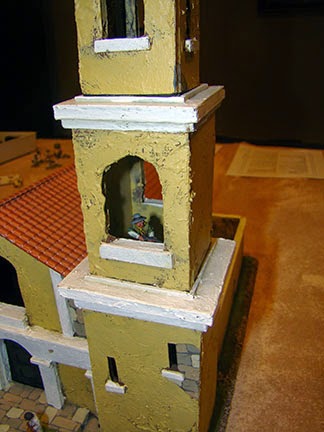 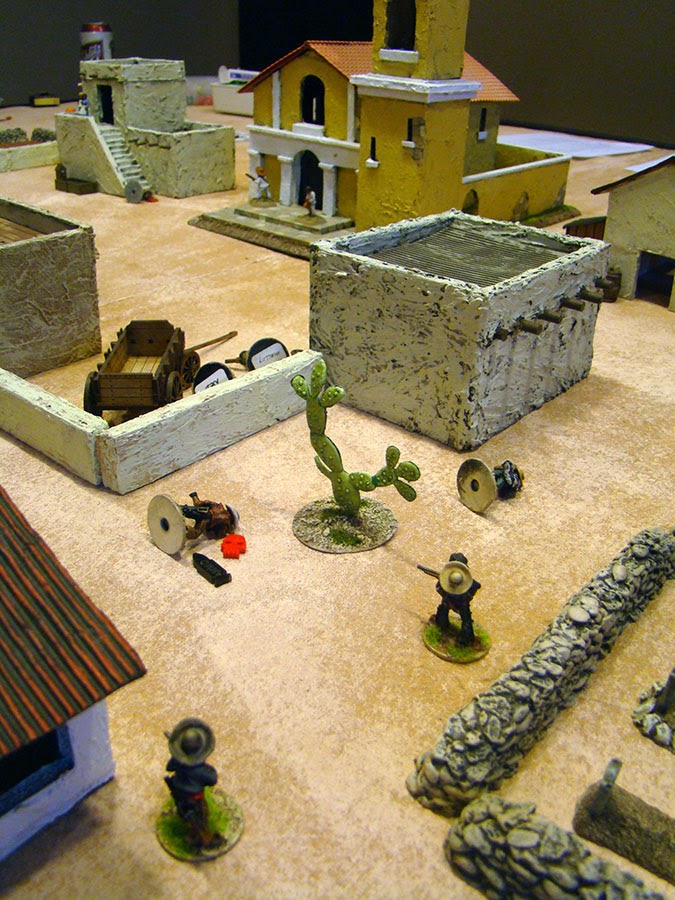 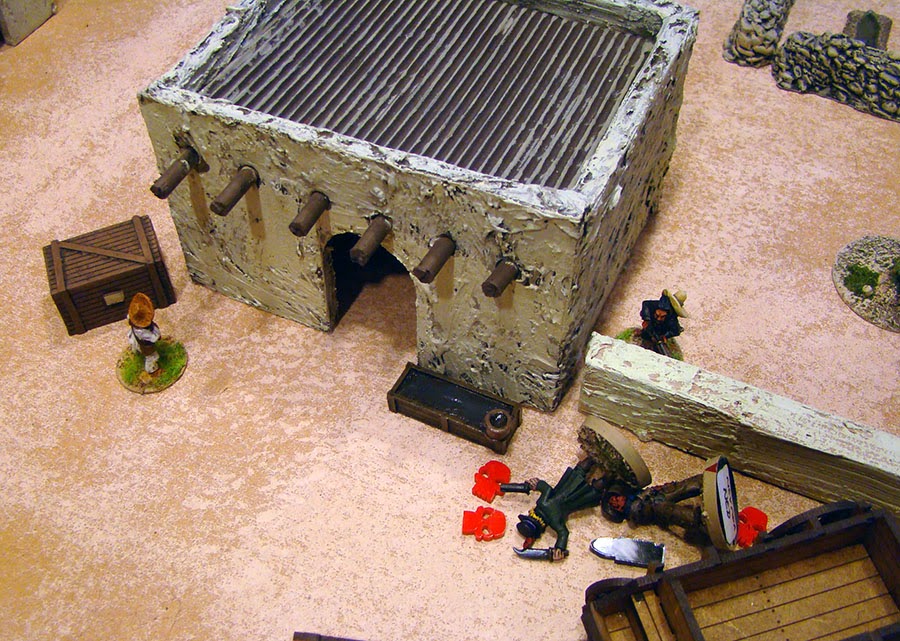 The gunslingers start to get wounded 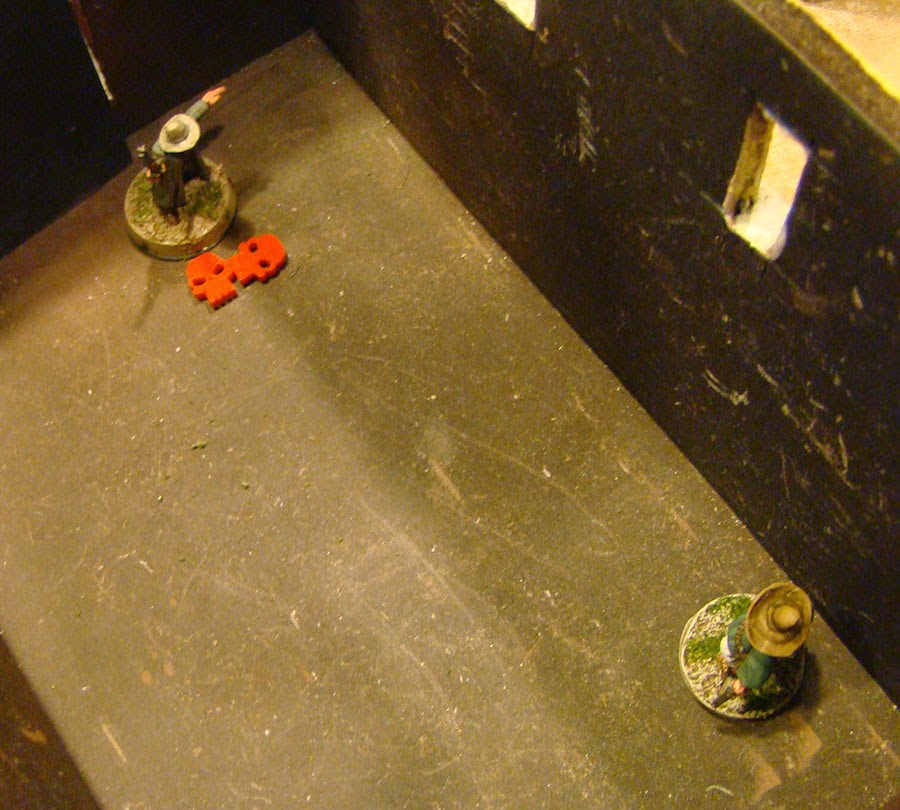 El Guapo corners the Marshal and kills him. It looks grim for the gunfighters 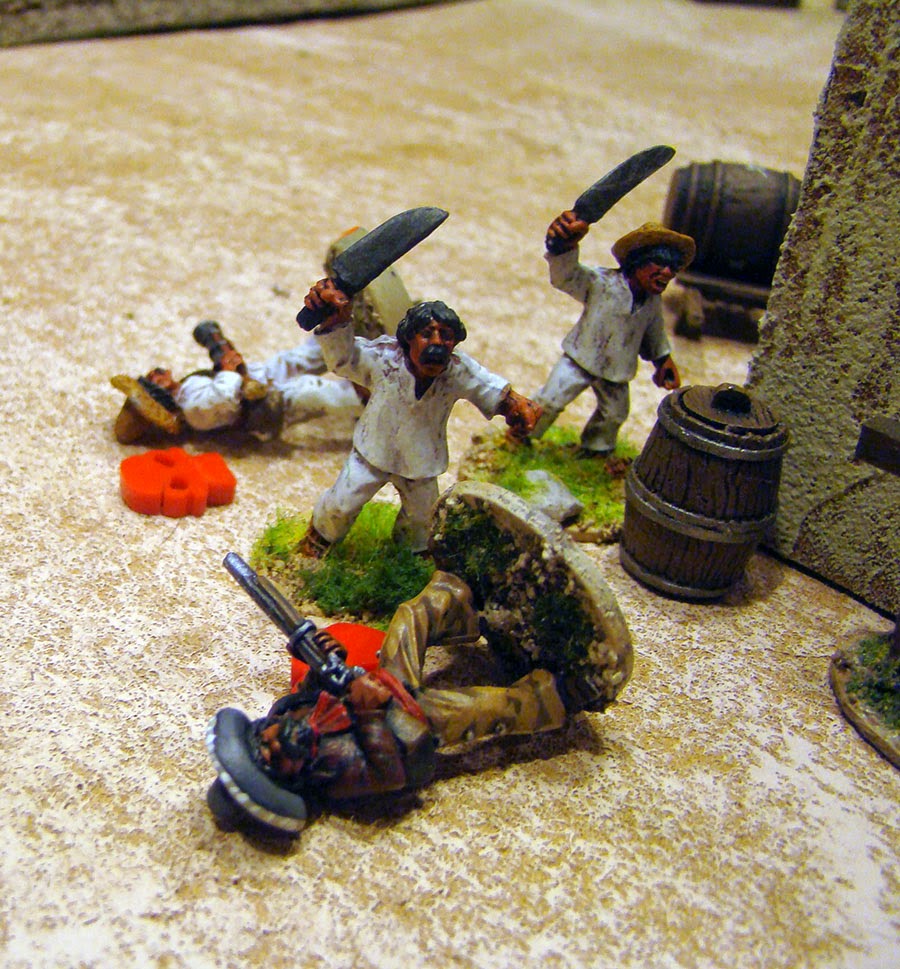 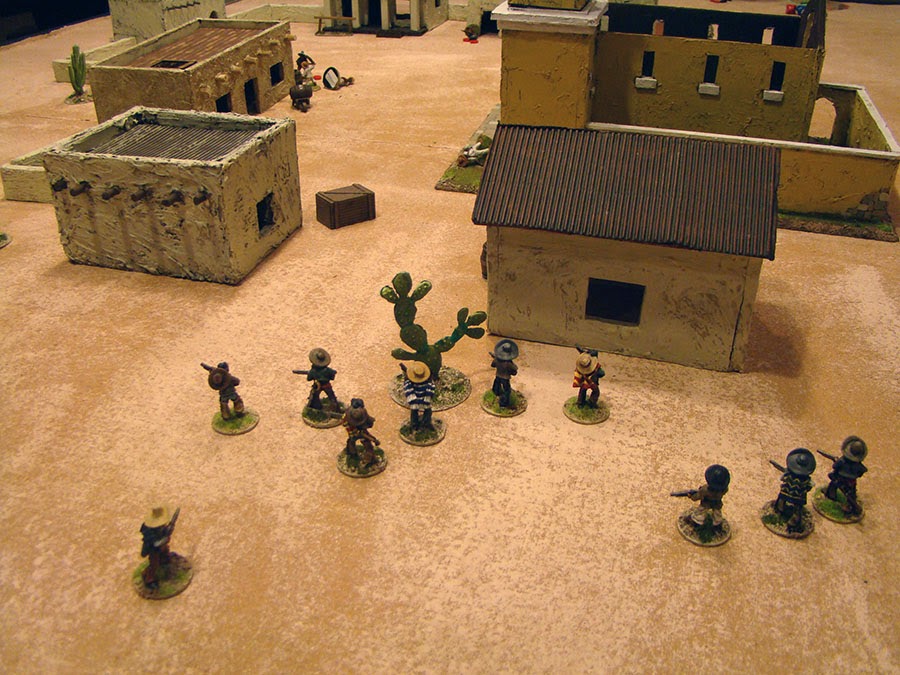 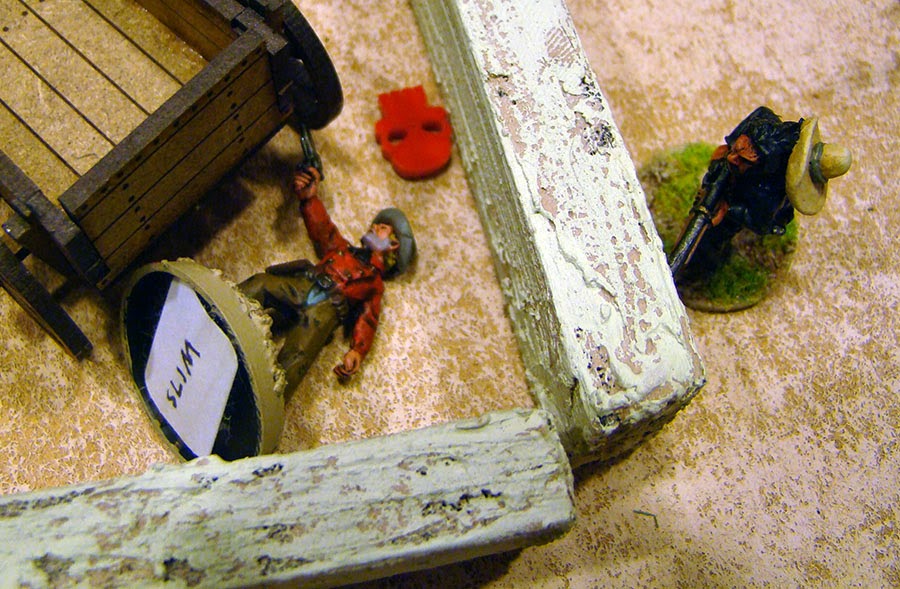 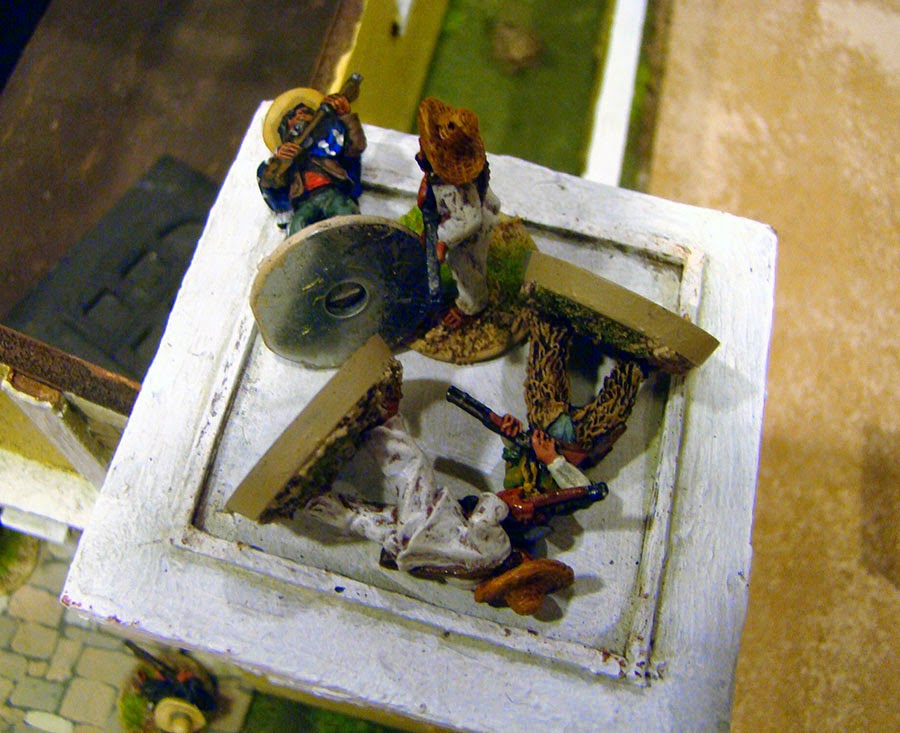 It came down to this: All gunslingers were dead but Rusty in the tower. He was pinned, guarded by one last villager. The banditos, leaderless, and with 11 dead already send in a man to kill Rusty. The villager kills the 12th bandito and saves the day! Federales show up and drive the rest away.
It was a tense, nail biter ever turn that swung back and forth. One turn the bandits got 10 reinforcements!
Once again Fistful of Lead handled it great. We had close to 30 minis on the table at one time and the game was done in under 3 hours with no slow down. I'll be running this one at the next con.

That was a great game. Don't think we have had one that was closer. Great pictures by Scott-de-Bald. It was a wee bit crowded in the bell tower on that last turn! Excellent scenario, thanks for putting it on.

Eli Wallach was one of the greats. He did a lot of great work and lived to a good old age.