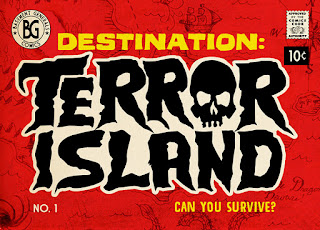 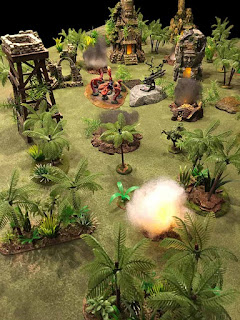 Last night we played the second in the "Amazing Adventures of Dutch Oven and the Fearless Five" Pulp campaign. I've been busy redoing my jungle terrain and Basement General Steve brought the temples, miniatures and the crazy-ass back story. Plus, the flicker tea-lights and "smoke" made it all very atmospheric... 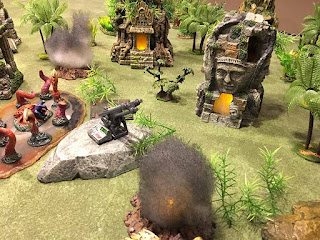 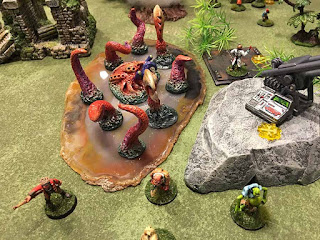 Continuing the story, Dutch Oven, his arch nemesis Victor Von Zombie, Rip Daring and his crew, and Roxy Rocket and her League were all returning from the Arctic to their various lairs when they are shot down over a mysterious island by a Death Ray.
The plot points: The radio atop a watch tower, the Death Ray, and vial of green blood, the trap door to Doctor Terror's lair which could only be opened after tracking down the monkey who was the only one with the security code.
We had six players. Me and the other Jay controlled Doctor Terror and his denizens of Terror Island. A collection of Dr. Moreau-esque mutants and stranded pirates turned henchmen, included Juan Jorge (more on him later). 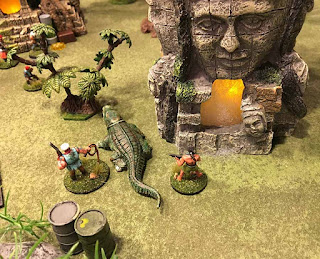 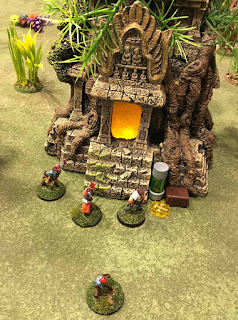 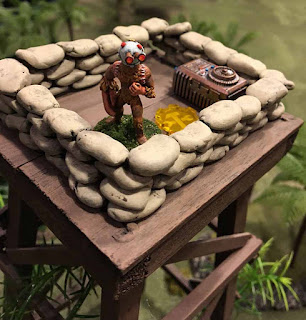 The truce between the players didn't last long. With the clock ticking, there was a mad dash to plot points. Doc Terror's forces focused on delaying them and funneling them towards the Kraken at the center of the jungle.
In true Pulp Alley fashion, Followers and Minions dropped quickly. All accept Juan Jorge, a nondescript pirate lackey who JUST WOULDN'T DIE! He alone held up the advance of Roxy Rocket's League and harrying Rip Daring's. "Ju in Juan Jorge's case now!"
Von Zombie ended up getting the radio, Rip the vial and Roxy tracked down the monkey only after he scratched the eyes out of an ally, Flint Michigan. 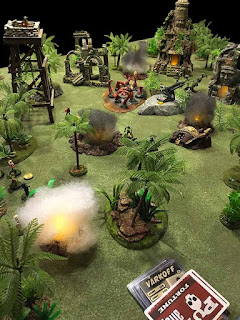 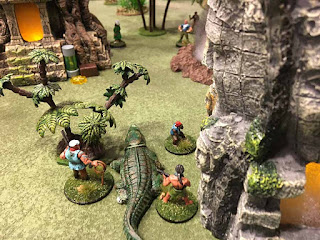 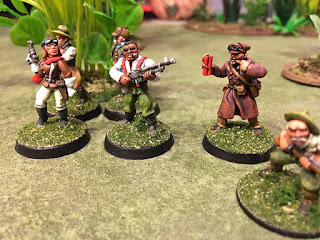 While trying to get to the evil Doctor himself, our Hero, Dutch Oven had to face the monstrous Kraken. He made good account of himself, but it was the end of the game, so we can only imagine the titanic battle that ensued. 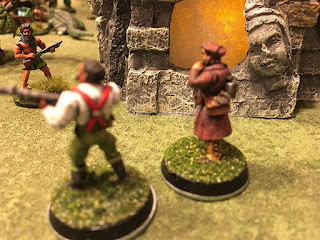 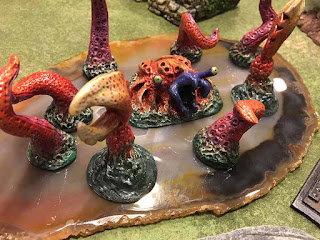 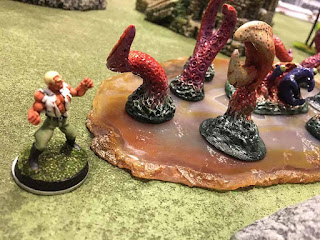 Some truly epic moments. We are getting the hang of large Pulp Alley games and you just couldn't beat the story. Unfortunately for my wife, the game room is directly beneath our bedroom. I'm sure the constant uproar of laughter kept her up.
I am once again thankful for the gaming group and understanding wife I have. All good sports that understand we are, after all, just playing with soldiers.
Posted by BaronVonJ at 9:23 AM

I have had to have a similar conversation myself . . "Sorry about the massive roar at 2am in the morning that woke you up but someone rolled a triple six . . . . . no really love that's REALLY funny!"

Great looking table. I really like your bog octopus as well. Do the denizens mostly create extreme peril areas, or are they essentially another team on the table creating mayhem?

The bog monster was a team in and of itself, merely there to sew ruin and doom. We usually have a Gamester for big games to help things move along, and he ran it. I think each tentacle had it's own stats!

Fantastic stuff a great table & characters full of character :) I can only imaging the mayhem of a 6 player PA game your poor wife :)

She's dealt with it over 20 years. Thursday night has become a sacred thing. I heard her explain to a guest: The game room is our church and the game table our alter.

Looks like a lot of fun! Wish I had made it

Sounds like a blast and the minis and terrain look great! I can't even imagine how chaotic a 6-player Pulp Alley game is! I'm a solo player myself, and pretty quiet, with no one to hear anything anyway. ha ha

That was fun, and the idea to have someone playing the baddies, just to make life miserable for every other league is brilliant.
I'm sure to use that (and enjoy it immensely!) in one of our 4+ man games at the club.
/Joakim

"Flint Michigan" made me laugh out loud ; )