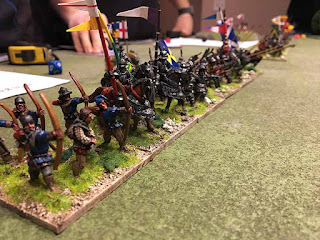 The King is dead. No doubt poisoned by his craven brother, Edwin. The kingdom is an uproar. Half of the nobles swear loyalty to Edwin, while the other half claim the deceased king's nephew Archibald is the rightful heir.
They meet at dawn on field of battle. 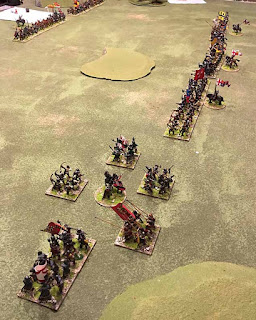 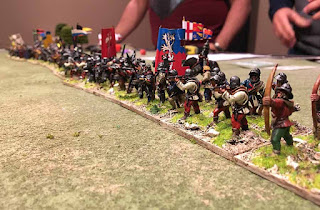 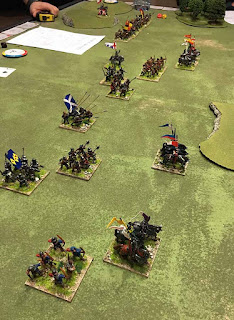 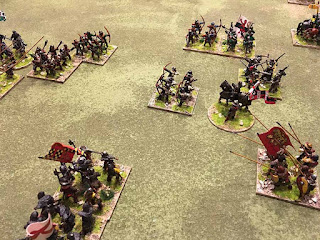 The rules of choice, as always, is a modified version of Flower of Chivalry. And as always, it was fun nail biter oil the end.
The battle started with a wild charge by Edwin's army. The mounted knights broke ranks and flew ahead of the rest of the army. They were cut down by arrows and mercenary handguns. 3 units down, 9 to go.
The center of Edwin's line crumbled early on, while Archibald's right cracked.
My corner of the battlefield, commanding the Pretender's left flank, was a mess. My men failed to follow a single order until the very end. Meanwhile, my opponent rumbled forth in a single block, looking very trained and professional until the very end. 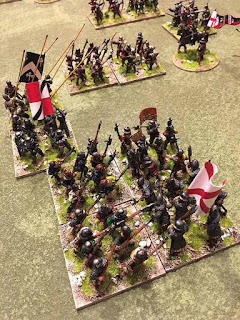 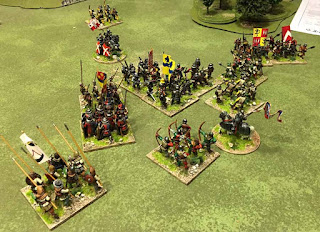 My rival, Roderick, Baron of Westgate, was one move away. He risked a charge order, hoping Edwin would draw at least a "2" from the Action deck. This would give him one action to move to contact, and one to fight. It wasn't really that risky. Edwin is a Brilliant commander and had mostly 3s and 2s in the deck.
The Reshuffle card came up. This acts as a 2 action card before the deck is reshuffled. I was doomed. My men stoically awaited their fate, almost as if they were made of metal...
But, Roderick was out of Edwin's command range, this meant that he had to make a command roll, or risk getting one less action than the rest of the army. Roderick, being brilliant, needed an 8 or less on a d10.
9!
This meant his troops only got 1 action. Since he had ordered a charge, his men crashed into mine but had no actions left to fight. Right into my spears and pikes.
Our turn. Archibald draws a much needed 3 Action card. That means since I'm already in contact, I roll 3 dice for each unit. Four, count 'em, four of Rod's units destroyed. Victory for Archibald.
Victory points were awarded to our side. An extra was given to Ulric, the noble holding the enemies center. Turns out he had a deal with Archie before the battle to not fight that hard...
Edwin was captured, and met the fate of all traitors. 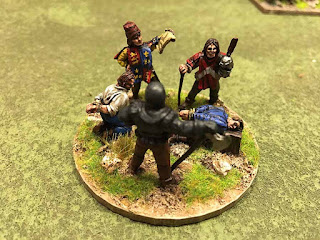 But, the war was fall from over. Rumor has it, one of Archibald's nobles had married one of the former king's daughters in secret, and now awaits to claim the throne! 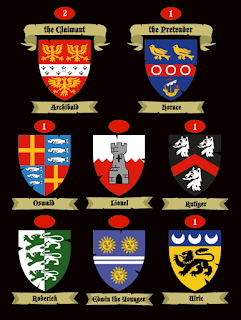 Posted by BaronVonJ at 9:45 AM

What a great game...and lovely figures too. Foundry?

Old Glory. Can you believe it? They're about 25 years old now.

Sounds great, a beautiful looking game, and the 'traitror vignette' is superb and...evocative!