Play test one was for Fistful of Lead's little brother Wasteland Warriors. It was fought out in the Spaceship Graveyard between 6 factions looking for loot. For whatever reason, the dice gods had deemed this a particularly brutal affair. There were almost no pinned results during the wound rolls. Everything was wounded or Out of Action.
Things went pretty quickly. With ammo in the Wastelands being pretty dodgey, we had lots of permanent out of ammo results, which lead to some close in action. 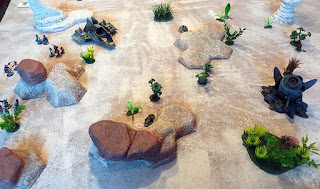 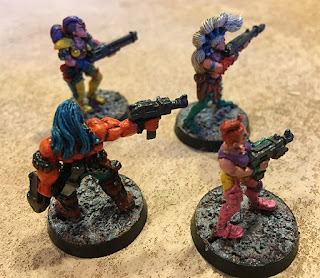 My crew. Orange Crush and his ladies. They would go on to win. 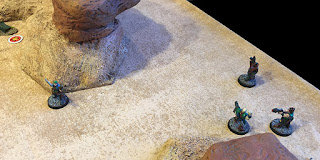 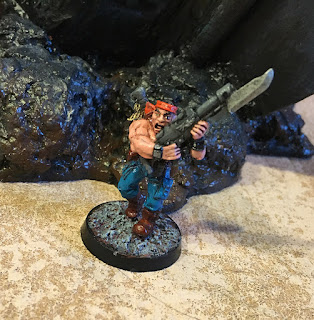 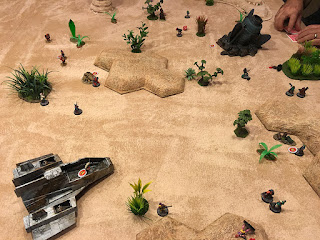 Next on the docket was my Arena game. The board is set for a Fantasy version, but layout-wise also works for Futuristic. The board pieces are geomorphic, perfect for replayability. You can set up a new arena every time.
Players run around grabbing upgrades and teleporting abut while blasting away at each other. This is one is in early play test stage and hoping to make commercially available as a boardgame on a larger scale. 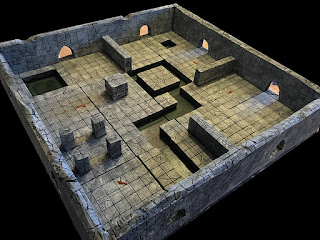 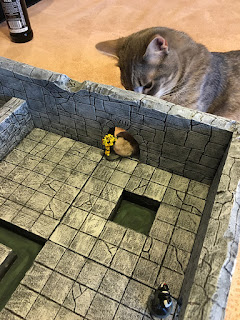 Don't stand too close to the doors! 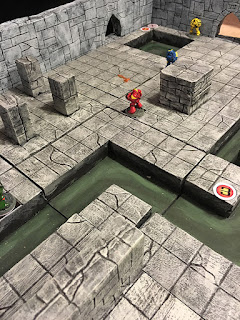 Good games. Good feedback.
Posted by BaronVonJ at 7:51 AM

Great! If I'm not mistaken, that's a submersible G.I. Joe toy as part of the spaceship graveyard. Made my list of the week's best:

In the Arena game you control a robot armed with a simple rapid fire gun. You can run around and pick up "upgrades" that allow you to better destroy your opponent and jump in teleporters that zip you around the board. But, you can only carry so much, and someone is always get something better so take those other guys out quick.
I always liked games like the classic FRAG, but found the rules clunky. This is an effort to open the classic arena game to new players. It will have SciFi and Fantasy variants.