Not my Fisful of Lead game

Just got a great AAR from one of Kickstarter backers: He sent me all of the photos and and the scenario set up. Great job Larry: 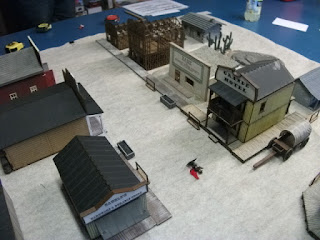 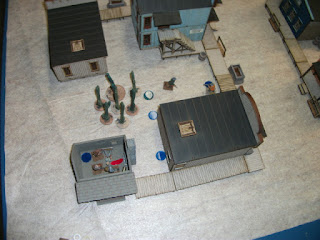 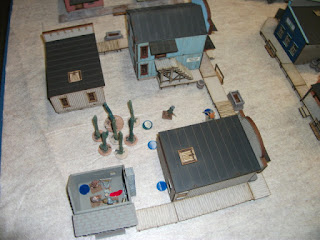 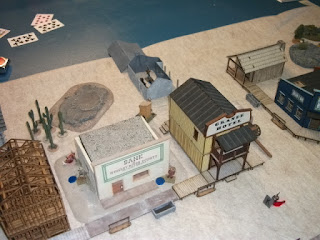 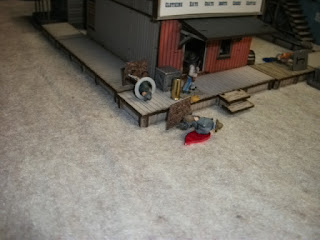 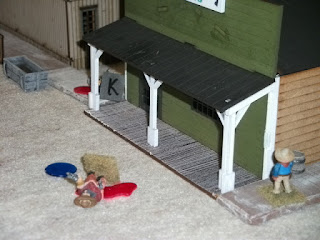 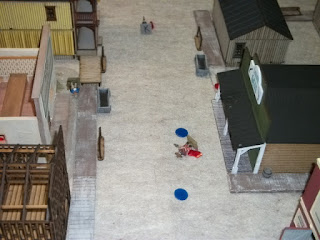 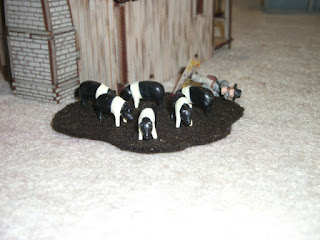 The 3 R’s Convention opened quietly as all five gangs searched adjacent buildings. Todd’s Terrors found Ye Olde Snake Oyl (each bottle healing one wound) in the Doctor’s Office and one stick of dynamite in the Assay and Land Office, while the other four had to be content with Small Loot.

Roger’s Renegades opened the ball on Turn 2 with a long shot at Mike’s Marauders, but missed all shots. Mike, with a Gunslinger in his gang, returned fire with a vengeance, and Roger suddenly found himself at half strength after Mike and an NPC each got one-shot kills. At the north end of town, Steve’s Backstabbers and Todd’s Terrors started sniping away at each other, to no effect. Jim’s Jerks, in the middle, looted the hotel. Steve’s gang found small loot in the general store, but failed to look again, missing both a sledge hammer and some dynamite.

Todd and Steve began a Hatfield/McCoy feud that would last the rest of the game. Roger temporarily set aside his aggression and quietly searched nearby buildings while keeping out of the line of fire. Mike discovered an axe at a building site. Immediately grasping the implications, he moved towards the bank. Jim finished searching the hotel and began sniping away at Mike. Turn 3 ended with several wounded gang members around the board.

Mike used the axe to good effect, chopping out a reinforced window of the bank and gaining entry. Roger moved into the hardware store, but a bad search roll kept him from finding dynamite and a sledge hammer. Jim took a Pinned result from the NPC inside Woo’s Laundry while Todd and Steve escalated their efforts resulting in most of each gang Wounded or Pinned, and dropped loot littering the ground in their corner of the board.

Mike moved over to the livery stable, finding another axe. Elsewhere, two newly discovered NPC’s proved friendly and gave some accurate advice about the situation. Todd and Steve spent the turn shooting and brawling but only one of Steve’s gang succumbed to wounds. Jim kept out of sight, mostly, and kept moving loot back to his hideout.

Todd and Steve kept feeding guys into the brawl and suddenly Steve was down to two cards, and Todd only one. Roger shot at Mike, who was moving towards the gunsmith’s, killing one and leaving another Pinned in the middle of the street. Jim looted Mike’s hideout while keeping his perimeter secure.

Pinned and unable to recover, Todd’s last guy crawled desperately for cover. Steve tried hard to finish him off, but missed or ran Out Of Ammo on all shots. Roger and Mike closed the distance and began a fruitless gun fight. Jim added insult to injury, but missed all his shots at Mike while moving towards the bank.

Card count on Turn 8: Todd 1, Steve 2, Roger 2, Mike 2, Jim 4. Roger decided to insinuate himself into the Todd/Steve feud and maybe get some easy pickings. Mike lost a man to Jim’s well-aimed fire. Todd finally rallied and put the coup de grace to Steve’s guy who had two Wounds already.

Steve raced around a corner and charged into Todd, rolling 8 times on the wound table. Todd noisily succumbed and was out of the game. Mike went after Jim, but missed. Roger decided discretion was the better part of valor and backed away from Steve’s accurate, but not deadly, fire nursing a wound.

Jim got his bank loot back to the hideout and announced he had ten loot items. We finished out the deck, but no one was in position to deprive Jim of the win.

Nice to see FfoL on another table, Baron!