Campaign for the Kingdom: The Beat Down 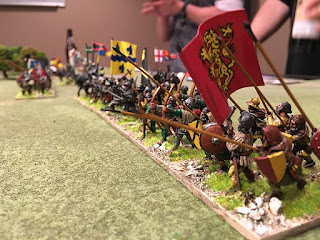 Our club has been playing our Medieval rules for decades. Over the dozens of times we've played it, I can count one one hand the number of times it has been a completely one sided affair. Last night was one of those times. 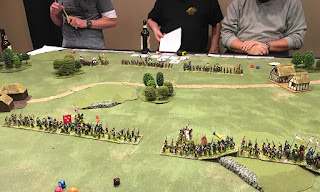 Lionel, Baron of Stone Keep (me) is inches away from seizing the crown once and for all. Across the field is his long time rival Roderick. We had an odd number of players, so Roderick's side had 3 players controlling 6 units a piece, while Lionel had 2 players with 9 units. Lionel is actually ata disadvantage with the command control rules we have. He's at more risk that his troops will do something stupid.
It didn't turn out that way. 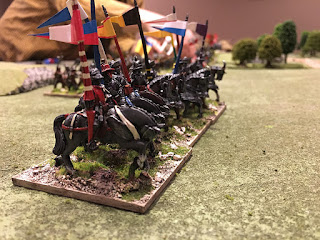 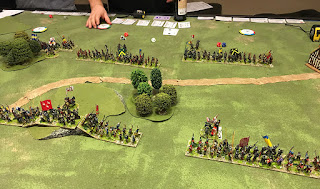 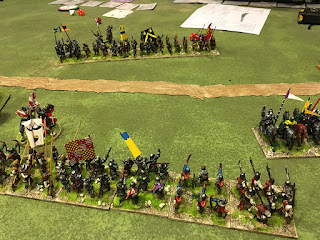 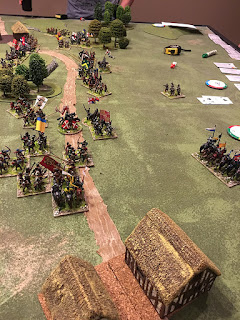 Ulric, on Roderick's right flank became bogged down in some trees, allowing the rest of his force to be temporarily outnumbered. Some quick movement and good die rolls allowed Lionel to slam into Oswald and wipe 4 of his 6 units out in a turn.
In the center, Horace was able to chip away at Roderick. Roderick's line bending back on itself until a horse shoe formed. A volley of arrows later, they broke.
Lionel's side lost 2 units (mostly light troops) to Roderick's 12. 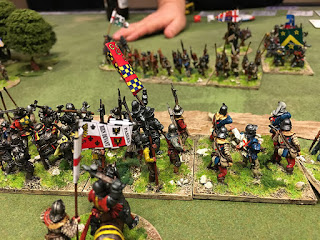 Roderick was beheaded. Oswald rewarded by Lionel. It was decided Oswald had betrayed Roderick, his troops not dead but ran away on command.
Horace angry that Lionel got all the credit, left his lord and will lead the rebellion in the next game.
Here's the situation. 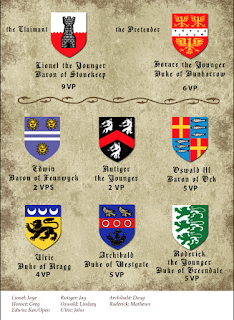 That looks fantastic! Would love to see your rules too.

Chris, you can check out the csmpaign over the years by hitting the "campaign" link on the right, or here's a quick write up:
http://baronvonj.blogspot.com/2011/05/campaign-for-kingdom-how-to.html?m=0

Thanks so much! And that rules set looks right up my alley.

I've used a version of your "Campaign for the Kingdom" rules before. Now that Wargames Illustrated has put all of their back issues on line, any chance you could remember the name or approximate date of the article on which you based your rules?