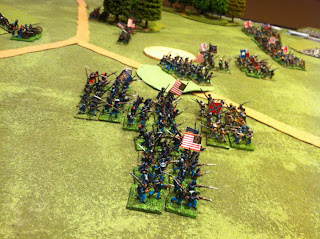 I was VERY excited when it was announced last week Longstreet, by my favorite rules author Sam Mustafa, would be available FREE as a lite version download. As the name suggests, it's a wargame for the American Civil War. This was my first period I painted and one close to my heart. I've loved Fire & Fury since it came out, but it isn't always easy to put a game of F&F on with the time constraints and player numbers for our regular Thursday night game.
Might & Reason, Fast Play Grande Armee, & Maurice have always given me a good game. So, when the chance came to bring two of my favorite things together I had to do it.
Longstreet uses a similar mechanism as Maurice and really has similarities to Commands & Colors too, in that it combines the card management system of a board game with the tabletop finery and mechanisms of a wargame.
To shoot or move your troops around, cards must be played/discarded. Each time you go through a deck, the cards are reshuffled and you lose 6. When you take "x" amount of casualties or there are no more cards, you're finished. 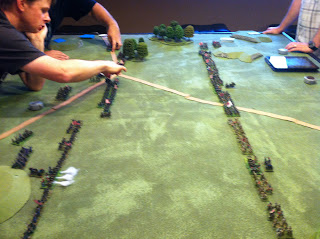 The Propaganda Architect contemplates his move
The Lite version, as you might expect, is really trimmed down. Only rules for infantry and guns, and no use of variations in troop quality and limited cards. It's made for 2 players, but I just printed enough for a 6 player game and kept the terrain simple.
The game started with both sides within gun range. As the cannons roared, hits were taken. Hits can can be cancelled by playing cards for their Morale value. But, there in lies your first decision: "Do I burn cards to save my troops, or save them for something bigger?"
Card hoarding might seem like a tactic. But it won't pay off. Your troops will start to dwindle quickly if you don't play some morale cards. You'll reach your target losses and lose the game before you ever execute that master plan. A balance has to be struck.
Then the troops closed. Shooting may not seem that effective at first glance. If your opponent cancels your hits you may on pick off one or two stands, but you're making him burn cards.
Charging is separate from Moving, both of which require the use of cards to activate. But, you can only do one or the other in a turn, so plan accordingly. The combat mechanism is simple but effective.
I think everyone caught on quick and I don't think we looked at the Quick Reference sheet or looked up a rule more tan twice. For a Lite game, it was a lot of fun.
I'm most excited for the full version. Each player creates a force that, in almost campaign, RPG-like tradition, your troops will get better, take losses, create heroes and lose them. Veteran troops are crack shots and can take a beating, but are leery about closing with the cold steel. Conscripts are full of enthusiasm, but are quick to crack once make contact with the enemy. I can't wait to see what this game does in 28mm! Sorry you missed it John.
Next week we continue Mustafa month with some 6mm Fast Play Grande Armee.

Posted by BaronVonJ at 8:30 AM

Nice report Baron. I liked Longstreet too, and it is going to be interesting once we get to the full rule set.

A couple of those special interrupt cards were particularly vicious. The one Reese dropped on me for Supply was huge. They really add a lot of flavor.

I will get the map out for FPGA over the weekend.

I'm really looking forward to these rules - I hope the fill the gap I perceive between a light game like Black Powder and a more detailed game such as Fire and Fury, Regimental
Miles

I thought the rules almost made ACW enjoyable!