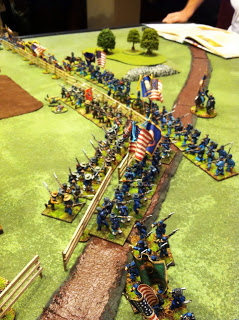 First, last Thursday's game:
John & Jason brought over their lovely collection of 28mm ACW. They both wanted to give "Bullrun to Gettysburg" a whirl. I can say one thing about Foundry's rules now. They're consistent. Wow. Worthless QRS. Had to constantly check the book. Casualties are by figure, but firepower is based on stands? Morale is almost impossible to fail so you hammer away until a unit's almost gone. There were optional save rolls to, huh? And, I'm supposed to keep track of the number of volleys I've fired. No thanks. John gave a full report over at his blog with pictures at Johns Curio Clashes .
There are plenty of better rules out there that do it better. But, as I said on John's blog, I still spent 3 hours with good guys, good minis and terrain, and good beer. That's all that mattered.
Basement Con:
Here's the schedule if anybody out there is interested.
Thursday: GASLIGHT, starring the Secret Six.
Friday: Hail Caesar Fantasy in 15mm with all the goodness from Lead Addict.
Saturday 1pm: completely open. Might do a role playing game, might be good old fashion board games.
Saturday night 6pm: Pulp Alley, Into the Caves of Madness
I will post all the lovely-ness.
Update: Almost done with the read on "In Her Majesty's Name". Great as I suspected. Interested to find out "In the Emperor's Name" got a 3.0. What I found odd was the newest version doesn't use a d10 as IHMN does. The d6 of ITEN always bugged me. Why not make like IHMN? My retro Sci-fi fgs might finally have a ruleset.
Posted by BaronVonJ at 10:20 AM