Four wonderful days of gaming (with a couple of chilly soccer games thrown in), what could be better?
Thursday night, I thought we would have a smaller crowd due to everyone cashing in their passes for Friday and Saturday, but actually had six people show. I've had the Perfect Captain's Shadows over Byzantium for years, but never payed. If you haven't visited the Captain's site, you're truly missing out. They do high quality board and miniature games for FREE! (other than they ask you make a contribution to one of the many charities on their site). 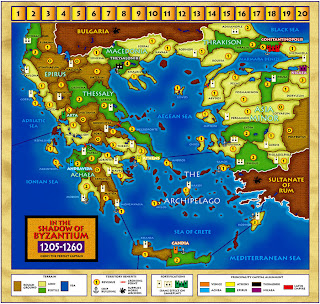 I like this particular game because:
1- It's a cool under used period. Right after the early Crusades in Greece and Asia Minor, so Frank-Norman type cavalry mixed with eastern style armies.
2- Lots of treachery, ripe for a play by e-mail campaign, with possible mini battles.
It took awhile to get placed and started, cutting out counters, learning the rules. I think most players would have set up different if they knew how the rules would unfold. I started in Sparta, more or less, and spent most of the game getting hammered from the north. I have a few questions into the supporting Yahoo group because of some missing rules, but otherwise a decent first play.

Friday night was some good old fashioned Role Playing games. My kids have been begging me to play Mutant Future ever since we rolled up characters months ago. MF is basically Gamma World from the early days of RPGing. I look back on my Gamma World days with great fondness. It was a crazy post-apocalyptic world of mutants, robots and fun. This time, I got to be on the other side of the table and actually play. I was the only Pure Strain Human in the group. As such, I got none of the fun mutations, but have better resistance to radiation and can understand ancient tech better. I named him Bili the Ax after a favored character from the Horse Clans book series.
There were 5 kids and 3 adults playing. One was a friend of my daughter's who had never played any kind of RPG. She must of liked it, because even after her parents picked her up, she kept texting my daughter for updates on what was happening.
Highlight: Slothnug, a slow slug-like mutant with no pain receptors (so the Gamemaster keeps tract of damage, not the player) had been getting hammered by fire from some Pigzies (militant fascist pig creatures). After taking them out by use of weather control (ever see Twister?)he finally able to assess his damage. He was described as "swiss cheese", with holes all through his body you could see through.
Pt 2 to come tomorrow.....
Posted by BaronVonJ at 8:52 AM