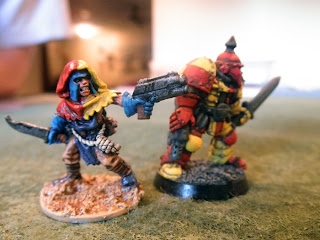 Oberon VI is a planet of steaming jungles and deadly flora. But it also holds the vast treasure of a lost civilization. Space pirates have long coveted this lost wealth and often send expeditions to retrieve it. A lone patrol ship of the Intergalactic Federation is tasked with keeping Oberon VI's cultural heritage intact (at least until they find a way to take the treasure themselves). 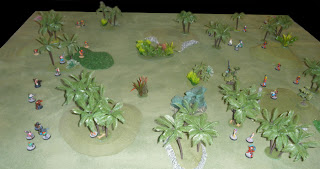 This was the second playtest of Fistful of Lead using the future combat mods. I wanted to try out the armor rules. Enter 3 gangs of Space Pirates vs the Galactic Patrol and two gangs of hired guns. Each side's leader got armor. For this scenario we didn't distinguish between ballistic and reflective armor (ballistic, of course, only protects against bullets while reflective only stops "frickin' lay-zers"). 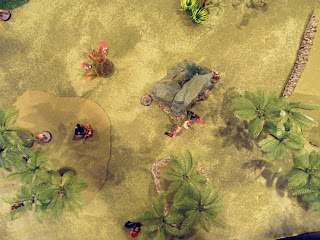 Overhead view of the carnage
First kill went to the Federation sniper who dropped a pirate heavy from long distance. Overall the game played like most Ffol games, mostly bloodless at the beginning then the bodies start hitting the floor. The Boy put down three guys at once with a shotgun blast. No kills, but put all three in pinned-land.
The armor rules worked pretty seamless. I think there's a lot of fluff here athat could be thrown in with different weapons and effects. Lasers were effective but not completely unbalanced, so I might give them a longer recharge time (out of ammo).
Next up, vehicles! The challenge with them will be to make them fit into the ease of the FfoL game without making them too unrealistically mobile.
Posted by BaronVonJ at 7:58 AM

Regarding vehicles, I would presume that there would be some sort of "anti-vehicle" technology available to flumox them . . . some sort of counter-measure . . . not so that they completely "fry their electronics", but that will limit them . . . a special weapon type of widget.

Anyway, an idea to work with if it suits you.

Not so worried about vehicle combat as I am moving them.
-J