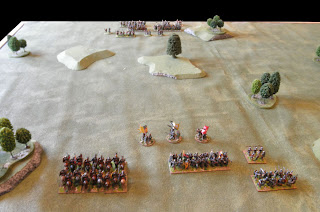 Last night saw the Viking/Norman battle of Lone Tree. Seems the northern raiders decided to take advantage of the chaos involving the Norman conquest of Britain. The Normans, led by Guilliaume "not the Bastard", took offense to this and cut the Vikings off on their way back from a raid. Laden with loot, and little tipsy, the Norse led by Scot the Gray, decided to take a stand. 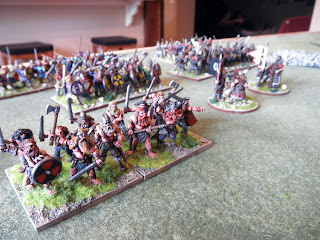 After the battlelines were drawn, the Vikings, liquored up and pissed off, moved first. Billy the Axe, on the Viking left held back, while Scot the Bald sent his men careening forward. 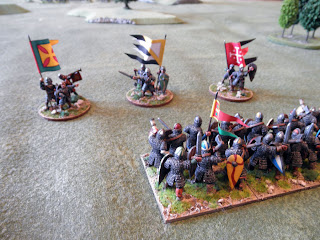 The Normans went next. Guillaume, in the center was wary while his knights on both flanks led by Sir Jay and Sir Gregory advanced. 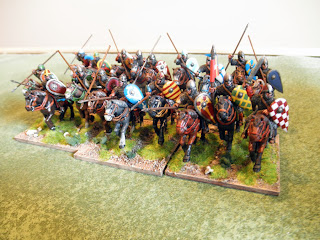 The cavalry actually managed to hold some restraint at first, but then let loose, like everyone knew they would. Unfortunately, the horses were almost blown by the end of the charge, and Sir Gregory was forced to hold up short and regroup.
This gave Scot the Bald's men a chance to charge themselves. One unit of knights made their escape while two others took some knocks. 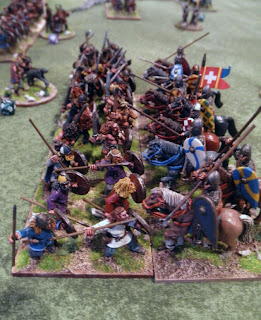 In the center, archery was exchanged. Norman accuracy was better, and one of Scot the Grey's Huscarls decided Valhalla could wait, and retreated. 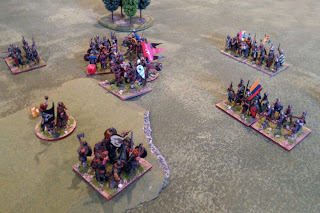 On the Viking left, Billy the Axe's boys were having a hard time of it. One unit was driven off, another cut-off and surrounded. He was holding just barely. On the right, the fight with horses was tight. Scot the Bald's men were holding on, just barely. Two units were barely holding. This flank would decide the battle. The gods seemed to smile upon them. Thor granted them the will stand. But, apparently not to fight. A miserable counter attack that could have turned to tide failed. The knights routed them. It was over. The fleeing norsemen were ridden down by remaining knights. The ravens feasted well.
As usual, "Flower of Chivalry" my ruleset of choice, provided a fun, intense, sometimes frustrating, game. It was a nail biter til the end. The Normans cav is powerful but brittle. They won with only 2 stands lost to the Viking 7. Most of the Vikings losses happened in one turn.
Posted by BaronVonJ at 8:04 AM

Scot the Gray and Scot the Bald! Love it. Nice battle report Baron.

Thank you - a great battle report and a fun read. My 10 yr old Lad loves playing Dark Ages too (OK maybe I dont play it JUST for him... )

Love the figs - I ageee, those Foundry Vikings are rather wonderful. The bulk of my Viking force are Wargames Factory plastics, but I use Foundry for my key character figs.