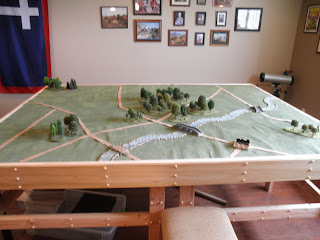 "I, Dolpheus Thewd, do hereby take pen in hand, to give a right and true account of the battle of Volgen, Unkerlant. Open war has been upon this tiny kingdom for more than a year after the death of their beloved monarch Karl Franz III. Borogravia has gained the upper hand in this conflict and has, over the winter, through shrewd negotiation and  calculated threats amassed a large army from its conquered lands.
After learning of Unkerlant through my contacts at the Geographical Society, I travelled to Greater Germania to find this illusive and barely known kingdom. I was able to "tag along" as they say, with expedition from Cavendaria, sent as allies to Zloebnia, one of Unkerlant many fractious provinces. 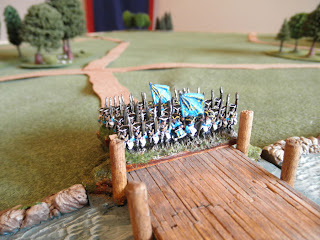 Cavendarian troops cross the Blut
A harrowing crossing through the mountains, and terrifying crossing of the river Blut we entered Zlobenia. My Cavendarian compatriots were surprised to find Zlobenia's Duke Sigmund was already on the road with his famed Ducal Horse Grenadiers, sprinting to a battle in the east. Though exhausted, we quickly followed.
I must say, Unkerlantian roads are ay best, awful. There were holes that could have swallowed a man, but we were able to reach the town of Volgen along with two regiments from Franistover, also sent to aid the Duchy of Volborg in it's last stand against Borogravia. 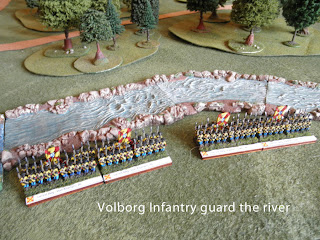 We entered Volgen at dawn, a pious town full of churches beside a dark, deep river. General Wolfe, commander of Volborg's forces ordered our regiment to guard the northern most river crossing. After passing a few "witches" trussed up in their gibbets outside of town we made for our little part of the battlefield.
Across the wide river sat flat country. A large forest dominated the center of the battlefield. Behind it, rolling forward like some great storm front, the forces of Borogravia marched forward. Their great line split at the forest with the Borogravian regular army heading towards us on the left. Our right would see a mass of Borogravian cavalry and allied forces.
The plan, as I understand it, was to hold the river and slaughter the hated Borogravians as they attempted a crossing. But then, we watched in dismay as the entire Volborgian massed cavalry of the left, galloped across the bridge to meet the enemy. 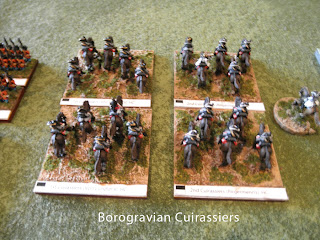 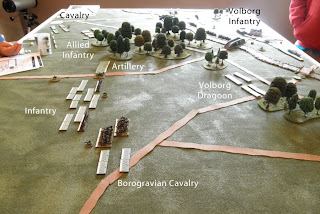 The Borogravian cavalry rode out to meet them, leaving their own infantry behind. There was a great clash! Unkerlant is poor country for horses, and so breeds poor horsemen. What Unkerlantians lack in skill they make up for in sheer bloodthirstyness. It was an ugly affair, costly to both sides, but Volborg eventually got the upper hand, and forced the Borogravian horse back. Volborg attempted to follow up their gains, but the Borogravian infantry was able to deploy and slowly push our cavalry back towards the river. 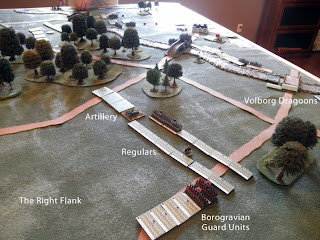 The Borogravian infantry, including all their guard units, marched steadily toward us. Our forces stood stalwart, ready to defend the river. As the sky grew dark, the Borogravian cannon deployed directly opposite our position. Cannonballs began thumping into the wet ground around us.
I was to find out later, that hardly anything had occurred on our opposite flank. It seems the Borogravian commander on the that flank had trouble motivating the allied troops. A small cavalry skirmish had occurred, but little else.
As night drew near, the battle ended. Borogravian forces withdrew during the night, to find a better crossing point. The Duchy of Volborg was safe, for now".
As is our way, the battlefield was generated randomly. It turned out very benefitial for Volborg, being the home team got to choose which side to hold. Borogravia had a slim chance at victory, which became even slimmer as our deployment was stalled by a combination of bad rolls and a brilliant move by Lead Addict in sending his cav out to meet us. My vaunted Borogravian cavalry was slaughtered, as is norm for me. 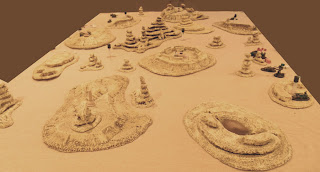 Our evening game was Robofire! Scott Pyle had added Overwatch rules for us to try, but no one ended up using it. Sorry, Scott. Two of our generals dropped out during play (my daughter fell asleep, and Lead Addict's son was sick). When enough objectives were conquered we stopped with a tie.
Good time, but we were exhausted. A good exhausted, though.
Posted by BaronVonJ at 8:53 AM

So you are telling me that giving you command of the good cavalry was not the smartest move I ever made? :)

I kill horses. It's that simple.
-J

Seriously, we need to have more infantry commanders. With the infantry you had organized into 2 brigades, we could have advanced on a wider front and manuevered the cavalry out of position. That way we don't have to make it come down to cavalry battle that we know is going to be bloody.

excellent report and pics!
The table looks great, too.

I think the rules say you take the number of units and divide by a number. I didn't do that.