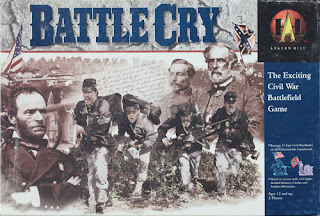 School's started and everyone's busy, but at least one Basement General (Jr. G-Man), made it out to Thursday night. We dug out and oldie but goodie, "Battle Cry!", the ACW simplified grand daddy to "Command and Colors".
We played through the provided scenarios starting with Mannassas (Bull Run to you dirty Yankees). Jr. G-Man had the Union while the Boy commanded the Rebs. Being a 9-year-old, the Boy went charging in and was quickly annihilated.
The next scenario was Pea Ridge, and I ran the Confederates as it was bed time for the kids. The Rebs outnumbered the Yanks, and thanks to poor Order Card draw, I quickly overran the Union forces. So 1 to 1.
The final deciding battle was Kernstown and the Union had the numbers this time. The Rebs held out surprising long. I surrendered the right flank and built earthworks to hold the Union tide. It was 5 victory points a piece, and the first to 6 wins. Then, in one fell swoop the Federals slammed along the front and took out 4 units in one turn. A resounding Union victory.
Great fun. Can't wait til C&C's Napoleonics come out.
Posted by BaronVonJ at 8:39 AM