with Pike and Shotte 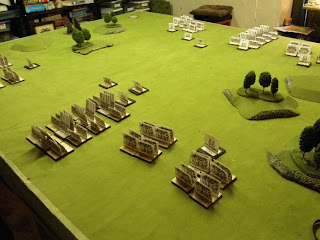 As you may know, I have a soft spot the pike and shot era. I have tons of unpainted lead for this period, but have been hesitant to paint or mount anything up, til I find "the" ruleset. I've been eyeing "Victory without Quarter" for some time, a free ruleset by Clarence Harrison. I've been following a campaign over at Lead Gardens using the rules, too.
So, when I saw some cheap printable armies the other day on TMP, I decided it was time for a playtest.
The rules are card driven, a card for every unit and commander, with commanders being able to activate units within their command radius. There are also cards for events (if you want them), reloads (there's a bonus for firing the first volley) and a Turn Over Over card to screw with your best laid plans. First off, we noticed the card sequence could cause some maneuver issues if units in the back got activated before the ones in front, which actually caused a more historical checkerboard formation. The cavalry had more cards so they seemed to move more (duh). The Turn Over card came up alot initially, but thanks to the commander cards, some units got to move. 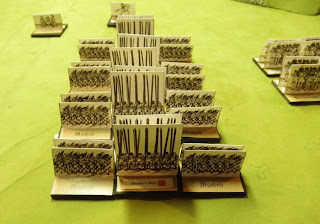 The fighting and shooting mechanics are owe a lot to Warmaster, but morale is different, with your standard "Steady/Shaken/Routed" status.
As I expected from my reading, the rules are very simple, but have a subtlety. You have to soften up your targets first before moving in for the kill. Units tended to dissolve from morale rather than combat. All things I like. And, they use a basing standard I had already settled on., 60mm x 60mm bases, 2 shot, one pike.
Over all, worth a another replay. One question came up, and while I try to contact the author, anyone who's played before, pipe in: The horse are allowed to operate in squadrons of two bases and from 2-4 squadrons to a regiment. These squadrons can double up, back to back to provide depth in melees. But, they are only allowed to provide these extra stands in the second round of combat. The problem, from reading the rules, is there is no provision for a second round of combat. Battles are fought, with the rare tie, with either one side winning and driving the other off.
Also, not sure when you can fire. Can you move and fire? or just one or the other? 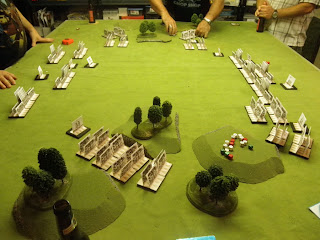 Posted by BaronVonJ at 9:00 AM

Definitely want to try these rules again. For a quick set of rules, there is quite a bit of nuance.

The Card system gave a chaotic feel to movement. This combined with the Turn Over card can really mess with your plans.

Galloping Horse must roll a morale to charge Steady Foot. This can spell the bloody end of Horse regiments, if they get stuck in shot range without charging. It really makes you think about pairing a Galloper with a Trotter for softening up a target.

Use the following link to get to the "League of Augsburg" site's "Victory Without Quarter" forum:

The "Some Games and Comments" section has links to some of the game accounts of a couple times I played it with comments from Clarence (the author) as to how he plays it.

By the way, he plays it that you can shoot any time your unit does anything.

There is also a link to download the rules and hopefully many of your questions will be answered.

Finally, it looks like I'll be playing VWQ again on the 19th.

Thanks Jeff,
just signed up, forgot the LoA guys were doing this. I have the rules, they just don't make sense about the horse still.
-J

Could you post a link to the printable figures you used please? I'd like to have a closer look, and try a few Pike and Shotte rule sets out that I've been collecting.