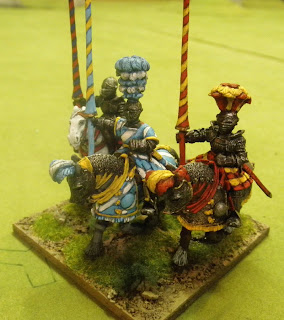 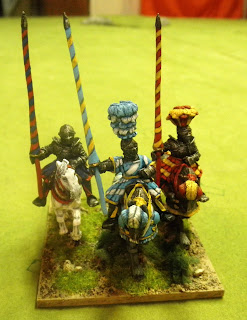 I loves me my Renaissance, but man these guys took forever. I think the results were worth it, but this is only one stand. I need 3 stands for a unit.
Second. I got two kids in sports. Between the two of them, every week night is taken up by practices, and games on the weekend. Not a whole lot of downtime that doesn't involve house work or errands. My wife, bless her, does her share of chauffeuring, so I still get gaming on Thursday.
I did, however manage to get these guys rebased: 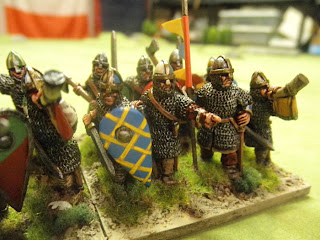 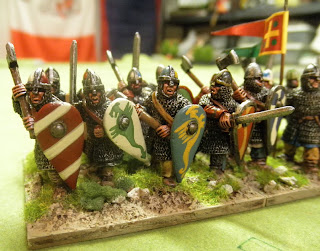 They're Crusader Normans. Nice and chunky, and a joy to paint. Only drawback is the shields have to be pinned on (which I freehanded the designs on). Now, to use my Old Glory discount to buy some Crusader Saxon opponents.
On another note, tried out "Victory Without Quarter" again. After talking with the author, we cleared up some rules. It played fairly well. Again, just like what of read of the period, the cavalry scrapped on the flank til one side was gone, then fell on the infantry in the middle which were exchanging ineffective musketry fire with each other.
Still think some of Cav rules are a bit fiddly, and way too powerful against infantry. They had those big pointy sticks for a reason. A few tweaks and we should be ready for a retest. I'm also thinking about adding some elements of  "Spanish Fury: Actions!" to add some flavor.
Posted by BaronVonJ at 8:39 AM

I love the gendarmes in particular - what make are they?

Gendarmes are Foundry. Really ahd to work on these. I think their molds are blown out. Some of detail was wearing off, or just plain gone.
Fantasy figs? If for the humans you mean, I'd just use your favorite 18th historicals. That's what I'm doing. Probably use Front Rank.
-J

The gendarmes are excellent! I know what you mean about amount of paint and prep involved. I've been doing some Colonial/character types lately and they sure paint up quickly compared to Lace Wars troops. The only thing that slows me down is I sometimes change my mind on colors once I get some paint on the minis.

Those gendarmes are beautiful.

I'm just getting into Field of Glory Renaissance, but in 15mm. Do you have any manufacturer suggestions for 15mm?

There' the old standby Essex, but I think Venexia has a more modern sculpting style:
http://www.venexiaminiatures.com/english.html
I just got FoG in the mail Saturday and have started reading. First impressions: Great look/layout, but the 180+ pages seems daunting for a ruleset. I'm a 2 page QRS guy myself.
-J