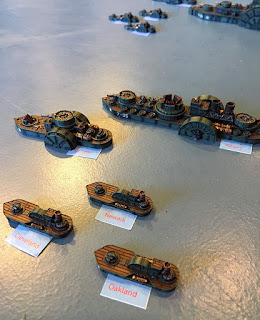 I'm sure it's a common wargamer problem. You invested in a line of miniatures or period because they look cool, get about half done and quit either because the rules suck, there's not much interest anymore, or the company producing them gives up or goes under. I had the trifecta with Dystopian Wars.
I bought each of the starter sets: British, Prussian, Japanese and American sets of really cool steampunk ships. I got the Brits done and started on the German. Here's where my complete lack of love for naval games started kicking in in. Love the minis, hate to paint them, and for the most part, don't really like naval games.
About that time, Spartan Games went under. No more toys. I would have helped them out by dumping massive amounts of cash their way on the their Dystopian Legions minis, if they hadn't and gone and made them 35mm! Completely out of scale with my other VSF stuff.
Jump ahead a few years and I find out a fellow Basement General had also heavily invested in DW. His collection was bigger and better painted. Next obstacle: the rules, in my humble opinion, suck.
No problem. The venerable spaceship rules, Full Thrust came to the rescue. I've been playing them for years and adapted them to flying ships. It was easy to switch up a few thing for battles on the Dystopian Seas. 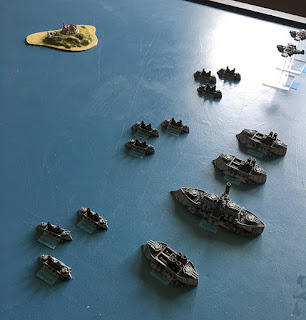 The Brits: A Battleship, 3 frigates, 3 escorts and a couple of bombers. 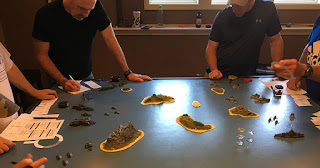 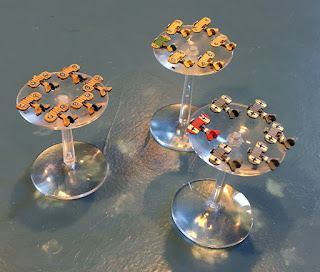 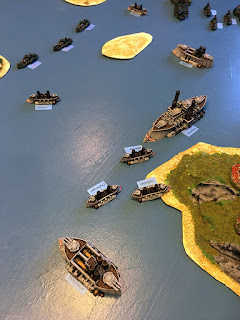 Poor plotting leaves a ship aground. 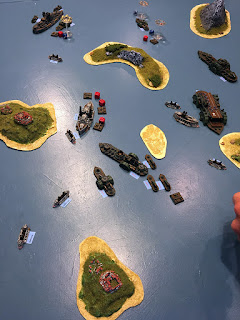 This battle would see a new Revolutionary War between my British fleet (with some Hessian allies) and Other Jay's American forces.
The rules worked great. Pre-plotting moves proved a headscratcher for some. They ran aground, slammed into their own ships. The little ships died heroically while the massive capital ships blasted away at each other. The fighters and bombers proved either a nuisance at best, or a killer.
It ended with a minor American victory and me eager to paint more. Until I realize again, I hate painting ships.
Posted by BaronVonJ at 9:17 AM

Ha - totally agree on the whole "buying lots of figures then losing interest" piece! Happened to me more than once, coincidentally happened with DW but I sold my Covenant ships on after playing a game or two.... plenty more I never got around to selling though mind you.

I gotta say that going with 35mm for Dystopian Legions was an incredibly bad idea. I, too, would have bought hundreds of dollars of some of those minis in 25/28mm. But 35mm? Deal breaker.