Campaign for Kingdom Battle #2: The Beatdown 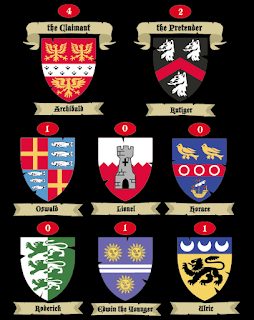 Duke Archibald, fresh from his last victory, took the field along with three allies against Horace, the Pretender, and his three traitorous friends. 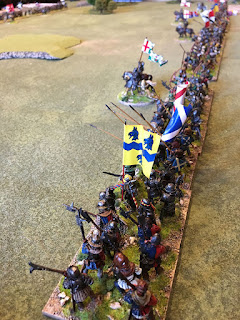 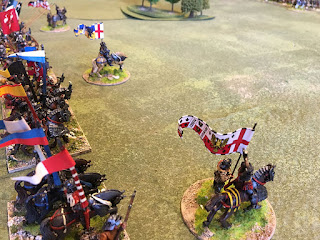 The opening moves saw the various lords trying to keep their battle lines in formation, but as usual, a few broke ranks in spontaneous charges.
When the forces met, real pounding began on the flanks. In one turn, Sir Roderick lost four of 6 units to Ulric. 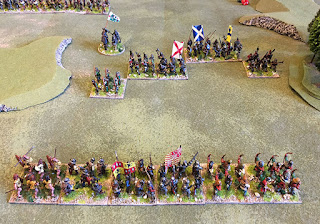 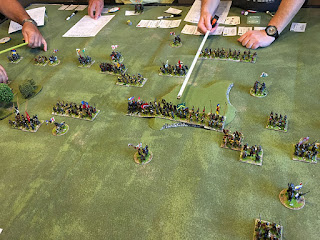 For whatever reason, poor pay, tribal loyalties, the pikemen on both sides never got in a lick. They all left after a few hits or arrows. The flanks quickly caved. By the time Horace got his troops in the center to fight, it was over. Half his army was gone,
After the usual executions and promotions, Archibald was feeling pretty good about his chances. Little did he know Sir Rutiger, his trusted lieutenant on the left flank, was already plotting his demise....
Posted by BaronVonJ at 10:00 AM

Cool. What rules are you using for the tactical battles, and are the campaign rules of your own devising?

You can dig through the "Campaign" tab on the right, but here's a link:
http://baronvonj.blogspot.com/2011/05/campaign-for-kingdom-how-to.html

I do like the way you do this sort of thing! Sounds like a lot of fun for all involved and I bet there was plenty of pythonesque amusement along the way too.

Just a question, what is the size of the stands?

60x60mm I think. But you can use whatever. The original rules use 6 stands of 15mm troops. I just made one where you track casualties.
I'm planning a massive rewrite and release of them. I think mine will different enough from the old rules.

Thanks, I am planning to make something similar, so the release of the rules will be welcome.

I will stay tuned

Well, what is about these rules? Nothing new?