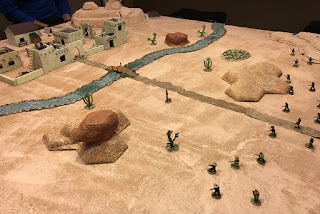 Last night was a playtest of the first scenario in my upcoming Mexican Revolution supplement for Fistful of Lead. I'm taking a different approach and following the actual timeline of the war. Each scenario is a "zoomed in" part of the battlefield. 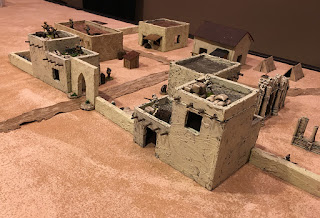 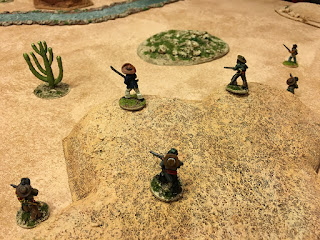 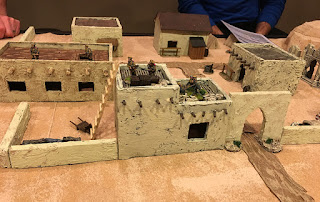 Early War Brits stand in for the Federales.
The first scenario covers the battle of Casas Grande. 800 Revolutionaries (Maderistas) without heavy weapons attack 500 Federales with Machine guns and artillery. I tried to keep the ratios similar.
The Rebels have to cover the dead ground quickly to void getting cut down by the MGs and shelling.
They benefitted greatly from the apparent shoddy ammo used by the Federales (Steve rolled an appalling number of 1s). But, Federal reinforcements showed up on lucky roll on turn 2. 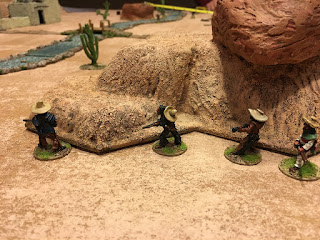 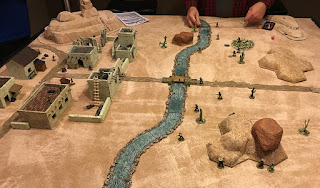 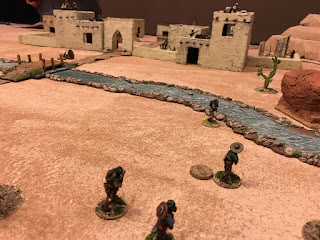 Several Rebels made into to town and actually took out the machinegun, but they, like their historical counterparts lost. 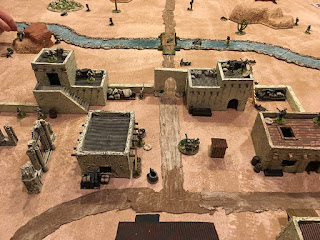 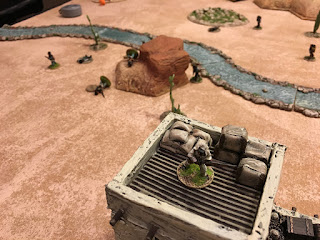 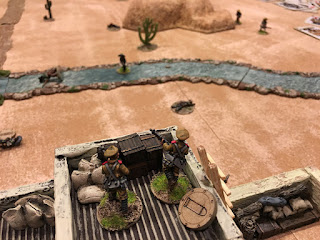 I felt pretty good about the game. If the reinforcements had showed later, it might have been a different outcome.
Posted by BaronVonJ at 1:20 PM

Excellent. I'm really looking forward to these rules being published.

If you have the FfoL rules your set already. This is really just scenarios with some extras like machine guns and artillery.

This was a terrific scenario Jaye. Even tho we got crushed it was a hoot. I wonder if there should be a graduated scale of victory points? Remember when Reese and I finally got somebody to the effing wall and we were giving each other high fives? That moment alone was probably worth a million! You keep thinking them up and I will happily play-test.

The one thing that might need an adjustment is the size of the artillery burst. Even in open order there were too many chances to hit multiple figures. I don't know anything about the blast radius of artillery of that period but that template was large. My 2 cents

How cool! I'm already playing Mexican Revolution with FfoL, very much looking forward to the supplement!