I've been wanting to try out The Men Who Would Be Kings ever since I bought them. I've been a fan of all of Dan Mersey's rules, and even though I'm not a colonial gamer per se (I love VSF), I had to try them some how.
Enter last week's game and the utter failure of the Royal Society to stop the Undead horde. I don't have any Zulus, but between me and Brett, I have a lot of Zeds. Why not just use the Zulu stats? 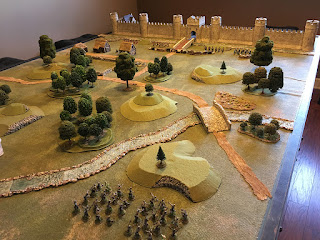 The mission for the British was to hold the last line of defense, and protect the the road to London and the famous Graveston Wall built in 1807 to keep out the Revenant menace.
The object for the Undead was to cross the river and exit the board. 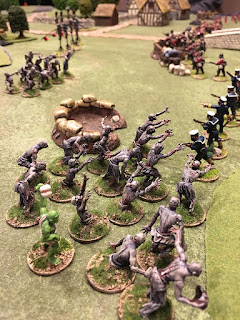 Though wave after wave threw themselves at the Redcoats, the firepower proved too much. It didn't help old Uncle Zed that the random qualities rolled up for the Officers proved a huge benefit. No laggards here! 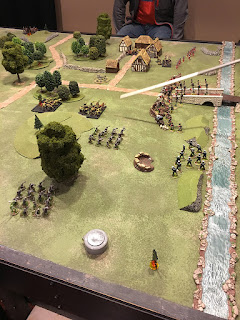 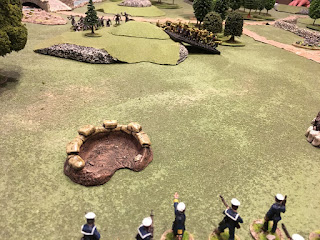 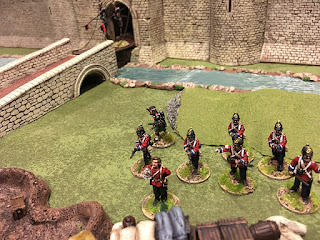 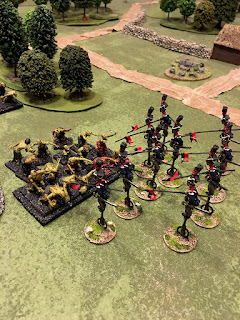 The Cavalry, in this case unicycles because horses are too easily spooked by the zombies, proved overwhelming. They took at two groups single-handedly before being dropped to one lone peddler.
Did it work? Yes and no. Yes, it was fun. The zombies had a 2-1 advantage points-wise, but it probably should have been 4-1. As suggested by Mr Mersey, we used the recycling rules in the "Playing Mr Babbage" section. It allowed for 3 new units to enter, but that wasn't enough. Rifle fire was too much.
We kept the pinning rules. I explained it as the dead being so shot up, they needed a chance to reform and climb over their "dead" buddies. Without the pin rules, the zombies would have rolled right over the Redcoats.
This was a last minute game I threw together with more enthusiasm then sense. We're going to try a "proper" game soon with Britsh vs Pathans.
Posted by BaronVonJ at 1:52 PM

When games look that great and that fun they are 'proper' games.