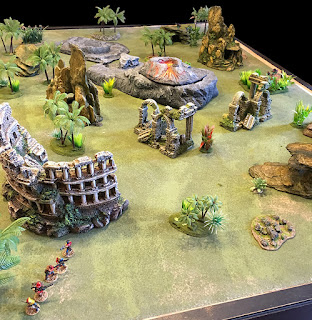 I am blessed with a large and diverse game group; newbies, grognards and everything in between. I thought I would document some of the process and progress of Wasteland warriors.
There are a lot of great Post Apocalyptic rules out there, but as I've mentioned it before, Wasteland Warriors will be be different in several ways. It uses the tried and true Fistful of Lead system as well as it's methodology. This is not the dark, gritty world of Book of Eli, or the Road, or even Mad Max.

You can definitely use these rules if that's your vision of the future, but you'll leave a lot of fun by the wayside.
In a wargaming world full of gritty, dark post apocalyptic rules I present a weirder, and somewhat goofy take on the end of the world, shaped by hours watching Thundarr the Barabrian, reading Kamandi Last Boy on Earth, and playing Gamma World.

It is a world populated by talking plants, machine gun toting giant squirrels, killer robots and techno-necromancers. Strap on your blaster, take your anti-radiation pills, and hop on your giant grasshopper mount. Things are going to get interesting.... 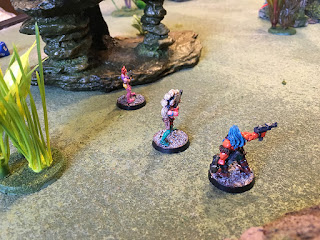 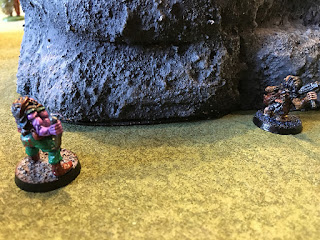 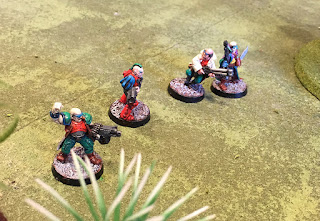 Last night's game was play testing the basic turn sequence. If you are familiar with Fistful of Lead (and I hope you are), it uses regular playing cards as the turn sequence. IN the original Wild West rules, some of the cards had additional Special features available to models activated by them, such as One-Eyed Jacks giving a bonus to Shooting rolls. For WW, every card has a special feature you can use them for. This makes decisions about which model to activate when even tougher.

This was also a playtest of the scavenging rules. Each player (this time there were 6) placed a scavenge marker showing the location of possible food, goods, weapons or lost tech (represented by the card suits: hearts, diamonds, spades and clubs). Face cards are dangers. As usual, you can use regular deck of playing cards with a chart to show what you got, or, of course, I'll offer specialty decks. Then, they diced for entry point. That scavenge marker you placed might be across the table now. 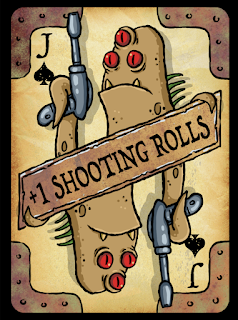 I don't have a lot of ruins just yet, so this battle took place in what was decided was an old swim park that happens to have an active volcano in it. A lot of weird stuff happens when a comet hurtles between the earth and the moon, unleashing cosmic destruction.....

The game started with Orange Crush and his Deadly Darlings headed straight for a marker while while the SIN-thetics (an android gang) took long range shots at them. The next turn, Orange and his gals fired back, but robots and androids ignore pin results, having no sense of self preservation. They flip side of that bonus is they are easier to hit for the same reason. 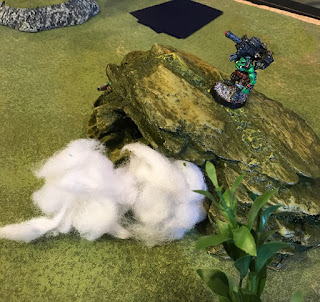 One the other side of the board, a group of shotgun armed green skinned mutants found a cave with a scavenge marker. They were the first flip a card and see what it was. BOOM! a booby trap. Three mutants were caught in the blast, but only one injured.

Next, and mixed mutant and mutated animal gang climbed the volcano to grab their own loot and lucked out with some food. The two other, mostly human gangs managed to avoid most of the gunfire streaking across the table.

Some well used uses of the Special abilities of the cards helped players recover from wounds and pins, close combat and shooting. Soon, everybody had a least some scavenged goods. All items scavenged have a trade value associated with them which is essential for feeding and maintaining your gang between outings. These can also be used to increase you Renown and help eventually win the campaign.

One outcome of the playtest is that "Out of Action" models can be looted. This added an unexpected element to the game. Now your downed gang members become objectives to grabbed before the enemy. This helped get rid of the hunker down mentality that dominated earlier sessions. 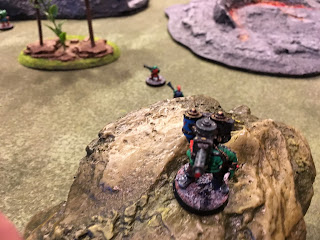 All in all, things worked great. Orange Crush and his crew, and the androids were wiped out. Scrat the Rat and his gang grabbed what they could and beat it. One of the human gangs made off with a coveted luxury food item (Twinkies).

We got to try out some of the new skills like Two Gun Terror, and weapons like the B.A.G. (Big ass gun).

Next game will introduce mutations and more lost tech of the Ancients. 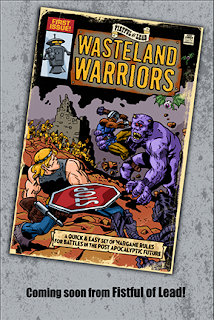 I am very much looking forward to these rules!!!

Looks and sounds magnificent, and I love the card design. Count me in!

Two questions: when are the rules likely to be released and how long is the average game? I am putting together a campaign in the autumn and need a quick and dirty skirmish between Sime post apocalyptic road races.