Getting caught up with BP and acquainted with SW Armada 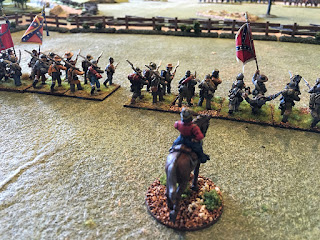 I'm helping run a game of Black Powder with Cluck Amok at Warlord Con next month, and I thought I needed few more games under my belt. Using John's terrain and soldiers we set up a rare Saturday game using the Black Powder ammendments for ACW (Except the "Whipped" rules which I don't see a difference with existing rules). 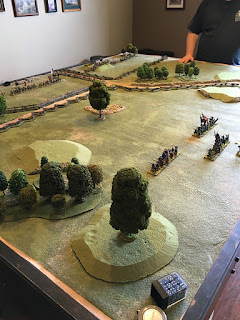 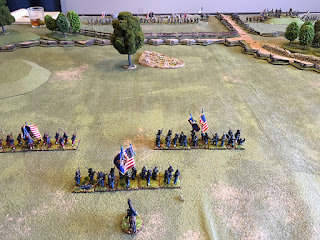 I was small game by most wargaming standards, but I gotta say, it was a lot of fun. Some of the best games I've played have been with fewer units, but come game time it's hard to resist the pull of throwing it all on the table.
We each had three infantry units and a pool of two guns. This would mean brigades getting knocked out as soon as two of those three were shaken or destroyed. Management of a unit's hits would be paramount. 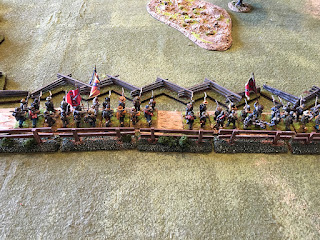 I managed to get my Rebs safely behind a wall, but some nice die rolls and concentrated fire by Lead Addict had one of my regiments beat up off the bat. It took efforts most of the game by both the Brigade Commander and the Big Boss to hold them together.
There was a nice back a forth to the game that reminded me of my first ACW love, Fire & Fury. But seeing as we didn't have 6 hours to play, F&F would have to wait. The new rules that only allow firing it you move once gave a more period feel.
We ended up with destroyed brigades on both sides, and one reb unit so banged up it couldn't finish off the Yankees. A slight victory for the Union. 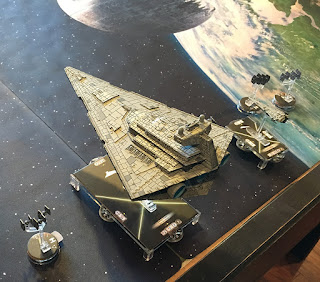 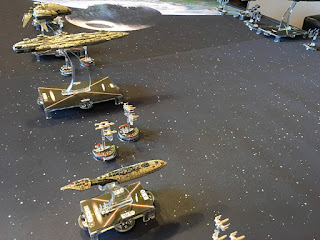 Last night we tried Star Wars Armada, the big brother to X-Wing (or Wings of War in space). A lot to keep track of, but not a hard game. Yes, it has the Space Opera feel more than SciFi. It feels more like a sea ship battle in space but that's OK. If I had known the ships better, I might not have lost the biggest, baddest ship on the board so quickly. This is definitely a "know your troops" type of game where repeated plays with the same ships comes in handy. That's not my thing. e rarely play back to back games of anything. 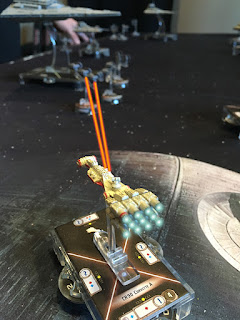 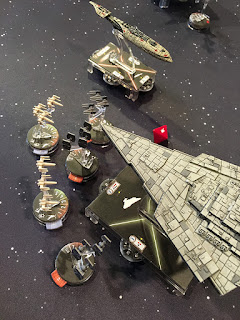 I would also say 4 players was pushing the max. You might be able to play 6, if everyone just had one ship. As I mentioned before, there's a lot to manage.
The ships are of course, beautiful. I was seven when Star Wars came out and it changed my life. I am what I am (an artist and geek) because of it. That being said, I have a hard time playing games set in that universe, or Tolkien's for the same reason. It's too close. I can't fly the Millineum Falcon or play Darth Vader. Han didn't die in that battle, Darth didn't fly that type of TIE fighter.
To me it's like having an a-historical ACW game where General Lee is leading a cavalry charge. I can play as anonymous pilot A, it for mythical Squadron B. That's about it.
Other than that. great game.
Posted by BaronVonJ at 9:43 AM

I was a senior in high school when Star Wars came out and I saw it 4 times that first week - at the old Glenwood Theatre! I was amazed by it then. . .

Glad to see you brushing up on Black Powder as I'm gonna need the Games Mastering help. Thrilled to have you on board. The van has been rented ; )