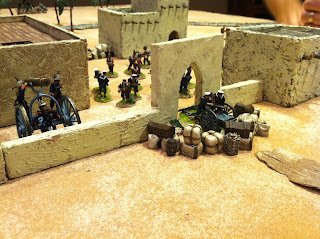 "Bring me the head of Sir Percival Armstrong".
With that simple command from the sultan, the sword wielding forces of Derkaderka charged the British walls. 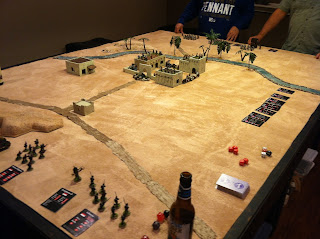 as if a horde of sword swinging fanatics wasn't enough, the other side of the battlefield presented a whole new set of difficulties for British. A German assault force had landed via airship a few miles away and was entering the fray in hopes of capturing Professor Standpipe and his newly acquired alien artifact found in the desert a few days ago. 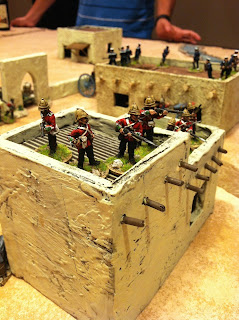 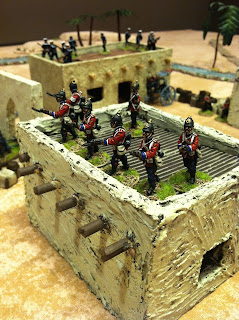 With the modern forces of the German Empire on one side, and the fanatic hordes of the Sultan of Derkaderka on the other, it looked grim for the stalwart defenders in their small dusty village.
For this scenario, the British, outnumbered 2-1 had to either break the attackers or get both Sir Percival Armstrong (Gentleman adventurer) and Professor Standpipe off a defended table edge.
The Tribesman had to kill or capture Armstrong, while the Germans wanted the professor alive. 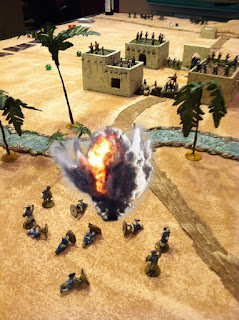 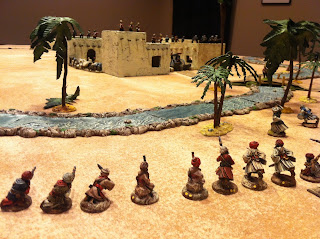 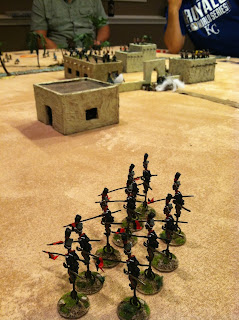 It started with a mad charge by the Derkaderkastanees. A shot from the British Tricycle artillery rocket destroyed most of the tribesmen in one lucky shot.
As the redcoats shouted a loud "hurrah!" the Sultan's steamtank swept the parapet with gatling fire, driving the British from the walls.
Thus it went. Mad charges across open terrain, horrible casualties, and then bombardment from the attacker's guns.
The Unicycle Uhlans managed to cross the bloodied terrain unscathed, making a mad charge at the British guns. They slaughtered the crew and were in the midst of scaling the walls (pretty tough with lances and unicycles) when the Naval landing party blasted them to bits from the village rooftops. 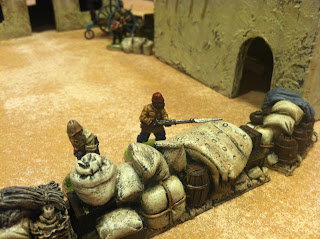 Throw in the deadly sniping by Sir Percival's manservant Mpopo and the at last the attackers quit the field.
It was a close run thing, and a lot of fun.
Posted by BaronVonJ at 11:55 AM

Looks great and sounds like it was a fun game!

The Unicycle Uhlans! My favorite unit! Looks like it was a fun game.

Figures and terrain are wonderful...as this report!