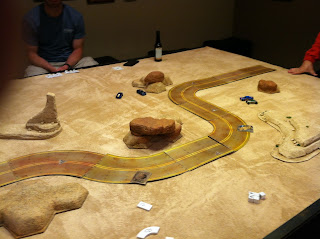 To me, finding those perfect Mad Max style, road warrior rules has been a white whale. Car Wars is too complicated. Axles and Alloys doesn't do it for me. Dark Future was over as soon as your car left the pavement. Outlander takes for-ever and has some design flaws.
I was lucky enough to get in on the play testing of Gaslands (don't like the name, but whatever) an upcoming Osprey title. It has bits and pieces from other games, but overall unique in it's design.
I didn't post many pics because I haven't painted up any cool Hot Wheels conversions, and I didn't want to give too much away about the mechanics.
We ran an ambush along the hiway scenario where 2 players had to get off the opposite end of the board. Lying in wait were the other players.
The cars were vanilla, packing MGs and dropped ordinance and essentially the same.
It ran great. ambush-ees almost made it.
The mechanics are simple. It uses templates for moevment, but not enough they are restrictive. The special skid dice are a nice idea.
There are some flaws, however:
- Physics are kinda out the window in some cases like collisions.
- Going 100mph on anything but a nicely paved road would be suicide in the real world.
- the building mechanism for vehicles needs some work.
Other than that, a nice start. The author has a sheet for submitting playtest suggestions and I have done so. Lets see where this goes.
Posted by BaronVonJ at 10:11 AM

Hoping to try the rules out soon at my local club.

Nice terrain by the way.

Time to give Buggies Bikes and Trikes a test drive, methinks.