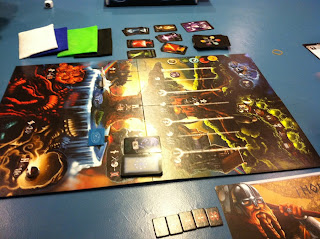 After RECRUITS and with a constant crazy schedule I thought it best to take it easy with some boardgames.
First we played Yggdrasil. It's a cooperative game where you become one of the Norse gods trying to stop Ragnarok. Players try to keep the forces of evil from crossing the board. Each time a card is drawn, the baddies like Surt and Loki advance. The game ends when too many cross and you lose (most often) or the cards run out.
Each god has a special power. As Thor, my job was to pummel the bad guys and giants. We almost won. It literally came down to the last card. Great game. Highly recommended.
Then, for a quickie we played a purely dice game called Las Vegas. A lot of fun. Could see it at parties.
Posted by BaronVonJ at 8:18 AM

I recall a similar themed game from many years ago, that came in a simple plastic clamshell blister pack, with paper fold out 'board' and card tokens. It was a lot of fun and I played it over and over. I think it was called Ragnarok... great stuff and got me hooked on Norse mythology all those years ago...

Glad you liked Yggdrasil. We haven't beaten that game yet, but that was the closest we have been. Maybe next time!