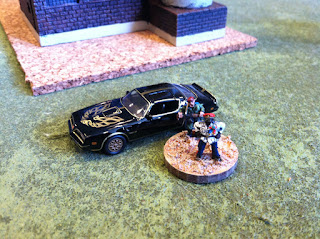 Saturday was a playtest. Greg & Zombie J brought over their troops, and together with the ones I painted 15 years ago, but have never seen battle we tried a stripped down version Tomorrow's War.
Greg and I took the forces of President for Life Mdonga, while J and his precious boy soldiers attacked trying to capture him while he visited his mistress. 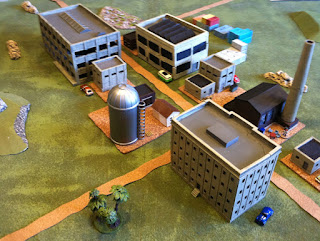 By stripped down down version of the rules I mean we took out a lot of the seemingly endless counter TW has. I don't really need to know a guy is lightly wounded, is he combat effective or not? We also used whole stands instead of single minis. 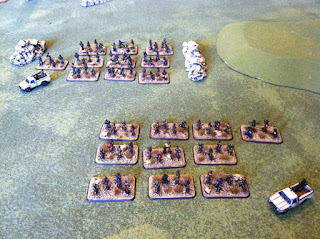 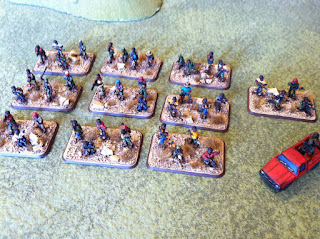 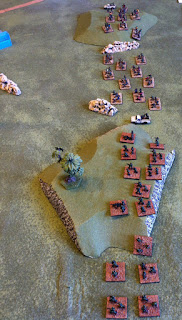 Presidential forces won initiative and I immediately rolled up the only heavy on the board, a Panhard armored vehicle packing a 105. Sounds good, but not as effective as an antipersonnel weapon. I caused a few casualties, but as we soon learned, at the end of the turn you roll of the see if casualties are really casualties. It became really tough to kill. (Rule fix #1, no medic rolls except for Elites).
TW uses an Action/Reaction roll. So, when my militia tried to crest a hill, they were reacted to by J's Regulars and fired upon. Back over the hill boys. They did this twice.
Meanwhile my Elites  (presidential Guard) were able to secure the building across from the President. It was too late, the boys got him. We'd spend the rest of the game in house to house street fighting. 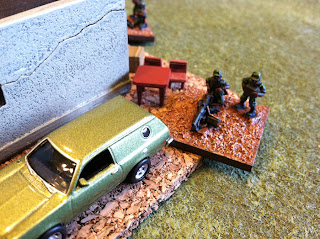 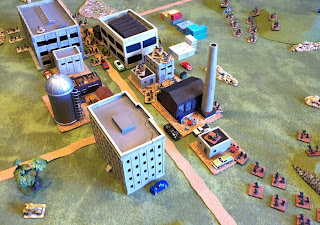 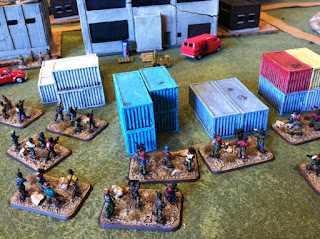 The Boys in the Hood
Over all, I like the mechanics and understand why this=this. I seems to give a pretty good representation of modern warfare (not being a soldier of any kind). But, is it right for our big group. Maybe not. The Action/Reaction mechanic might throw some off. And we always have to balance, "can we get this done in 3 hours?"
I may have to start enforcing the "games begin at 6pm" rule again.
We are still going to try a few other sets to find the right fit.
Posted by BaronVonJ at 8:36 AM

Those Gregs buildings and such?

I do too. But can it handle 8 players at once?
Greg buildings, yep.

Great to see the Bandit's TransAM ;-)

From the looks of the way you have based it up, would not a modified version of Flames of War not work for you?

I realise its not to everyones tastes, but it could well work?

If you're toting around AK47s (assault rifles: 8" range and ROF 3 on the move), and rating troops as trained, your going to get some quick and bloody games, close up!

Some of the buildings are mine, the rest are Greg's. I brought the cars, we have enough for a used car lot between Greg and myself. I like the rules, but am not sure if it will work with the group/time frame.