A storm of arrows- Campaign for the Kingdom 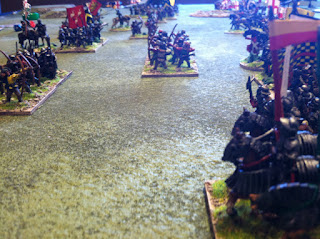 Last night we continued our Campaign for the Kingdom. Duke Ulric of Kragg, the Claimant to the throne, had finally cornered the wily Horace, Duke of Dunharrow. They met on a mostly open field, marred by a small area of broken ground.
Both forces moved slowly toward each at first. But, then as it always happens, a spooked horse, or a misheard shout triggered sporatic charging. The trim lines broke apart. Units became separated. The slow foot knights and pikes left behind. 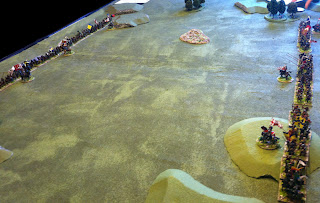 The forces face each other 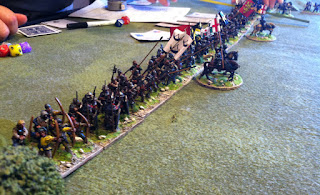 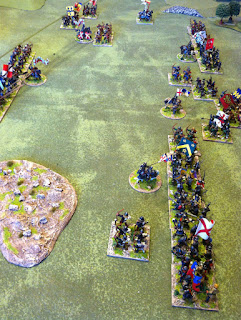 Once the lines got close, the arrows were loosed. Let me stop here. In Flower of Chivalry, the system we have used for years, two things have been constant:
1) Even if one side takes the lead, the other side always catches up and we have a very close game. Most games decided by one or two units loss.
2) Bows are good at softening up the enemy. They usually get 1 at most 2, shots before having to dive into the melee where they usually get the worst of it. Bows are not battle deciders.
This was not the case last night.
The forces of Duke Horace completely rolled over Ulric's. I mean, it wasn't even close. Ulric lost half his forces, 9 units, to Horace's 2. Chief killers were the bows. They either drove off the enemy, in the case of Baron Lionel holding the left of Horace's line, his bows drove two enemy units completely off the field (which almost never happens) and killed 2 others. One in melee.
The aftermath was predictable. Ulric, defeated, was brought before Horace, who promptly had Ulric's head. 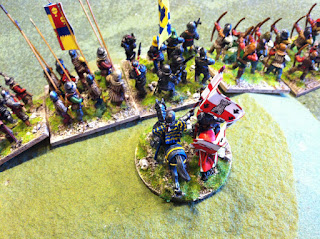 Lionel cheers his men forward.
Duke Horace was now Claimant to the throne. Lionel, Baron of Stonekeep had been publicly chastised by Horace for suffering the only losses of the day. His valiant archers. An angry Lionel returned to Stonekeep, there to plot his revenge..... 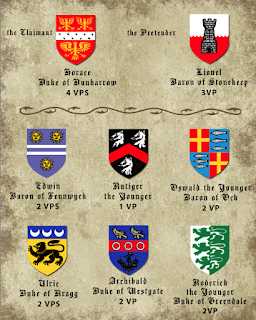 The game was over so quick (hour and a half) it was still daylight out, so we played a game of "Popular Front", a great little boardgame of the Spanish Civil War. Highly recommended. 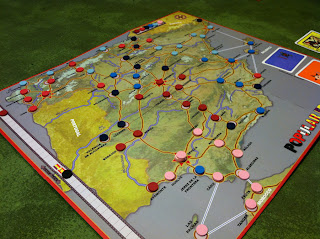 Posted by BaronVonJ at 7:30 AM

Love the Heraldry. I need to go back and look at the campaign, I think I like the whole idea.

Pay special attention to how we did it. Under "labels" you can click "Campaign". Make sure to keep hitting oler posts to get the whole deal.
-J

That was indeed brutal last night, your archers eliminated my pikes in one volley! Flowers and Chivalry is a tremendous rule set, it could be used for some of the fantasy battles also. An option for Hail Caesar Fantasy

A real "slobberknocker" as Pappy would say.

Great game, nice to see the true King's son to get a victory point.