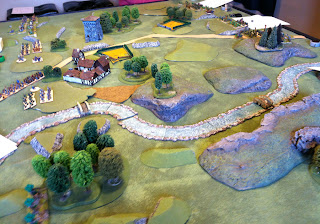 Night 2 of Basement-Com saw the clash of two fantasy armies. The Empire teamed up with the elves to take on an Orc horde (is there any other kind?) using Hail Caesar. The game and minis were provided by Lead Addict, who I think used every piece of terrain I own to simulate the foothills being fought over.
We had a core set of units we had to use, but could then add from a pool to a max of 20 units a side. As the elves, I decided to go heavy into cav and shooties, while the Empire loaded up the bang-bangs.
I stacked the horse on the left flank and did what I do best, CHARGE! We smacked into Minotaurs and Trolls and despite the monsters being "Big" managed to drive them off, then in a second charge route them. We units were blown, but light cavalry riding in reserve filled the gap. This little skirmish showed the importance of supports. 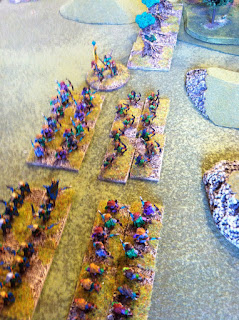 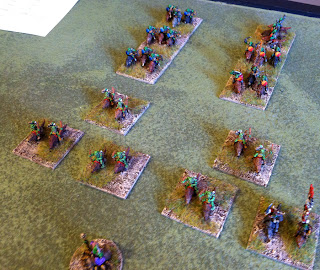 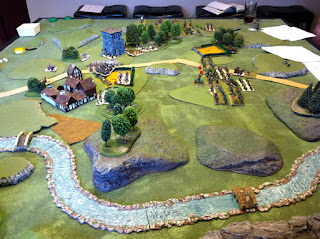 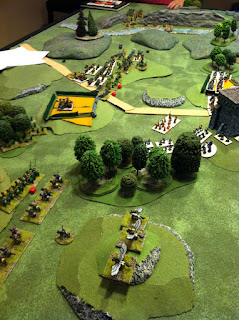 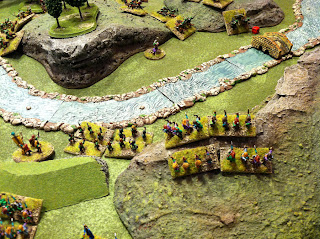 Meanwhile in the center, the Imperials were getting slammed. They were just barely holding the farmstead and the tower, the objectives of the game. Due to poor initial placement by me, I wasn't able to support being across a wide river.
The center finally broke and fell back. The farmhouse was close to falling, but from across the river came the Treants. Like a scene out of the Two Towers, they smashed into the goblinoid lines. These casualties caused the orcs in the center to break. It was over.
Great game. Hail Caesar is perfect for Fantasy. 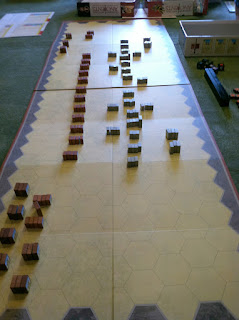 Speaking of Caesar, Saturday afternoon was spent playing Commands and Colors ancients. I have played C&C many times at our local con using the lovely mini collection from Cluck Amok, but never played withe the blocks in my own home.
The Romans faced the Carthaginians in the battle right after Cannae. Carthage was trying the old Double Envelopment again, but the Romans were ready this time. It looked like an easy Roman victory, but just like every C&C game I've played, it came down to wire with one unit a side deciding the outcome. Carthaginian victory!
It was a good weekend. Although my beer horde has seen better days.

Posted by BaronVonJ at 7:51 AM

And worry not . . . beer hordes can be (and should be) replenished.