Franistover's Irish Guards
As every good Unkerlanter knows, the roads in Franistover are terrible. So it was no surprise when good Prince Adalbert raised taxes to help pay for said roads. It was, however, a surprise to the citizens of Boscheberg when their beloved  Schlossenslopp beer got the brunt of the taxation. The town mayor refused to pay, and in an act of near insanity appealed to Franistover's age old rival, Zlobenia for help. A fight was on. 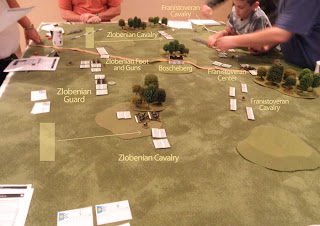 Both forces arrived in late morning (probably because of the state of the aforementioned roads). The Zlobenian center was taking time deploy. Meanwhile, on the Zlob flanks, the cavalry took advantage of open terrain to fly foward. Zlobenia being hilly country, rarely affords a horseman such luxury as open terrain.
On the other side, Franistover forces were also taking their time. Indeed, it was early afternoon before ineffectual cannonade was exchanged. The citizens of Boscheberg lined the walls to watch.
As the Zlobenian cavalry on the right, thundered across the valley, led by the vaunted Ducal Horse Grenadiers in their shining gold breastplates, they spotted the Franistoveran horse still deploying. Now was the chance! But, the Zlobs miscalcualted, and the Franies counter-charged. The Ducal Horse were scattered
and beaten. 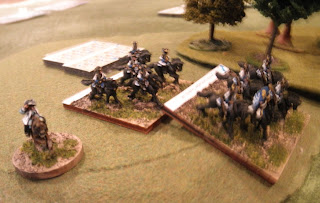 The Ducal Horse Grenadiers charge to their doom.
In the center, the Zlobenian cannon was taking a toll on the Franistoveran infantry, but the Guard were still lagging. The Scots Guard has stopped for lunch, it seems.
With the afternoon wearing on, the Zlobenian cavalry on the far left finally came to grips with the Franistoveran horse. They met the same fate as their broters on the opposite end of the field.
The people of Boscheberg, mesmerized by the battle at their doorstep, had forgotten to lock their gates. The Franistoveran grenaiders occupied the streets and houses and seized the brewery. They lined the walls troops and began reigning fire down on the approaching Zlob infantry.
Night, mercifully fell, and the Zlobenians quickly fell back across the border.
Prince Adalbert enjyoed a lovely dinner in the town square, accompanied by a tall mug of Schlossenslopp and the hanging body of the mayor.

We used Might and Reason again, as it is a flawless, fun system that let us play a fairly large game in a short time. As all my miniatures are not done, a careful observer will notice the use of foamcore stand in:

It is everything I can do, not to do switch from 10mm ( doable scale for this campaign) to 28mm which is soooo pretty.
Once everybody gets a firm grip on the rules, we will continue our Unkerlant campaign started a while back. Stay tuned.
Posted by BaronVonJ at 8:13 AM

Ahhh, and who said meself was an old softy that had become addlepated in his dotage?

How dare that Mayor enlist aid from the stinking Zlobs! A very sweet meal it was, a cool breeze, a hearty brew or three, and the lovely sight of the Mayor stretching on the gibbet.

A rousing three huzzays for this return to the fierce(?) struggle for Unkerlant! I look forward to further updates with a glass of fine wine, cheese to nibble upon, and a scented handkerchief to waft away the blood of those unsightly peasants!

I have nominated you for a Stylish Blogger Award!