Last night was another Super System game, this time with a lot of kid players, and you know what that means? Chaos. They rarely do what you think they're gonna do, or should do.  Which equals FUN. 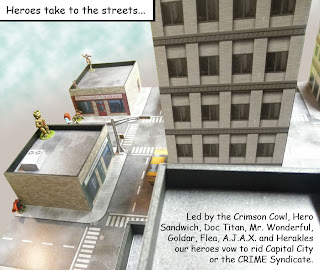 The kids (and one adult) were on one side running the Heroes. They moved very cautiously through the city, hugging buildings. Not very heroic. 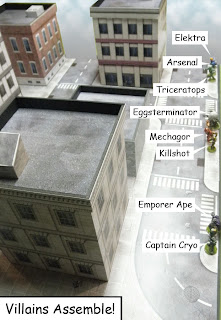 The villains, on the other hand, were more aggressive, taking to the sky and rooftops. 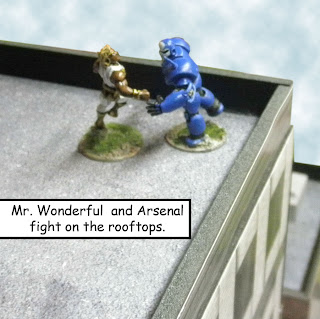 The heroes had a few early victories, stunning villains with mental attacks and hyper-moves. 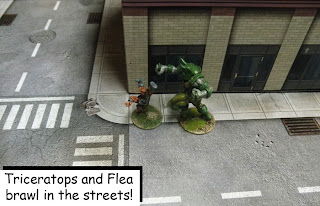 But, in the end, the bad guys began to grind down the heroes. Captain Cryo froze several, Mechagor slammed the Cowl through a building, and Flea was gunned down by Killshot. 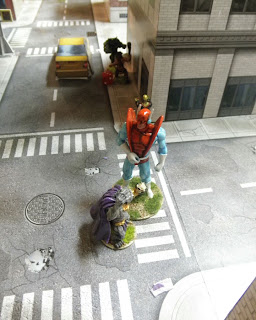 Doc Titan faces Emperor Ape
As, usual SS provides a great game. The mechanics make it easy to grasp, and the powers make it fun.
Posted by BaronVonJ at 8:03 AM

What buildings are you using?

They're downloadable from Fat Dragon, I believe. But, I've modified/recolored/etc. I've also backed them on foamcore for durability. See some more on the earlier "Supers" posts.
-J

If it is any help, Twilight street (Microtactix?) do 2-3 free building downloads if you want increased variety.

On the report - I always like checking in on your supers games Baron.

Thanks. I was able to take most of the files into Photoshop and make a variety. Also have a few texture files to give the buildings different facades.
The Fat Dragon stuff was nice because the pdfs have layers you can shut on and off. Cracks, no cracks. Dirt or no dirt, etc.