Hurn has at its head, the only prince (in this case princess) not of the royal bloodline. The Principality of Hurn was annexed during the First War of Unkerlantian Succession. Neither side has been particularly happy about the arrangement since. Hurn is currently governed by redoubtable Princess Lucrezia Saxe-Golgoth Von Hurn. She has outlived three of her husbands and all but three of her seven sons, all of which died in the fratricidal ritual that is Hurnish royal succession. The old matriarch is currently being courted by a much younger Ruprect of Borogravia, which only furthers the belief by most Unkerlanters that Hurn is full of traitors.
The one thing Unkerlanters do like, however, are Hurnish turnips. These turnips became popular during the potato famine of 1688, and Unkerlanters have cherished them ever since. Most are grown outside the town of Carroburg in the north and shipped throughout the kingdom.
Alsdorf is the provincial capital and famous mostly as the home of the current Kannonball champions. This is troubling for most Unkerlanters because not only is the title held by outsiders, but many believe they won by cheating. There are allegations of spiking the opponent’s ale and greasing the cannonball.
The Principality’s troops are not considered reliable or aggressive unless they’re facing other Unkerlanters. 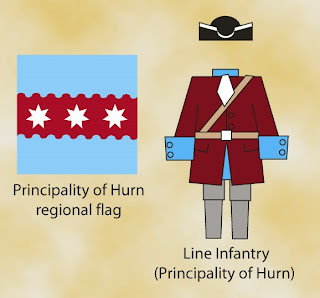 Posted by BaronVonJ at 1:26 PM

Btw you forgot to 'label' this post: not a problem for those who enjoy 'in real time' the discovery of Unkerlant, but future visitots would miss Hurn.