Our Boys in Butternut 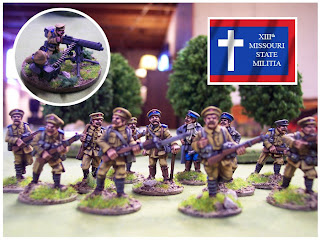 Inspired by the wave of activity over at the Lead Adventure Forum over a fictional 1938 British Civil War, I delved into something I've been toying a with, some ground based skirmishes set in the Crimson Skies universe. Crimson Skies is an aerial combat game with a great background set in the "what if the Great Depression caused the U.S. to break apart?".
Presented is the 13th Missouri State Militia. Unlike the Dixie Regulars clad in traditional gray, the state militia wear uniforms of the old butternut variety, as an homage to the waning days of the Confederacy. The blue shoulder tabs identify them as infantry and they carry a variation of the original Missouri battle flag. This picture was taken while on maneuvers in the Ozarks.
(Yes, the front rankers are blurry, but I'm too lazy to take another).
Posted by BaronVonJ at 7:52 AM

Like them bunches. I assume its the Arkansas, Missouri, Kansas, Oklahoma, Texas stuff.

Kansas? Hell no! These boys will be fightin' those dirty Reds! And possibly some Blackshirt ISA fascists.

Now you just need some Kansans to kill.