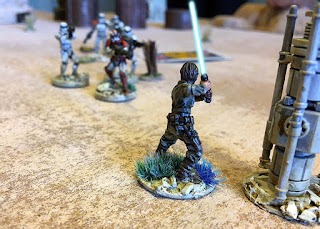 Just today, in my basement, not far away...
I had a really enjoyable play test for Fistful of Lead: Big Battles (working title) earlier today with Basement General Steve and his wonderful collection of Star Wars miniatures.
those that follow the blog will know we've done several play tests with large amount of troops and players, but I wanted a smaller go at it 2 players and 7-9 five man units a side. 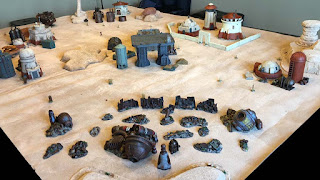 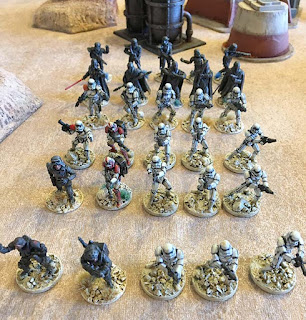 Imperial forces: 6 units to the Rebel 8 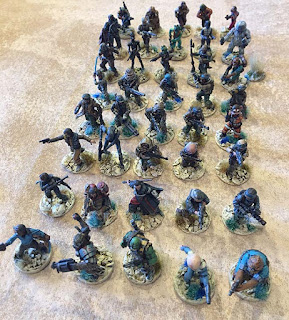 We used stats for the troops pretty much as it from our Galactic Heroes games. The Rebels had wide array of mercenaries, loyal rebels and scum led by Luke Skywalker.
The Imps had hordes of faceless minions led by Vader himself.
Both had the goal of securing the landing pad, but each had secondary objectives.
The rules? Pretty much Fistful of Lead. Except instead of 1 card per miniature, it's one card per unit or Hero. Special cards do what they do.
First blood went to the Empire. The Rebel dead piled up. As with most games played with "modern" weapons, getting caught in the open is terrible.
Enter Luke Skywalker. By the end of the game he had wiped out 4 Imperial units by himself. The key was waiting til a unit had racked up sufficient shock to make them nearly combat ineffective. Before they could rally Luke waltzed in and destroyed them,
Vader did some damage too, but came under heavy fire from Rebels in cover and was put Out of Action. 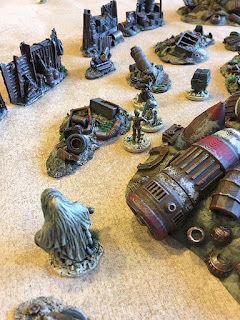 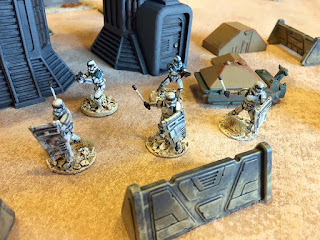 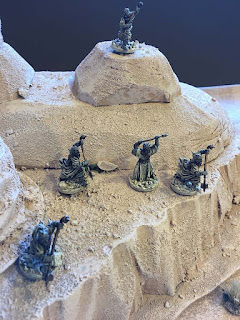 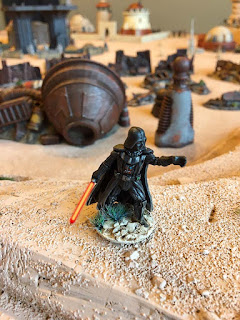 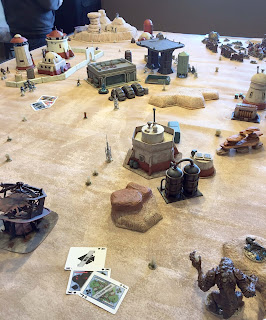 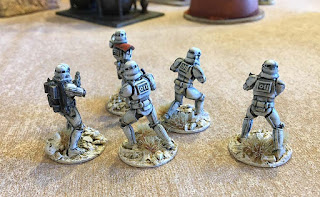 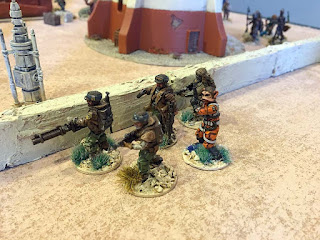 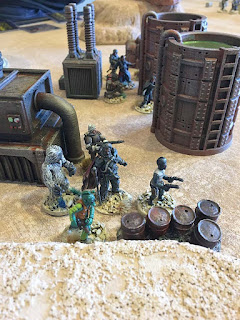 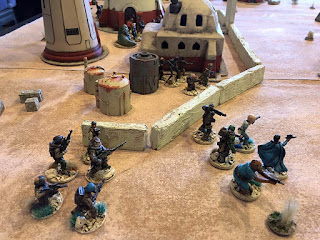 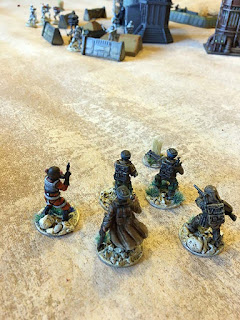 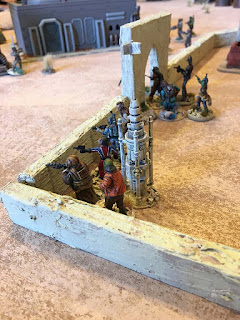 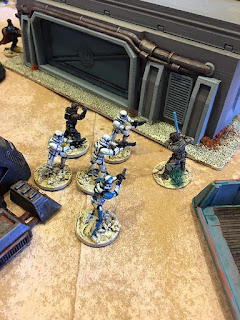 The Imps played the Joker first and earned the loyalty of the Tuskin Raiders. They came down from the hills and earned the "Kill of Day" by wiping out a fresh Rebel unit to a man.
I'm obviously biased, being the creator, but I had a great time. It was the game of Star Wars I've been wanting. Biggest compliment came from my opponent who had just been soundly defeated: "When can we play again?".
I have an idea for a scenario... 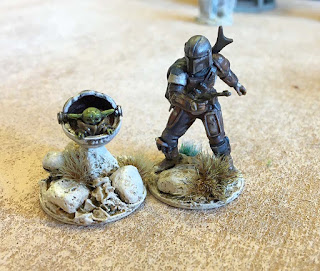 Posted by BaronVonJ at 3:44 PM

Love the sound of these rules and can't wait for them to be released. More importantly, where's the Mando and Baby Yoda figures from?

This is so cool! I love the idea of a big battle set! Of course your games always look great! Really like the baby Yoda fig too! I am anxiously waiting for this set of rules. Big battle is my default for Star Wars and scifi in general! Take my money please!!!!

Thanks. I'm a huge fan of all your rules. I own them all.

Looks fun - are units always in 5’s? As it would be nice to have a few options on unit size - such as units of 3, 5 or 8 - but obviously that may impact the cost/abilities they can have.

Simon: Sorry. No idea. Aren't my minis.
John: Thanks
Mellis: Of course not. size of unit is whatever you want. Our colonial games are 10-12 miniatures. I don't believe in "points" for building armies, so it'll be up to you for balance.

This looks very interesting. Does the whole unit live or die at the same time, or do you remove figures from units as they take hits? I'm thinking of heading to Salute this year to get a look....

Just like in the "regular size" rules troops can get shock or removed. Say a unit takes 3 hits. The attacker would roll 3 dice on the wound chart. Maybe he rolls 2 shock and a wound, The unit would remove one miniature (or stand if playing that way) and take 2 shock. If the shock is ever more than the remaining miniatures left, the unit falls back or routes.