With the Labor Day weekend, the ranks of the Basement Generals dwindled to 3 last night. Perfect size to try some play test of some ideas I've had knocking around.
First up: "Big Skirmish Size"
Fistful of Lead is a very low level game. Squad size, you might say. Most players are limited to 5-6 miniatures because I've found that's about all most people can keep track of. There's nothing wrong with this. It actually fits a sweet spot in the hobby. But, if you want to put a mass of minis on the table, you gotta up the game.
What I did was actually simple. A group of 3-4 miniatures functions in all ways like a single miniature. You are dealt a card for each group. They all activate together and do the same actions. One die roll for shooting/close/combat/recovery.
I left the leaders as one miniature. This makes them suitably heroic, taking on mobs of troops seemingly alone.
When a group take a wound, remove one soldier. Now the group  has the all the modifiers a wounded figure would have in a normal sized game. These negatives can be thought of as reduced firepower due to the reduced guns firing. Same with close combat.
When an Out of Action result comes up, remove the group. They've lost the will to fight!
How'd the game go?
I had a small garrison of Villistas defending a village, waiting on reinforcements. They were attacked by twice their number. Each player had 4 groups of 3 miniatures, and a single Hero. 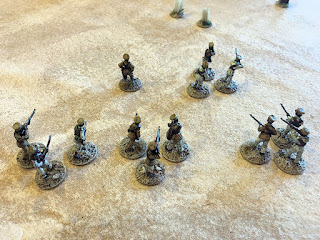 The opening attacks were brutal. They either threw a bit of shock on the troops or put the group out of action. 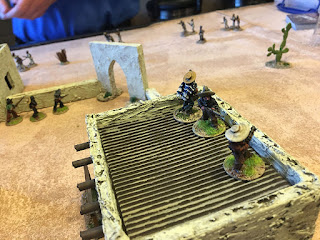 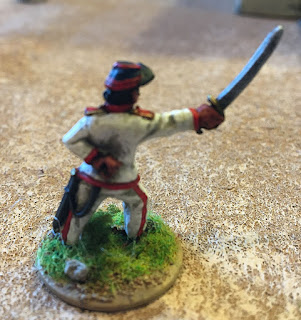 A couple of heroes traded shots until the defending Villistas lost their hero. 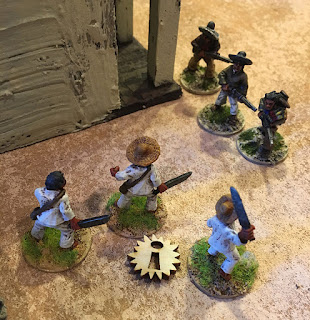 Some machete wielding shaken peasants attack the defenders. It did not go well.... 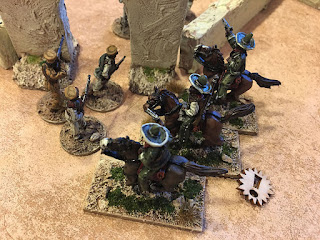 Reinforcements finally arrive, but don't hold up well to close range rifle fire. A fun and quick game, It looked like a much bigger game than it was. 50+ miniatures on the table and the battle was over in a hour.
Time to reset for next game!
Next up: Getting Meideval
We tried a fantasy play test a few weeks ago. Things went really well, but I got some great suggestions from the Fistful of Everything folks to try armor a different way. Using the tried and true "Armor Save" that so many other games use.
The game: 3 Knights and retinues class in a small village. Knights got a save of 5+ for their heavier armor (also a reduced movement), retainers a 7+, and the lowly archers 9+.
These saves were made before the wound roll was made. 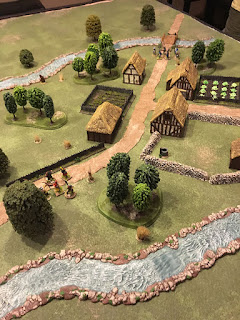 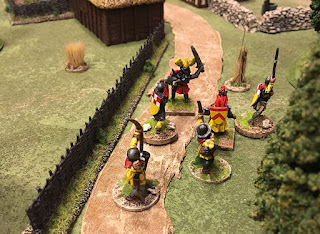 I know. I know, The knights are wearing antiquated armor compared to their crew. It's what I had on hand. 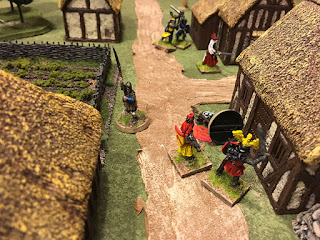 A bit a archery started the fight. Lots of "1"s which we thought of as a bow malfunction that required a "reload" marker. Then the close combat started. I won't go into all the weapon modifiers but suffice to say big heavy weapons are slow but damage more, while the trusty sword is quicker.
We spent quite a few turns banging away with armor saves stopping any real damage. Which, I guess, being a more close combat type game makes sense. Being able to shove losers away helping getting overwhelmed.
About halfway through, we decided shocks and wounds would effect saves, judging that a wounded and banged up soldier wouldn't be as effective at using his armor. This still gave a longer game, but resolved things faster.
Two fun, informative games!
Posted by BaronVonJ at 1:07 PM

Great gaming table and good job on the knights!