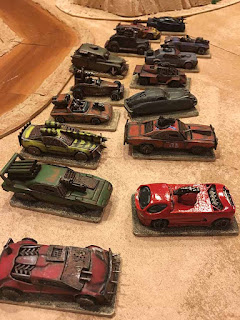 Junkers from across the Badlands gathered once again for the race for the Wastelands Cup. The Murder-Mobile piloted by driver Psycho Steve Simms took the pole position to defend his title.
The flag dropped and once again the Badlands echoed with the roar of engines. 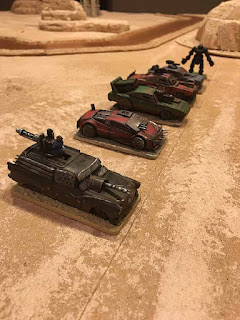 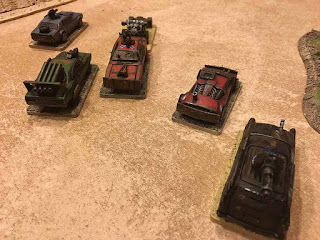 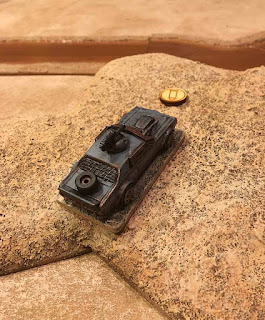 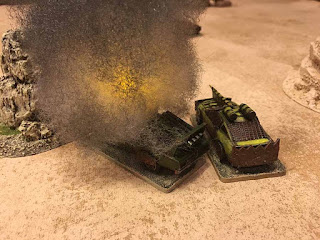 We used the venerable and free Axles and Alloys. It plays well for the convention style games we run. We had seven drivers that had to make 2 laps around the track. To activate your guns you had to cross the bullet plate. A huge pile up in front of the first check point meant only 2 drivers had guns first part of lap one.
Anyone eliminated the first lap got a back up car, most;t so they wouldn't sit around and drink my booze. Before turn one was over, we had 4 cars burning. Two from skids into rock formations and two from rams. We also had a driverless car driving around after the driver was capped with a lucky shot... 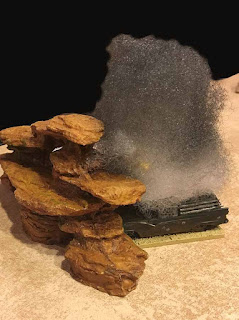 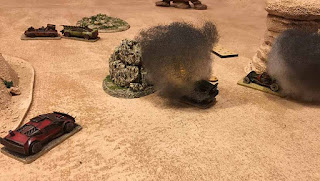 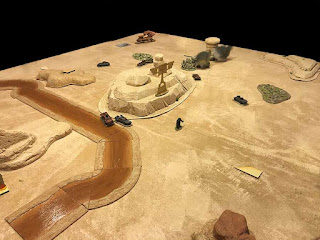 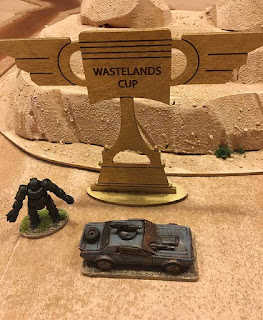 Pyscho Steve managed a dirty trick and took a shortcut to win for his second time. He had only one damage point on him.
Next A&A game will be big rig escort.
Posted by BaronVonJ at 1:13 PM

Was there a single bullet plate? Is the idea to have a choke point where there will be lots of rams and mayhem (and prevent a turkey shoot on the start line)?

WE had them spread around. But yes, guns don't go hot oil later to prevent just that.

Great stuff. This may be what I've been looking for to get my boys doing something more creative then blowing up pixels...

Ah the shot cut trick. We had that done once, then the second time the racers found the J.Sullins memorial land mine field.

Man, I miss Thursday gaming with you guys!

Looks great and sounds fun. What's not to love!