... or the Emperor Weeps for his Fallen. 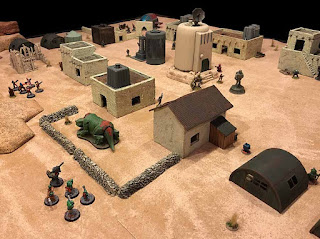 Second playtest went well. Whereas last week was more of a straight up "hard SciFi" shoot out, last night reminded me more of the glorious days of Rogue Trader. We even packed it with ancient lead from those times.
The Mission: a group of heavily armored, genetically enhanced super soldiers, let's just call them "Space Marines" for now, had to get through a disreputable backwater space port with a robot carrying the plans for a super weapon: the Doom Moon! They had to cross the length of the table to landing pad 1, where a group of not-so heavily armored, and definitely not genetically enhanced super soldiers, had secured the pad. 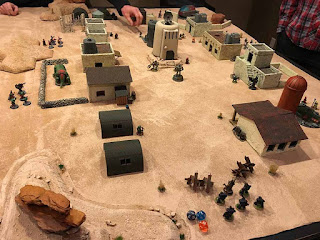 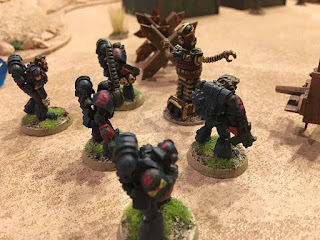 If getting across a space port teaming with underworld scum wasn't enough, the robot in question only had half the plans. The other half were being carried by a random robot somewhere in the space port.
The underworld factions consisted of the Robot Legion: mechanical mercenaries for hire, Team Green: Brutish Ornk bandits, Orange Julius and his gang of female miscreants, and desert scavy scum.
The sketchy spaceport security would also prove to be a factor. These "Mall Cops" were of questionable ability, and only used a d8 for the game.
The game started with a Team Green mini Ornk sneaking up behind a grazing Reptosaur and blasting his blunderbuss in the air. This spooked the otherwise docile beast and sent it careening toward Orange Julius's gang. They scattered but had attracted the attention of waiting Guardsmen. Julius and a few his girls went down in a blaze of pulse rifle fire. The Reptosaur rampaged most of the game.
In retaliation, one who become known as "Bare-assed Betty" stepped forward to avenge her boss. In the swirl of combat, poor, conscripted Guardsmen had bunched up. Betty stepped forward and caught 3 of them in a burst template. One became shaken and two taken out of action.
The Guardsmen at the landing pad managed to find the other robot carrying the plans on their first try! Now it was a matter of keeping it until the Marines arrived.
Speaking of Marines, they were attracting buckets of bullets from every direction. One went down immediately. Grab his Geneseed! 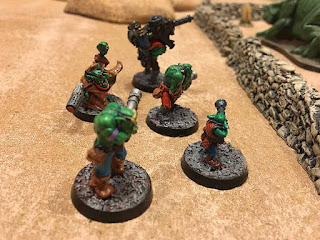 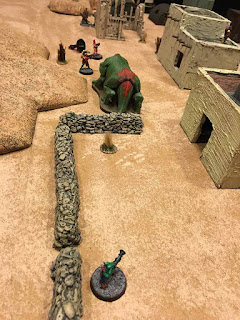 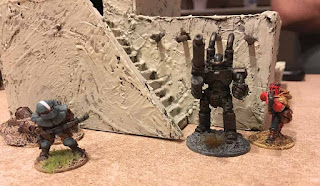 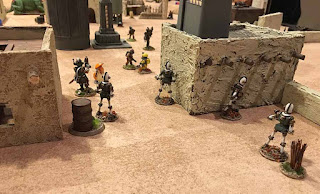 The Joker was shuffled in and had a dark purpose to sew chaos into an already chaotic battle. Whomever played it got control of the security team until the next player played another Joker. Their ever shifting alliance was a joy to behold. We wrote this off not as deviousness on their part, but complete ineptitude. The shooting started and they had no idea what was going on. They just fired at whoever they thought were bad guys at the moment.
The Spaceport landing pad was set up to be a fortress. The Guardsmen manned the walls (much to the chagrin of the Marines who really needed them to come out and clear the streets). They blasted the oncoming Robots to pieces. That was, until the they came within range of the Robot's mazers. These little beauties fire focused microwave beams. As long as the robots could see them, cover was no protection! Whoever didn't die the horrible death of bursting like an egg in a microwave, was at least getting a tan.
The chaos continued with Marines and Guardsmen dropping under the unceasing blaster-fire. Finally one lone Marine, escorting the plan laden robot, made it to the landing pad. He had only to cross the no man's land between cover and ship. 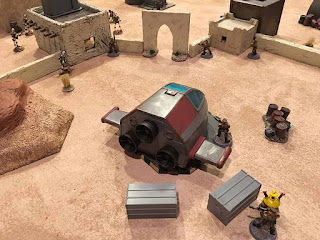 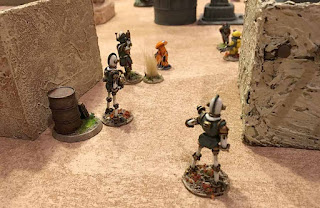 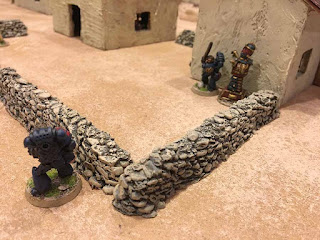 I pause here to point out a rule we tried, the Hold or Overwatch action. On your first action you can elect to hold your fire, If, later in the turn, someone crosses your field of fire, you can interrupt to fire at them with your second action at a -1. I never liked it for Fistful of Lead. I turns most games into defensive affairs with everyone hold up in their cover. However, it felt right for future combat.
No one uses it, until now. Three different shooters were now on overwatch waiting for that Marine to cross that space. Only his armor, and his faith in the Emperor saved him.
Plans delivered, game over. Time to call in an Orbital strike! 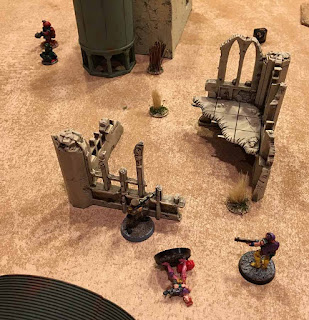 RIP Betty. Orange Julius would have been proud. 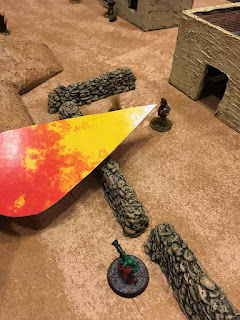 Marine 4 feels the heat.
Some things we tested:
Robots: Having no sense of self preservation, they do not dodge and weave like most living things. Therefore, they are a +1 to hit. However, their fearlessness also means they cannot be pinned (or shaken as we now say).
The Super Soldiers: Hardened Vets. They use a d12 for everything. Armor, they are a -1 to hit and have a -1 to be wounded. More than once they took no kind of damage. Enhanced Comms: they get an extra card as long as their are at least 2 left. They then discard a card of their choice. Things they probably should have: Fearless, ignore multiple shock markers (something we are also trying).
And a host of new weapons.
So far, so good.
Posted by BaronVonJ at 10:09 AM

I am so waiting for this to come out, I have a bunch of Infinity models that are waiting in the wings to play. (As I don't have the mental fortitude to play Infinity, I can use the models for this)

Anyway to get on the play test group or see an advance copy? Just PM me on FB.

I am following these developments with interest

Sounds like a hoot of a game. It sounds like some rogue trader inspired insanity was happening. Looking forward to more information and iterations of the play testing.

Two things: (1) do you change ranges for weapons?; (2) shutupandtakemymoney. When will this be completed?

Great report and some interesting rules tweaks too..when will this be out?

Beast: Weapon ranges are basically unchanged, but certain weapons have longer and shorter.
Shooting for a March Kickstarter launch and delivery in Fall.

Looks great. Can I hope to see some demo games at Recruits?

Probably have copies by then. Hoping to have Kickstarter up in going in March.

will you release a pdf version earlier?

That wouldn't be very fair to the printed buyers, now would it?