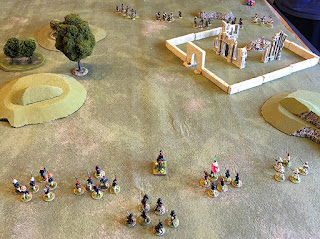 One of the great parts of working from home and part of your job is making games, is that you can playtest during the day, and it's still work!
With the Boy home on summer break, I grabbed every single mounted horse & musket era mini I had to test some ideas I've had rolling around for a larger scale skirmish game to add to the back of the Fistful of Lead: Horse and Musket rules. Yes, those are Hessian Jaegers fighting alongside the French Foreign Legion. Forgive me.....
Without giving too much away, the mechanics are basically the same as the FfoL family, but each player controls groups of troops instead of individuals. Think 25 instead of 5.
The Boy had some terrible dice rolls and we made up Officer rules as we went along, but it worked really well. 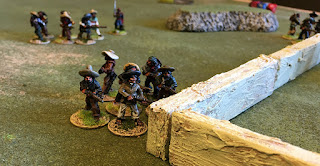 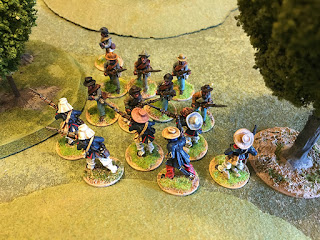 Today is playtest #2 with the notes we made.

On another project, I painted up some Warmaster 10mm Bretonnians. I bought in big when this came out in the day. They have languished in lead pile. I decided they work great for a two pronged project.
1- My yet to be named Medieval /Fantasy mass battle rules.
2- Some might have noticed the flag heraldry is from the World of Greyhawk D&D setting. LIke a lot of wargamers, D&D was my intro into painting miniatures and then wargaming. Though I never actually played in the Greyhawk world of Flanaess, I obsessively collected everything Greyhwak, including the Greyhawk Wars game which let you play a boardgame style world conquest game. I always dreamed of running it with miniature battles but never knew how to pull it off. Well, now I know.
I'll be probably add another rank, but leave room for a unit identifier in back. I designed the bases after seeing Simon Miller's (Big Red Bat) bases for his To the Strongest games. Thomas (SkullandCrown)  Foss lasered them out for me.
Posted by BaronVonJ at 10:53 AM

Jaye,
Love your idea of a larger game for Ffol. One of the guys I am gaming with and I are painting a bunch of Napoleonics for Sharp Practice 2. Would love to playtest the new rules. Our toys should fit what you are doing.
Bill

ONce I get it written down, I'll send.

Hi Jay- base looks good- would you like to try some of mine? The MDF is probably a little thinner and it's easy to chamfer the edges. Happy to fire a few over to you.