The Ravens come to roost: A Lion Rampant AAR 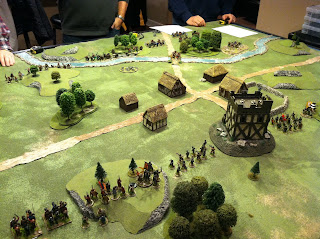 When we last left our Norman lord, Guy de Fountainbleu, he was high tailing it back to his stronghold after a crushing defeat. Confident in defending his home turf, his massed what was left of his men, and faced down Inaar the Redhanded.
His tenats were less confident and left town. 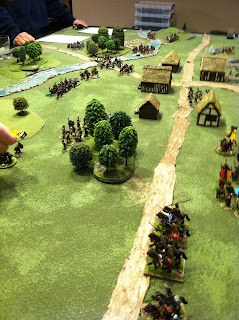 We had 3 Viking players each running enough points to get somewhere around 48 points of troops, while Guy and his faithful lieutenant (me) had roughly the same.
As I've mentioned in earlier posts, I've run these two forces several times and they've traded blows pretty evenly, so I feel they pretty evenly matched.
What was to follow was another complete beating for the Normans.
It started Guy not being able to motivate his men. After the last thrashing I can understand. Even with the house rule of at least being to move one unit, we still got a late start. 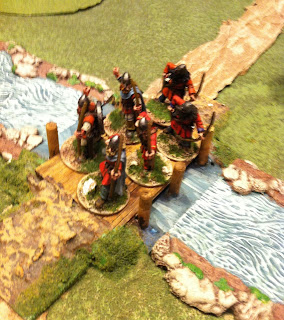 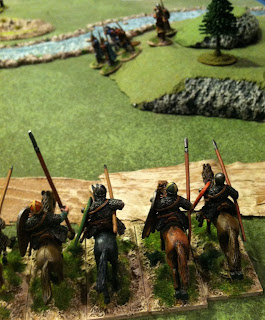 Guy thought he caught a break when some Viking bowmen were caught in the open. The heavy knights, pride of the army, charged right in. Unfortunately, the bidowers evaded, loosing a lucky volley that picked off one of the horsemen. A terribl Courage checked then failed forcing the horse back. What followed were sevrl truns of the horse making (or failing depending on your perspective) and charging the bidowers until they fell back into rough terrain across a stream where they were now evenly matched. Horse meat's back on the menu boys! 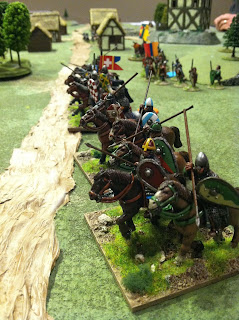 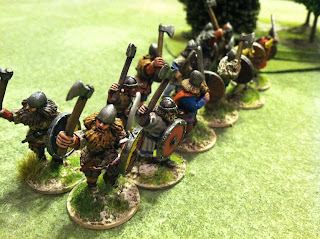 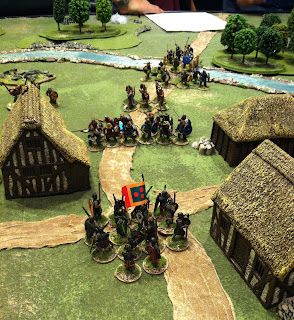 My own best laid plans to force out the viking berserkers were my horse could counter charge and crush them failed. It was me who was charged instead when my counter failed, where I was slaughtered by the barechested brutes.
In the end, the Normans may have broken one unit of the vikings, where we were systematically beaten to a pulp. I'm making just a few tweaks to the Norman lists, but it won't change Inaar wintering in Guy's keep.
In the meantime, Centaurs for Dragon Rampant! 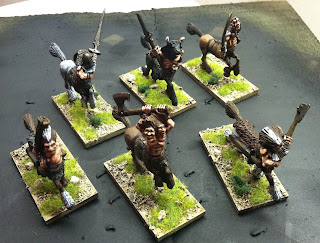 Posted by BaronVonJ at 9:31 AM

Oh dear, Jaye, with that final photo you are almost single-handedly forcing me to purchase "Dragon Rampant" . . . I've always had a soft spot for centaurs (and so have numerous models of them).

It's a great little game.