Lion Rampant- Battle of Two Crossings (or the Normans get spanked). 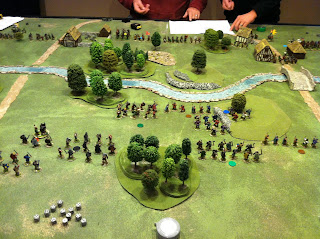 This was be the third time I used these armies, and I feel they are fairly balanced. The first battle saw a close tie between Vikings and their Norman kin. The second battle saw the Normans crushing the invaders. This time, Guy de Fountainbleu and his Norman retinue got walloped. 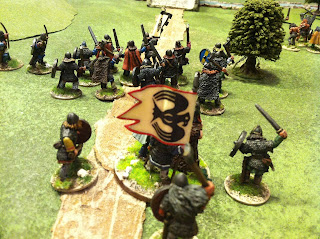 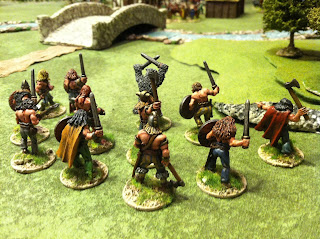 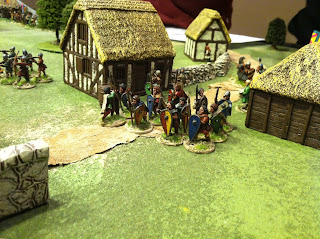 We had 6 players, 3 a side, each controlling 4 groups. Now that we've got a few games under our belts, we finished 2 hours.
The scenario involved control of two separate crossing of a small river. Both sides needed it to continue their respective campaigns.
The Normans had a tough go getting their forces moving. We have instituted a house rule, where if you fail to activate on your first try for the turn, that unit still gets to move (no shooting or attacking) then you are done. 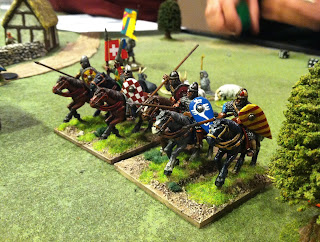 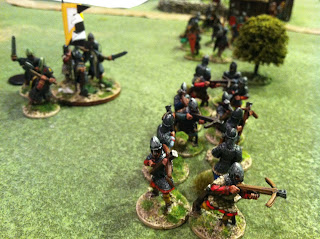 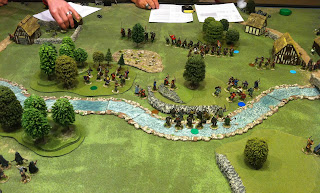 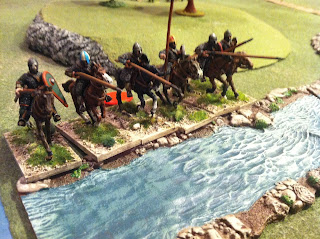 The battle? Well, there's no way else to say it. The Vikings rolled over the Normans. Some of it was good dice vs bad, but most of it was proper use the forces involved. Our bidowers got in the trees and sniped. Our rank and file formed shieldwall in important places and our tough guys charged.
Guy himself was able to defeat a Viking leader in single combat, and routed a few Viking units. Despite the beating, it was a lot of fun. All that chainmail and beards. How could it not?
The colored discs in the pictures are color coded to the guys reference sheets to remind them of the troop type.
Posted by BaronVonJ at 10:27 AM

All differing outcomes from each game sounds like they are balanced well to me. Looks fabulous great post.